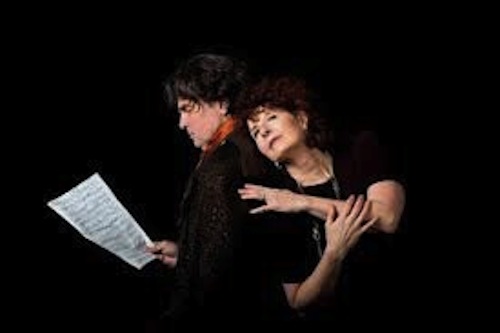 Like a spark of creation, Lyric Stage Company of Boston brings an inspiring, talented, and absorbing production of 33 Variations to the Boston community. Toggling between present day and nineteenth century Austria, 33 Variations explores the creative process, transcendental beauty, the meaning of genius, and the passions within us all. The playwright, Moisés Kaufman, is better known for his adaptations of real life events, including popular plays The Laramie Project and Gross Indecency. In 33 Variations, however, he takes creation of Beethoven’s piano masterpiece, the Diabelli Variations, mixed with the original story of a musciologist’s pursuit of what compelled Beethoven to compose thirty-three distinct variations on a simple, uninspired theme. At first glance, I thought I was in over my head. While Kaufman is one of my favorite playwrights because of his strong thematic storytelling, I thought that Beethoven’s lesser known but equally dramatic work and musicology would definitely be over my head. I appreciate being proven wrong.

The Lyric Stage Company features the play in a bare thrust stage. I expected that, like many of Kaufman’s plays, the scenes would short and varied enough that a unit set would not be conducive to the play’s story. The scenic designer, Cristina Todesco, and projections designer, Shawn Boyle, do an incredible job of depicting locations ranging from a doctor’s office and waiting room to Beethoven’s country homes. Boyle’s projections are sharp, clever, and engaging; really, they are worth the price of admission, especially the projections for the present-day library. The lighting also masterfully accentuates the play’s action, shifting from bright lights to softer and duller tones as we progress through the characters’ illness. The costumes are stunning in their historical accuracy, but also their ability to flatter their wearer. Charles Schoonmaker’s costume design makes every character go from a 7 to a 10 (director Spiro Veloudos assembles an attractive group of talented performers with which to begin). Moreover, the costumes perfectly suited each character’s personality and attitude, especially difficult and effective for the nineteenth century characters.

Veloudos impresses with his ability to keep the two-and-a-half-hour production moving at an alarmingly consistent tempo. Almost with a cue from his incredibly talented (I could listen to her for hours) pianist Catherine Stornetta, each scene blends seamlessly into the next with the appropriate suspense and anticipation to keep the story’s rather blasé topics seem monumental (also given the actors’ commitment to their respective roles and stories). This pacing is also a testament to the production stage manager, Maureen Lane, especially given the number and extent of scene changes. Veloudos and his actors tell the story in silence, an underutilized technique that allows each scene change to further the characters’ stories and the play’s plot. Veloudos has milked the play for each moment, each chord, and each resonance to provide a symphony of themes. I will not miss any of his next works, and I am disappointed that it took me almost four years to see one of his works. Veloudos is a master director, light on the heavy-handedness and high on the product’s delivery.

I must start with the star of this show: Paula Plum. A legend and staple of the Greater Boston theatre community, Plum astonishes in her transformation for this role. As Dr. Katherine Brandt, Plum must navigate the deterioration of a mother stricken with ALS (Lou Gehrig’s disease). Plum is vibrant and exciting in the play’s opening scenes. Her vivaciousness kept me on the edge of my seat, and I honestly wondered if she was miscast, seeming young enough to be Dakota Shepard’s Clara Brandt’s sister, not her mother. Slowly, with extreme care and precision, Plum isolates in each scene where the disease has afflicted and affected her daily life. What starts as a numbing sensation in her hands quickly spreads across her body, afflicting her like a stroke and reducing her to minimal and highly punctuated movements, first with a walker but eventually reduced to a mobilized wheelchair. Plum is superb in making these physical changes with consistency and skill. Honestly, her diction is better than most actors I’ve seen on Boston stages, even when Plum is speaking from a corner of her mouth. Every one of her words is accentuated with Dr. Brandt’s determination and personality. Plum’s resiliency will move you to tears as she tenderly embraces her changing condition, but Plum’s passionate quest for answers (and eventual understanding) is where Plum breaks ground as one of Boston’s best performers. Her performer is truly a masterpiece of character and scene study, looking both effortless and purposeful. Plum is a refined wine, appreciated at first encounter, but revered upon further understanding and inspection.

While I rave about Plum, the rest of the 33 Variations rises to the incredible task of playing opposite her star-studded performance. They each shine in their way, which makes them all of the more brilliant performers. Shepard’s journey as Dr. Brandt’s “mediocre” daughter is heartbreaking and sincere, yet a little one-dimensional in parts (though I blame this deficiency on the playwright’s lack of interest). Kelby T. Akin’s Mike Clark is a charming, endearing, and thoughtful partner for Shepard’s Clara. Akin is incredibly good looking, but he doesn’t let his looks carry the day; instead, Akin embraces the humor, the goofiness, and the underlying sincerity of Mike’s interest in Clara. His commitment to this oft-overlooked character is particularly impressive, given that at times he comes off as comedic relief and a mere plot device (again, playwright’s focus existed elsewhere). Mauren Keiller’s Dr. Gertrude Ladenburger is commanding, forceful, but caring, the perfect mix for a confidante and foreigner.

I was less impressed with the Austrian cast, though they lacked the compelling storylines. James Andreassi is a very passable Ludwig van Beethoven; he looks and acts the part with expressive ease. I was a little bored with his performance, but again, I blame that on my minimal knowledge of Beethoven. He strives to make me care for the tortured artist, but instead, it’s his servant, Anton Schindler, played by Victor L. Shopov, who steals the scenes. While Shopov performed with some of the same gimmicks, I realized that these facial expressions, moments, and movements were Shopov’s choices for the character. In fact, the consistency of his expressions and movements were what made Shopov so impressive in creating a fully-realized character. Will McGarrahan’s Anton Diabelli has the arduous task of performing under the pressure of lackluster material; like his character, McGarrahan’s role is just not that interesting. He performed suitably well given the circumstances. Together, however, these characters form one of the tightest ensembles, especially during a particularly brilliant Act I closing. That moment alone gave me half a dozen chills.

With a star performance by Plum and an especially strong supporting cast of interesting and dynamic characters, Lyric Stage Company’s 33 Variations is not to be missed. The beautiful music, gorgeous costumes, and stunning performances and story make this production easily one of 2013’s Must Sees (a tall bid in January). The production runs until February 2, 2013 at the Lyric Stage on 140 Clarendon Street, Boston.