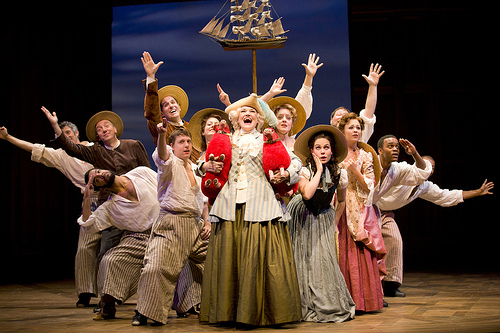 The Huntington Delights and Inspires with A New Candide

The rarely-produced Candide is a literary torment to stage; not only does the musical feature an impressive and daunting score, but there is a large ensemble of characters, numerous set changes through magical worlds, and a distinct comedic style that borders on the macabre. I can think of few companies other than the Huntington Theatre Company with the talent, resources and ambition to accomplish such a stunning production of this glorious musical. With the broad strokes of her delightful new adaptation of the classic Voltaire satire, Mary Zimmerman adds an artful eye to the minutiae in her staging and directing of the musical numbers, fluid scene changes, and ingenious relationships between the many featured characters and ensemble members.

The show opens with a traditional overture, but when the curtain rose I knew this production was anything but ordinary. The gorgeous costumes by Mara Blumenfeld make the stage glisten with the appropriate period and style, while adding just the right amount of information about each character. Most notably Maximilian and Cunegonde, played by Erik Lochtefeld and Lauren Molina respectively, wear ornamental costumes that beautifully match their lofty social status at the beginning of the show. Their costumes slowly transition to ill-fitting and simple outfits as they fall from their social positions. Most impressive, however, is the plethora of ensemble costumes that Blumenfeld and her crew have constructed. They were worth the price of admission alone as they transported me into the world of Candide perfectly.

I can’t say enough about the magic of Daniel Ostling’s awe-inspiring sets. Not a fan of black-out scene changes, I was worried that Candide would be a series of three-minute scenes followed by five-minute blackouts. How wrong I was! The most innovative (and appropriate) choice by the production team was not to delay the show with crew-assisted set changes. Instead, the cast members, in character as servants or members of the community, transform the stage to each new world. Ostling accents each world and story with minimal set pieces which are easy to maneuver on- and off-stage to keep the production moving at a steady whirl. I loved the woodwork in the main set, which almost serves as the hollow cavern of Candide’s life at important points in the story; at other times, the woodwork is the sides of city buildings and the inside walls of churches, with doors and windows magically appearing and disappearing for entrances and exits. The production also soars with beautiful set dressings, such as period china, flowers growing from the floor and ceiling, and red sheep, among other visual surprises.

Unsurprisingly, Candide features a highly talented cast of actors. In particular, I loved the ensemble; I don’t have enough words to describe the many nuanced choices made by each ensemble member in each of their numerous roles. These actors do exactly what an ensemble should do: create the world for the audience to immerse themselves in for the duration of the show. I loved Vanderdendur, a stuffy and greedy Dutch ship captain, played brilliantly by Rebecca Finnegan. Finnegan is so delightful in her vocal and acting abilities that I would’ve loved to see her tackle the role of the Old Lady. The Old Lady, played with gusto by Cheryl Stern, sounds tired and worn, especially in her musical numbers, which fits the character but sounded painful to me. Molina’s Cunegonde flourishes onstage, despite having one of the most difficult and breath-taking solos in the musical theatre repertoire. Molina’s “Glitter and Be Gay” is unrivaled in her interpretation.

Geoff Packard is solid in his performance as Candide; my friend thought his acting was underwhelming in comparison to his fellow cast members, but I think Packard recognized the comedic restraint in playing the “straight man” to the other characters’ wacky comedy. Some cast members developed the style better than others; Tom Aulino’s Martin never quite crackles with the same verve and satirical charm as some of the other characters, but Larry Yando’s Pangloss is a pleasure as the schoolteacher with the best of all possible philosophies and an energy that is unrivaled; I was anxious for his next entrance.

Zimmerman’s adaptation corrects many of the problems with earlier versions of the classic satire, playing more to the physical comedy and silliness. I found the dodgeball and methodically tossing of the balls an appropriate and humorous interpretation of war, and the earthquakes presented as a shaking of a model city as perfectly impressionist. Zimmerman’s impressive storytelling (which won her a Tony Award for Best Direction of Metamorphoses) is perfectly executed in this tale of Candide’s journeys and provides the audience with fluid transitions from one world to the next.

My one complaint would be that while I felt musically elated by the ending song, “Make Our Garden Grow,” I almost felt disappointed in its emptiness and simplicity. While visually stunning to watch, after two-and-half hours of spectacle and delight, the last moments were jarring in its return to realism.

The Huntington Theatre Company’s Candide is visually awe-inspiring, vocally impressive, astonishingly witty, deliciously funny and intellectually stimulating. I’m surprised to report few flaws with such a challenging work, but I will admit the style is not for everyone; though Zimmerman and her actors have created a world filled with ridiculous characters, the humor lies in the satire and irony of their words as matched with their worlds. I laughed aloud numerous times, but I noticed many audience members confused about whether to laugh or not. I suggest attending the show with an appreciation for the absurd and the ability to laugh at each other and ourselves. For truly, this production may be from the “best of all possible worlds.”

Candide is playing now through October 16 at the BU Theatre (Avenue of the Arts/264 Huntington Avenue) in Boston, MA.