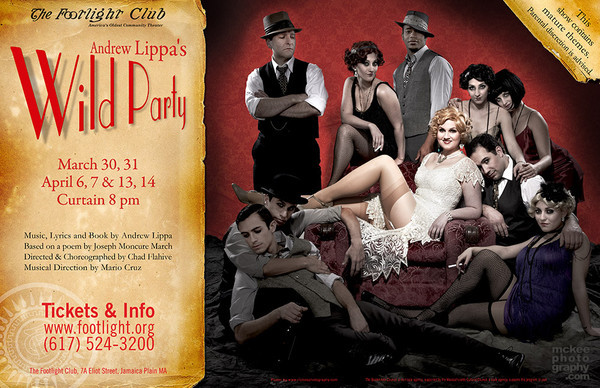 Life of the Party

Jamaica Plains’ Footlight Club boasts being the oldest community theatre in the United States, and it’s not hard to see why they have sustained for over 130 years. The Footlight Club attracts many talented actors, designers, and directors, but most of all, they establish a strong sense of community within its company. Their passion for the arts is apparent from the moment you walk into Elliot Hall. I thought it was a charming and delightful touch for artwork to be displayed in the lobby before the show, giving early patrons like myself something to observe and talk about with friends. A newcomer to the Footlight Club, I didn’t know what to expect, despite the hype that other audience members and reviewers gave to Footlight Club’s newest production, Andrew Lippa’s Wild Party. I quickly learned that I had a ticket to one great party.

I should mention that there are two musicals based on the obscure narrative poem by Joseph Moncure March (yeah, I’ve never heard of him either). Despite a playbill note that the poem was “wildly successful,” the poem was widely banned after its 1928 publication and exists in relatively rare form. And yet, two giants in musical theatre decided, almost contemporaneously, to write and produce two different musical adaptations of the poem, one on-Broadway and the other off-Broadway. The more popular (and better) musical is Andrew Lippa’s, ironically, the off-Broadway production. I wasn’t surprised to see that the Footlight Club had wisely chosen this version. Lippa’s Wild Party has its issues, but generally boasts a stronger dramatic structure for community theatre audience members to follow, namely, the love quadrilateral among Queenie, Burrs, Mr. Black, and Kate.

And I’ve never seen the story so good. Chad Flahive flexes some impressive directing (and choreography – more on that later) muscles in his production by teasing out the struggles and love between Queenie and Burrs. I’ve seen about  half a dozen productions of this musical, but for the first time, I got the story, due in large part to Flahive’s careful direction but also his strong cast. Leading the cast is Rebekah Turner, who plays knock-out Queenie with such charisma, charm, and vulnerability that it’ll make your palms sweat. Turner doesn’t shy away from the sex inherent in Queenie’s character, but she also brings a softer, more demure trait to the character that I found unexpected and appealing. Turner’s voice is dynamite, carrying much of Act I with her wonderful mix. Her partner in the evening’s tango-of-love-and-death is Todd Yard, who plays Burrs. First of all, Yard has an impressive voice. He has some serious training under his belt. I can’t say that I liked his voice for Burrs though. While he more than capably, and perhaps even stunningly, sang “What Is It About Her?,” a song that most tenors would struggle to nail, I thought his voice was a little too polished, a little too trained for the Burr-y the clownish and rough character. Honestly though, I only thought about it after I left the theatre because he is just too damn good during the performance.

His chemistry with Turner is electric. Did I think it could be stronger? Well yeah, but I know the book’s weaknesses in assuming there is a broken, but fixable, and horrible, but lovable relationship between Queenie and Burrs when the musical begins. Turner and Yard carry this relationship perfectly, particularly at the end. Turner’s remorse when she is left alone is a perfect resolution to the musical’s climax; I’d always seen Queenie mourning the loss of Mr. Black, but Queenie mourning Burrs just fit. I also appreciated that this production wasn’t afraid of making tough, unapologetic decisions. It’s a much harder decision to mourn a wife-beating, alcoholic, jealous, manipulative lover, but Turner’s commitment to this decision was so real and resilient that it seemed like Queenie’s only possible choice.

Of course, the evening would not be complete without two foils for Turner’s Queenie and Yard’s Burrs. Taryn Cagnina could carry the show on her Kate alone. One friend even argued that Cagnina was too good, detracting from the quality of Turner’s Queenie. I disagree. I found them wonderfully compatible and the stronger each of the women’s performances were, the easier I found myself slipping into the contorted web of love and deceit. Cagnina’s opening to Act II was nothing short of stunning. She had some big shoes to fill—musical-theatre giant Idina Menzel originated the role with her gargantuan belty voice- but Cagnina lives up to her legacy, and even exceeds her precedent, especially in her acting. Unfortunately, there was a missing link. Nate Haywood is a remarkably talented and attractive actor to play Mr. Black, a seemingly wonderful combination to find, especially for a community theatre. Haywood misses the mark somewhere though. Perhaps he is too monotonous in his portrayal of the mysterious, and admittedly, poorly written, Mr. Black. Maybe he tries too hard to emulate Taye Diggs, the original Mr. Black from the off-Broadway production—almost impossible shoes to fill given Diggs’ distinct bari-tenor voice- or maybe he was out of his league among the stunning cast previously mentioned. In any event, something was missing and I felt it in every single scene in which he was featured. Haywood shines his best in the soaring “Poor Child” with the other three leads; I’ve never heard this song and its difficult harmonies resonate so well.

My review wouldn’t be complete without mentioning of the incredibly strong supporting cast members. Madelaine True, exuberantly portrayed by Jocelyn Hesse, was stunning and almost brought down the house in her hilarious solo, “An Old-Fashioned Love Story”.  Equally dynamic were the brothers d’Armano, Oscar and Phil, played with appropriate campiness by Tyler Strawhecker and Matthew John Finn, respectively. These actors most notably carried the scenes while other actors had sparkling moments, such as Chelcy Harrell as Nadine. Overall, the entire ensemble is consistently supportive, exhilarating, and pitch-perfect in their ensemble songs and dances, particularly “The Juggernaut”. Kudos again to Chad Flahive with his simple yet extremely effective choreography and his assistant director Kevin Michael Morin.

I’d be remiss if I failed to mention the wonderful set by Brian Crete and his talented crew, including local painters. The art work was a clever touch that fully dressed the stage. The costumes were also consistently authentic, flattering, and fitting for each character, expertly designed and constructed by Maureen Festa. My only production concern were the lights; while masterful and clearly thought-out, I thought Paul O’Shaughnessy, Lisa (Coco) Coviello, and Sarah Parisi’s design a little too distracting, a little too imaginative. They were more than memorable but I felt like they detracted from the performance by shifting my focus from the outstanding actors onstage.

Catch The Footlight Club’s next production, The Three Sisters by Anton Chekhov in early June. Their production of Wild Party set the bar high, and I can’t wait for my next opportunity to see their passionately talented work!