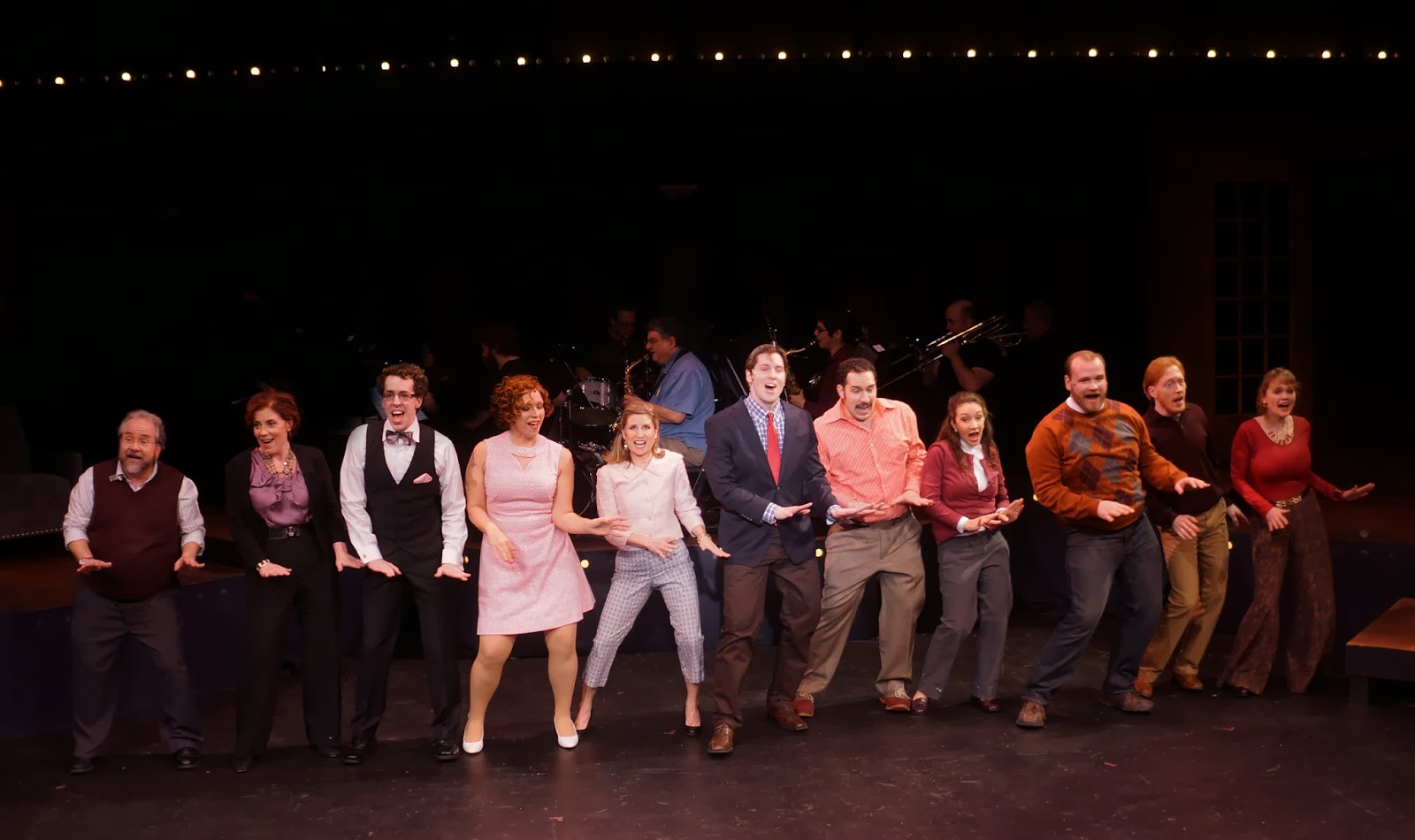 Company features one of my favourite openings to a musical; the haunting tones of the “Bobby” (and the many variations on this name) echo throughout the theatre, the mythical and almost fantastical element of storytelling about turning the dreaded thirty-five years old, and the overwhelming introduction to the many fast-talking, always-moving supporting characters offer so much life and anticipation for the introduction to this iconic musical. So, there’s that. In just a ten-minute opening, I feel like Sondheim has told me everything that I need to know to understand these characters, their stories, and their lives. It’s beautiful playwriting and composing.

With that introduction and lens into the play, I entered the incredibly versatile Nancy and Edward Roberts Studio Theatre at the Stanford Calderwood Pavilion at the Boston Center of the Arts with high expectations. Moonbox Productions is a newer company on the Boston theatre scene, and I’m just not sure where I would place them in the Boston theatre mix. They’re above the fringe scene (also, I don’t think Boston has a musical theatre fringe scene—someone correct me?), but they’re not quite to the professional level, despite attracting some outstanding Equity actors. Company gives Moonbox an excellent platform to strut their stuff. Led by Director Allison Olivia Choat, brilliant Choreographer Rachel Bertone, and the always-consistent Dan Rodriguez, the cast and crew tackle one of Sondheim’s most challenging works.

Companies (no pun intended) frequently miss the point of the Company; their Bobby is just not dynamic or interesting enough to keep the audience’s focus for the entire show. As Choat mentions in her Director’s Notes, in the play, “Bobby watches his friends, and we watch Bobby watching.” We are the ultimate theatre voyeurs, an interesting concept, if horribly disastrous in execution. Dave Carney stars as the Stephen Sondheim-substitute Bobby, a thirty-five year old bachelor with a perpetual failure to connect with the people around him. Carney is charming enough. I want to like and understand him. But he’s not quite to the level of a Bobby. Perhaps Mr. Sondheim wrote an unreachable archetypal character. Perhaps I’m just picky. Carney makes some excellent choices during his dialogue with his “company” but I never understand him. I want to.

I need to mention that Leigh Barrett steals the production as Joanne. No surprises there. This Equity performer with a dynamite reputation for musical theatre virtuosity is the star talent. Drawing from the iconic performers who have played Joanne (Elaine Stritch and Barbara Walsh, most notably), Barrett brings her own life and story to one of the more complicated characters in Company. Her Joanne is biting, but not quite the crass and coarse of Walsh, and not exactly the same crazy that Stritch brought to this strung-out woman. Instead, Barrett seems bored in the best way. Her “Ladies Who Lunch” brought down the house with its snarky and brassy commentary on herself and her peers. A nice touch was her relationship with Carney’s Bobby; it was very clear to me that the two individuals (despite their apparent age gap) were romantically and physically interested in each other. The glances, the touches, and the retreats made their scenes richly interesting to watch. That is the Bobby that I want to understand. Unfortunately, I didn’t find nearly the same commitment or storytelling in his other scenes.

The best work came from the girlfriends, which baffled me. What I had always considered mere throw-away scenes and fillers that said more about Bobby than any of the women, the scenes with the girlfriends offered some of the best acting and singing of the night. Easily the most dynamic was Katie Clark’s April, but she also had the most interesting character with which to work: a ditsy flight attendant who wants something more, namely, a man. Her “Barcelona” was both hilarious and heartbreaking, the far-off city which offers excitement but also neglect and perhaps a hint of regret; how many of us have chosen to pursue a career at the expense of a loved one or an opportunity at love? Also, surprising, Lisa Dempsey’s Kathy was a finely performed and interesting character (side note: her dancing was a wonderful and unexpected touch to this production. Kudos to both her and Bertone for having the guts and talent to make it work). Dempsey’s push-and-pull relationship with Carney nicely drew out Carney’s desire to connect while illuminating Dempsey’s tiredness with Carney’s wavering. The moment where Dempsey admitted to getting engaged to someone else is one of the few moments when it mattered less of what someone else was doing, but, instead, you watched the air get punched out of Carney’s Bobby. I wanted more of these moments.

While the rest of the supporting cast is relatively good, I found most of them forgettable at the end of the day. Shonna Cirone’s Amy never fully resonated with me, and I put some of the blame on Peter Mill’s Paul (side note: Why Andrew Winan wasn’t cast in the role, instead of merely playing the Swing and Paul understudy, is beyond me). Mill understands that Paul needs to reassure Amy, but he never makes the same promise or connection. My hesitation to offer commentary has more to do with my pickiness with this particular show rather than their lack of talent. They all boast impressive resumes with committed performances. However, something just felt off for me. I wanted more.

I put a lot of the blame on Choat’s direction and vision for the show. Bertone is a brilliant choreographer, yet, the choreography borders on the ridiculous at times. It’s simply too campy for my tastes for this show. I wanted the characters to stand and deliver. If they couldn’t keep my attention with such minimalism, then they shouldn’t be performing the show. No amount of spectacle should have distracted me from the heart and rhythm of the show. That said, as usual, Bertone makes these actors look gorgeous and motivated through her movement and choreography. Choat never seems to coax the same motivation out of the dialogue. Enough said. The other difficulty is the disconnect among Dan Rodriguez with his orchestra and the actors. Sometimes, they seemed to be performing different songs, not to mention, a different show. I know Rodriguez is better of work, so I put a lot of blame on the orchestra or lack of rehearsals for the three to coordinate.

So, there was a lot that annoyed me about this production, but, as I mentioned, Company is one of my favourite musicals, and I might have one of those unattainable expectations for any production of it. It also might be one of those difficult shows that, although we all seek to understand it and Bobby, we might never fully grasp these haunting tale of an inability (and emerging desire) to connect. But, like so many others, we keep trying. The story deserves to be told, this production deserves to be seen and discussed. I just wanted more.