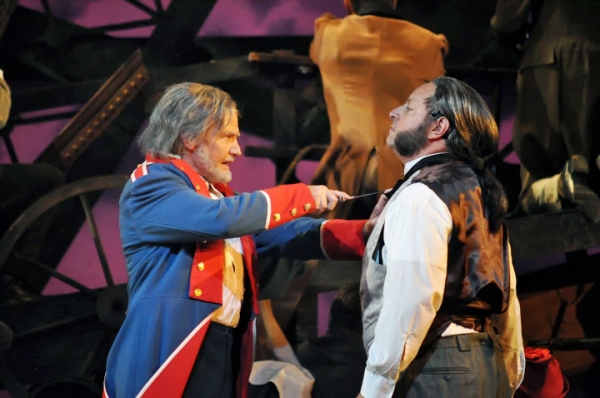 “A Heart Full of Love” for Reagle’s Les Misérables

Some of the best reviews are the hardest to write. When the lights rose after the curtain call of Reagle Music Theatre’s Les Misérables, I didn’t know whether to clap or cry. Disclaimer: Despite a few attempts to see this show in the last five or six years, I have avoided it because of a fantastic production that I saw in London. However, Reagle’s production exceeded expectations ten-fold. With few blemishes, this production shone as true mastery of the professional possible in the Greater Boston area.

Leading the helm is Ivan Rutherford as the former-convict-with-a-heart-of-gold Jean Valjean. Rutherford boasts an impressive resume, especially with his 2,000 performances as Valjean. While Rutherford seems a tad old in places, he never lets his age slow him down, throwing himself into the production and role with gusto. He strains for some notes in parts, but he knows where and when to hit the high notes. He is truly a master at the role, and he finds every moment to tell his story through the show’s difficult score. His nemesis, the infamous Javert, played with staunch impartiality by Doug Jabara, is equally successful. Perhaps I enjoyed Jabara more because of the unarguable disaster of Russell Crowe in the newest film adaptation. Jabara can sing and act circles around Crowe and he proves that film actors are not match for Broadway talent and stars.

Angela Richardson tackles the role of Fantine with her own style and interpretation. She has the burden of comparing with Anne Hathaway’s moving performance. Richardson is very accomplished and hits all of the right notes, but something falls flat for me. Maybe I secretly wish that she was playing Madame Thénardier; maybe I can’t help but imagine her in the other roles for which I’ve seen her. And then I realized how little Fantine means to me for the show and I moved on.

Thénardier and Madame Thénardier are a hoot, played by Rick Sherburne and Maureen Brennan, respectively. “Master of the House” was a delight to watch, and broke up the seriousness of the first act perfectly. However, much of their success also came from the engaging and skillful ensemble. While many of the leads were talented, the ensemble is where the talent really shines. The ensemble, collectively, tells the story beautifully, with the appropriate humor, grit, and pathos. They understand how they fit into the story and step in multiple characters (often different ages and classes each time) with seamless ease.

Few groups in the ensemble are as talented and committed as the Student Revolutionaries. Led by David Carney as the talented and passionate Enjolras, the Students sing their way into our hearts. Their relationships are complex, interesting, and poignant. The audience is drawn into their story and commitment in ways that few ensembles can do. Their “Do You Hear the People Sing?” is haunting and compelling; their “One Day More” is passionate and committed. They truly sing through and with their hearts, and it shows.

The greatest talent, however, lies in Ross Brown’s charming and alluring Marius and Mara Wilson’s wry and passionate Éponine. Their relationship transcends the source material and “A Little Fall of Rain” rises from one of the oft-overlooked numbers to a show-stealer. Honestly, anything Brown does is magic for me. He has the skill to master any role that I’ve had the pleasure to see him play, and he makes it all look so easy. The difficult “A Heart Full of Love” soars above the rest with Brown’s charm and commitment. Wilson’s “On My Own” almost brings down the house in the beginning of Act II. Even more impressive is that Wilson is still in high school and manages to exceed talent twice her age. With so many productions of Les Misérables this fall, the Éponines and Mariuses have their work cut out for them to exceed my expectations after seeing Brown and Wilson. Unfortunately, I’m going to ignore Cosette. I hate the role to begin with and poor casting choices leave me unable to comment fairly on her performance.

Director David Hugo with help from Assistant Director and brilliant choreographer Rachel Bertone deserve numerous accolades for tackling and succeeding with this show. They create fluid scene changes, never letting the action fall, and the stage pictures were as beautiful as the singing. Dan Rodriguez is, as usual, a master as music direction, and he deserves his award now for creating and shaping such a stunning production of voices and sounds. This production exceeded all expectations, especially after a ho-hum Fiddler on the Roof earlier this summer. I can’t imagine how Reagle will or could outdo this production next summer, but I am definitely eager to find out. If this quality, heart, and talent is present in their typical production, consider me a season regular.