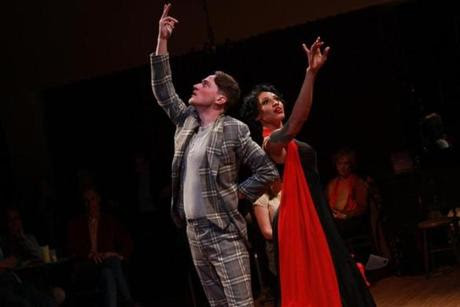 Bridge Repertory Theater of Boston was a My Theatre favourite in 2013. With a strong introduction to the Boston scene with The Libertine, Bridge Rep has quickly made itself known as one of the more professional fringe theatres in Boston. Though I missed their Not Jenny, I had high expectations for this season. Their talent is outstanding, their season is diverse, and their executive board is unmatched. And then they produced Hello Again.

Hello Again is the creation of musical theatre composer and writer Michael John LaChiusa. Never heard of him? Not altogether surprising. His work is musically esoteric, his plot lines divergent, and he rarely makes it mainstream. In fact, he created (the other) Wild Party, the one that made it to Broadway and then faded into obscurity with passing references in the musical theatre community. Adapted from the 1897 play La Ronde by Arthur Schnitzler, Hello Again strings together a random assortment of sexual encounters and “love” affairs among ten characters in ten different scenes. LaChiusa improved upon his source material by setting each scene in a different decade of the 20th century, but he made the mistake of presenting them in non-chronological order. I don’t pretend to know more than a Broadway composer and adjunct professor at Tisch, but the musical is a flip-flopping mess at times. The order is never clear to me, except that one of the characters from the prior scene continues into the next scene, albeit in a new decade (and presumably a new personification of the character). While I understand artistically that we are blurring the lines between the sexual encounters and the boundaries of time (“Hey everybody, look how far [and not far] that we’ve come in our sexual and social relationships!”), I couldn’t help but just feel disappointed. The musical is a weak excuse to present sex in a provocative way; Bridge Rep heightens this attribute through innovative and immersive staging, but fails to explain why this play, why now, and why we should care about these characters, illustrating that perhaps they need to refocus their mission and execution.

To say that I was disappointed is an understatement. I waited to post this review in hopes that others may make up their own minds about the musical’s credibility and the company and cast’s delivery. I’m going to ignore the shaky technical aspects on the night that I reviewed this production; they were unfortunately glitches that could not be helped. The space in the Boston Center for the Arts’ Hall A is brilliantly designed. Scenic Designer Anne Sherer goes out of her way to involve and immerse the audience into the musical through the use of comfortable couches, tables for communal seating, and a “theatre-in-the-round” structure which draws you into the action at every moment. And Director Michael Bello does an outstanding job of using the space to his advantage; every inch (tables included) was used to tell each of these stories, allowing each audience member to see the stories from a different angle and different perspective. And the stories offer something for everyone. Beginning with The Whore (played by the brassy Lauren Eicher) and The Soldier (played by wooden Sean Patrick Gibbons), the musical sets in motion the search for love and sex, and more sex, in each of the scenes. While each of them is entertaining, almost all of them missed the mark for me.

You see, I believe that sex (and, more importantly, the search for sex) onstage is never about just sex. I’m going to disagree with Freud: Sometimes, a cigar is not just a cigar. Pursing sex is only so interesting; having sex (especially when you’re not participating) is not that interesting. What is interesting? Why you pursue sex, what you gain from it, and what happens once you get it. In general, I wish the cast, overall, had focused more on what drives them to pursue erotic and emotionally-charged intimacy. For instance, Gibbons is a solider about to go off to war, what does he need from Eicher’s The Whore? More than sex. In fact, the songs and scenes stagnate if the scenes are only about the physical. Not all of the scenes feel so contrived and blasé, but none rise to the level of emotional or intellectual stimulation either. Aubin Wise makes one of the strongest showings with her powerful (and thirsty) The Nurse and independent The Actress. With not only killer vocals, she matches her impressive musicality with fluid and interesting character choices and movements to bring LaChiusa’s work to life in each of her scenes. She is matched with The College Boy (played with naïveté and charm by Andrew Spatafora) for a passionate and fulfilling encounter on a table (where several audience members sat with a few eyefuls of action). What worked for me is that Wise and Spatafora created characters who seemed to have lives that extended beyond the short 10-minute scene, and they infused such life into their performances that I wanted to spend more time with them and learn more about what happens before and after.

I can’t say the same thing about the rest of the cast. While Spatafora does a nuanced interpretation of The Young Thing with both Jared Dixon’s stodgy The Husband and Gibbons’ emotionally aloof The Writer, the scenes lacked purpose or verve. Again, the moments of sex are exciting and exhilarating to see and experience onstage, but they left you empty after the scenes finish. Perhaps that’s part of the work; perhaps Bello highlighted the unfulfilled nature of sexual encounters and our deep desire for more. For me, I wanted to feel that the characters had learned or experienced something other than carnal pleasure, such that it was leading them towards pursuing something different, learning something new about themselves, or seeing the world in a different way. The music rarely drove the scenes forward, instead, offering a musical interlude to the scenes’ development. Music Director Mindy Cimini does a fine job of coaching the actors on LaChiusa’s amelodic mess of a score and leading a very fine band, but I think there needed to be more synergies between Cimini and Bello’s brilliance. It felt like song started and story shut off. It’s a classic problem in musical theatre for which we need more attention to treating song as dialogue and dialogue as music. Of course, it’s not helped that LaChiusa’s score features nothing truly memorable or hummable. His decision strikes some dissonance with his audience, but it also opens the opportunity for the characters and actors to treat the songs as more than a singable tune. Many of them tried this approach, but all to varying levels of success. Choreographer Stephen Ursprung infuses the piece with just the right amount of movement, and he seems to understand that less is more in this kind of show. His minimalist choreography allowed the actors to showcase their characters’ physicality without disrupting the organic realness of the scenes and world. Costume Designer Kathleen Doyle’s subtle designs were also appreciated, as they quickly delineated the characters and time period.

Overall, I can’t say that I enjoyed my evening. It was disappointing and it left a bitter taste in my mouth. Even as I reflect on my evening at Hello Again, I can’t help but feel used. Used for a cheap thrill and spectacle to see sex onstage. But I also feel used emotionally because I wanted so much more to these characters which never got delivered. Granted, I understand that the scenes are incredibly short and they should leave the audience wanting more. But I wanted so much more on a basic emotional level. And for that I can’t easily forgive Bridge Rep for toying with my emotions, leaving me feel empty and so incredibly sad about how we imagine, portray, and understand sex and sexual activity onstage and in our daily lives. Because, overall, we want more than the short intimate acts with someone else. We want power, control, companionship, escape, pride, youth, vigor, stamina, lust. We pursue such activities and such partners for even more reasons. Very few of these dimensions were played in Bridge Rep’s Hello Again. Instead, it felt like a cheap trick. I’m going to overlook and try to forget about this musical (hopefully, I won’t have to see it for a while), and say “Bye Felicia” to the unimagined staging and production.

A True One Man Show
Richard Curtis Returns with About Time
Out of Town Report: Vancouver Fringe, Part I