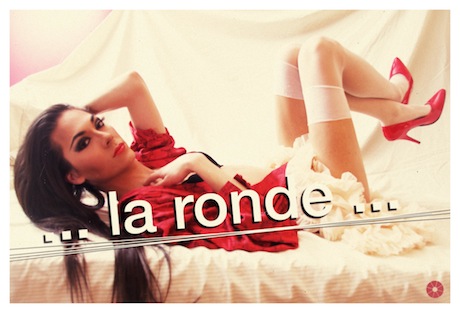 The Red Light District’s most recent production appeared daring. Staged at Toronto’s notorious Club Wicked, it featured a brave ensemble caught in various compromising positions as they navigated what was supposed to be a boundary pushing mashup of turn of the century Vienna and modern Toronto nightlife. Going in, I knew I’d be very out of place at Club Wicked, and squeamish about the many many many different ways I knew director Ted Witzel had invented to simulate onstage sex. But I was also familiar with Witzel’s work and knew that he’d never once staged anything that even remotely interested me on paper or failed to enthrall me in person. The company also featured a couple of last year’s My Theatre Award nominees (Eve Wylden and Michael David Blostein). So I steeled myself for the awkwardness I’d have to bear in order to enjoy the depth that the RLD always brings to their work.

But …la ronde… was nothing like I was expecting. At 7pm, Club Wicked is far from, well, wicked. Without its clientele doing their late night thing, the main section of the club is really just a weirdly decorated room with a cage in the middle and a bartender wearing a thong. And the play itself proved far less scarring than I was expecting. It was almost tame, really (everything being relative, of course). But …la ronde… also wasn’t what I’ve come to expect from the RLD; it just didn’t have as much to it.

The play was entertaining at times, but not entertaining enough to compensate for its superficiality- a concept completely out of character for Witzel’s work. It was frothy where it should have been seedy. And with the exception of a light touch on the plight of immigrant workers and a final point about STD testing, it didn’t say much of note. Using broad caricatures as representatives of sexual “types” rather than real characters, the one message ...la ronde… seemed insistent upon making was achieved through gender bending casting and the inclusion of a transgender actor. By taking the strictly heterosexual text and bending it to represent a more inclusionary modern landscape, the company seemed to want to shout “look, gay people have sexual encounters too!”. To which my response was “and?”. To expect a crowd of thoughtful Torontonians on Queen West to be fazed by a dildo or two seems very strange, as though the production was years behind its time.

That said, though the message behind the casting didn’t ring perhaps as clearly as it was meant to, drag queen Tyson James did prove the best thing about the production by a mile. As “the floozie”, James was a force to be reckoned with, a drop-dead gorgeous star in mile-high heels. Not only did James steal the show in his actual scenes (the opening and closing vignettes opposite an amusingly macho Milan Malisic  as “the soldier” and a predictably erudite though surprisingly well-intentioned “count”, played by Blostein), but he delivered one of the very few multi-dimensional characters. Sure, strutting along the bar and seducing passerby, “the floozie” was all predictable swagger and charm, but it was when she was the only character to offer water to the bound and incapacitated “sweet young thing” (Raffaele Ciampaglia) at intermission, that it really came across that James had developed something more than a floozie.

Aided mostly by Tyson with help from the bold and energetic ensemble, ... la ronde… was a fun theatrical distraction. What it wasn’t was an artistic entity on par with what I know this company to be capable of.