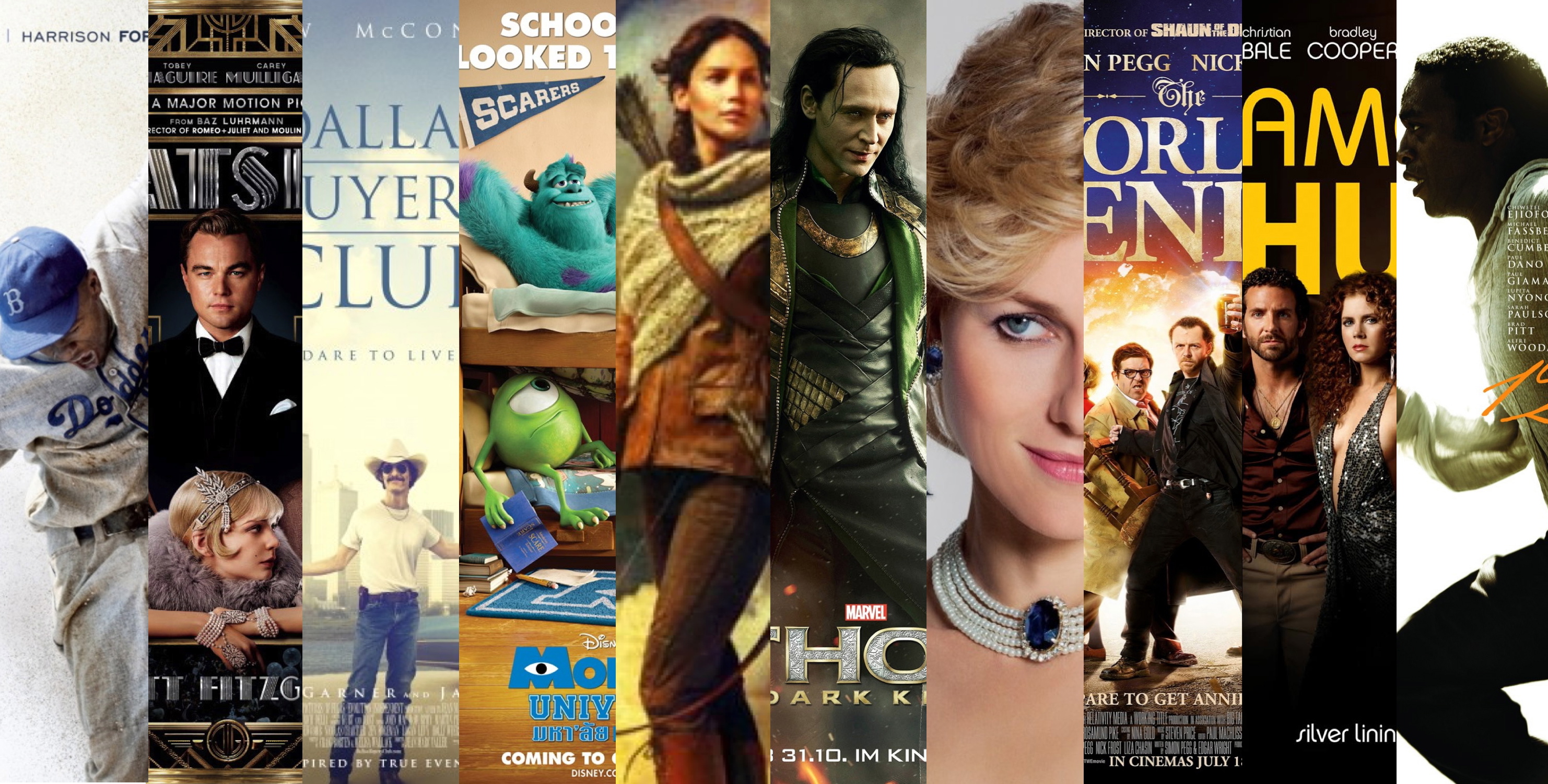 I saw 90 movies in 2013 (or shortly thereafter, if we’re being honest- I don’t know how anyone is expected to see all the Christmas releases in one week!). 90 is a lot of movies, or at least it is for me (I head up My Theatre and My TV, My Cinema is Rachael’s problem). I think 90′s a lot for anyone (to clarify- that’s 90 movies that came out in 2013, not movies in general). It’s especially a lot in a year that was something of a disappointment film-wise. Following up the greatness that was 2012, 2013 left me feeling a little uninspired. There were some highlights, certainly- some tiny movies, some huge, some blockbusters, some critical favourites, some flops that got a bad rap- but little of the excitement that I felt the previous year (despite 2013’s reputation as a great year in cinema).

20. 42
This movie was a little too by-the-book to really make many waves, but there’s a reason the book exists- it’s full of wisdom; no creativity, but lots of wisdom. 42 does absolutely everything right: start with an inspiring true story (Jackie Robinson’s), stir it up to maximize emotional value (feel-good script with lots of drama and some key comedy), combine promising new talent (Chadwick Boseman kills it in the lead role) with likeable familiar faces (I. Love. Hamish. Linklater! Plus a pile of TV standouts and the great Alan Tudyk playing terrifyingly against type) and at least one big star (Harrison Ford phoning it in just a little less than usual), release at a strategic time (perhaps right around “Jackie Robinson Day” and the start of baseball season when there’s not a lot of competition in the theatres). The result- a seriously enjoyable film that is liked by anyone who sees it but is forgotten almost instantly.

21. The Great Gatsby
This poor movie got the short end of the expectation-laden stick, but I thought it was pretty great. An excellent, complicated turn by Leo just happened to be overshadowed by his louder Scorsese role, and Baz Luhrmann’s thematically important decision to hype up the film’s flashy artificiality backfired when critics decided that the film was all looks, no substance (I feel that these people may have missed the point of the story a little bit). I’m never a huge fan of Carey Mulligan but Joel Edgerton and Tobey Maguire were fantastic (welcome back, Tobes!) and that soundtrack was killer. Leo and Baz did a fantastic job, even if they got a little bit panned.

22. Dallas Buyers Club
This was definitely the sneak-attack Oscar bait of the year and the second it finally got noticed, its sentimental flash turned awards season upside down. There was no way all-in performances like Leto’s and Matthew McConaughey’s weren’t going to take the gold. But when I saw this movie, very little had been said about it. Leo was still set to take home the Oscar and Jared Leto was remembered by one demographic as a rock star, by one demographic as Jordan Catalano, and not remembered at all by any other demographic. The lack of expectations helped Dallas Buyers Club stand out at the time but it also means that a film I liked back in November, 4 months later, now feels a little overrated. It was an engaging film with admirable acting and an inspiring story, but it never captured my imagination or my heart the way I’m now told it was supposed to.

23. Monsters University
D’awwww. What’s not to like? This ode to friendship, perseverance and doing things your own way is no Finding Nemo but it captures the spirit of the fish. (Quick Explanation: Finding Nemo is the film against which I judge all other Pixar movies because it’s my non-Toy Story favourite and judging things against Toy Story is just mean). It’s charming first, funny second, feel-good inspirational third, and full of important themes fourth. Monsters Inc wasn’t one of the big Pixars for me (I’m not even sure I’ve seen it the whole way through) but Monsters University was everything I wanted it to be and pretty funny for a sequel. Also, Billy Crystal.

24. Catching Fire
The second Hunger Games book (not to mention the third) is, in my view, vastly inferior to the first. It does introduce my favourite character (Finnick) but it’s essentially an angsty train trip followed by a Rue-less repeat of the events of book one. The redeeming bits come in the middle when we’re back in District 12 hanging out with Gale (somewhat annoyingly, I prefer movie Gale to movie Peeta by so much that it’s actually messing with my feelings about the characters- a detailed explanation of which can be found HERE). There was therefore no way I was ever going to like the second movie as much as the first (though, for some reason, everyone else seems to like it more). It’s not bad at all (though I do take issue with Finnick’s portrayal), it’s just a decent adaptation of a book that’s not as good as the first one, with few wonderful adaptation-related surprises left after the great thoughtfulness and strong casting of the first film (here’s to you, Seneca Crane). The one thing I will say is that Elizabeth Banks NAILS it with Effie’s newfound emotional attachment to her tributes. Her every scene still brings me to inexplicable tears, especially “we’re a team, aren’t we?” I’m getting chocked up just thinking about it.

25. Thor: The Dark World
So. Much. Loki. It’s almost too bad, because I really like Chris Hemsworth, and not just for his sparkly eyes and heart-stealing smile. I think he’s a pretty smart actor with great comic timing who deserves to be a really big star and sometimes even comes close to rivalling RDJ as the best-cast Avenger (though only sometimes, because RDJ). I also think the Thor movies, especially the second one, are pretty well written (witty and such) and sport generally solid supporting players (pre-Broke Kat Dennings! post-Chuck Zach Levi!). But I’m pretty sure I’m right in saying that no one watches Thor for Thor. Everyone is in this for Loki. As well they should be. I find it really annoying just how many annoying internet people are Really Into Tom Hiddleston. This mostly annoys me because I like feeling like I have at least somewhat unique taste and there is no world in which I could like Tom Hiddleston more. Now, I’m going to say that a huge part of that love is his Shakespearean pedigree (his Coriolanus was extraordinary) and his goofy grin/slightly oddball (read: non-Hemsworthian) looks, his self-effacing wit, eloquence, and endearingly excitable pedantry- and that’s all true. But, let’s face it, I fell in love with him when I first saw him play Loki… just like the rest of you. The wry delivery, the winking villainy, the buried humanity, the tortured soul, the inkling that he might somehow actually be right- Hiddleston’s Loki has me tuned in for an entire franchise, only about 1/4 of which he’s regularly a part of. And The Dark World made the best use of him yet.

26. Diana
Okay, let me explain why I liked a movie this incredibly panned: I don’t know very much about Princess Diana. I remember when she died, but I wasn’t old enough to have been particularly aware of her before that crucial plot point. Thus, I neither know nor care whether Naomi Watts’ portrayal of the People’s Princess is anywhere near accurate. I also don’t care how much of the story the film gets right (unless it gets a ton wrong, then I’m instinctively a little protective of Will and Harry’s feelings, but I think it’s not That far off). Because I know almost nothing about Diana, what Diana the film was for me was just a compelling love story between unlikely people in an impossible position. I felt (though I could be wrong) that the film managed to show both the victim and the vixen sides of the Princess, neither damning nor celebrating her disproportionately and thus letting her be every bit the dangerously charming heroine she reputedly was. Also, Sayid.

27. The World’s End
Here’s a movie that perfectly achieves all of its objectives. It tells a niche-market buddy story with simple, relatable themes like coming to terms with growing up and you can’t go home again. And there’s weird alien robot things. Pegg, Wright, Frost and co. aren’t trying to re-invent the wheel, they’re trying to tell a niche-market buddy story with simple, relatable themes. It’s a film with weird objectives, but a successful film is one that does exactly what it sets out to do and does it while being both entertaining and intellectually or emotionally engaging. It’s not fancy, but The World’s End does all that.

28. American Hustle
Important Note: I don’t get the David O Russell phenomenon. I think he’s a consistent filmmaker who makes movies I enjoy watching (to varying degrees, American Hustle topping his recent run) but I don’t see genius. Sometimes his writing is pretty snappy (that Hemingway speech in Silver Linings Playbook was fantastic) and he has an eye for talent (nabbing JLaw early and giving Bradley Cooper the roles of his career so far) but meh. I sometimes feel like he’s that guy (not unlike some of his actors) who has been up for Oscars before so will always be up for Oscars from now on. In a vacuum, I really liked American Hustle, it’s a thoroughly enjoyable film with a good mix of laughs and gravitas. In a world where it was positioned to possibly win the Oscar for being the best movie of the year, I’m just confused.

29. 12 Years a Slave
This is probably the pinnacle of my overrated Oscar movie journey (though there are many more on this list, rated as high as 16 and as low as 72). It’s a good film featuring some good performances in a fascinating story of massive tragedy. Objectively speaking, it’s all there. But what I don’t understand is the kerfuffle. I mean, people were calling this the greatest film they’d ever seen. I understand that the story is shocking but what, from a filmmaking point of view, is so astounding about the way its told? It’s a fine film, but I must be missing something because it seems to me that the only thing truly remarkable about it is the source material. This entire Oscar season had me feeling this way.