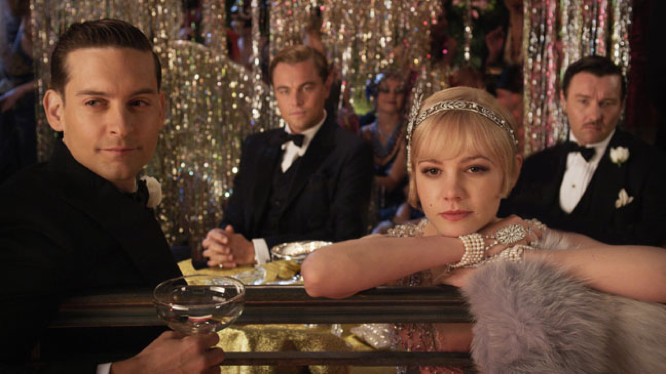 In many ways, Baz Luhrman was the perfect director to adapt The Great Gatsby. He really gets the idea of spectacle that covers up inner emotional turmoil (hell, that was pretty much the point of Moulin Rouge). And The Great Gatsby is all about the way the excess of the roaring 20s belied an inner emptiness. And Luhrman adores doomed love stories. He managed to imbue his adaptation of Romeo + Juliet with so much heart and feeling and utter absurdity that it made the tragedy fresh.

And in some ways, The Great Gatsby is a really good adaptation. Luhrman gets the romantic moments, the tortured soul, the thematic emptiness. In particular, the way he (and Cary Mulligan) craft Daisy into this destructive enigma is beautiful and so, so perfect and the scenes between her and Gatsby ring with a romantic emptiness.

But Luhrman is also too prone to spectacle. He takes the tiny symbolisms of the book and creates them, writ large, as tentpoles in his opus. The green light across the dock becomes an omnipresent beacon. The watching eyes become literally (and often) the eyes of God. Gatsby says “old sport” EVERY. OTHER. WORD. The spectacle (so beautifully done in the party scenes, the romantic wooing scenes) loses its meaning when the film loses its juxtaposed subtlety.

Most of the characters are fantastic. I wondered a bit if Tobey Maguire was a good choice for Nick Calloway, but his beta-male voyeurism merges well with Maguire’s tendency to seem passive on screen. And Joel Edgerton is fantastic and magnetic as Tom, which is really essential to sell Daisy’s waffling. As aforementioned, I really dug Mulligan’s take on Daisy, even though I’ve felt underwhelmed by her in the past.

In fact the only character I didn’t think was perfect on screen was the titular hero. It breaks my heart to write this – I love Leonardo DiCaprio and think he has done a fantastic job transitioning from a teen girl pin up into a worthy, talented actor. And I was excited to see him play Gatsby. He gets the characters awkward yearning, and there are some moments of comedy or pathos where I was so grateful that Luhrman chose him. But Leo fails to endow Gatsby with the effortless cool the character requires, and it hurts the story.

The Great Gatsby’s cinematic incarnation is an interesting mess, with gorgeous scenes and moments of beauty, but it fails to coalesce into a fantastic whole. It’s well worth seeing, but it wont make it into my upper pantheon of Luhrman movies to watch on repeat.