Wright, Pegg and Frost at The World’s End 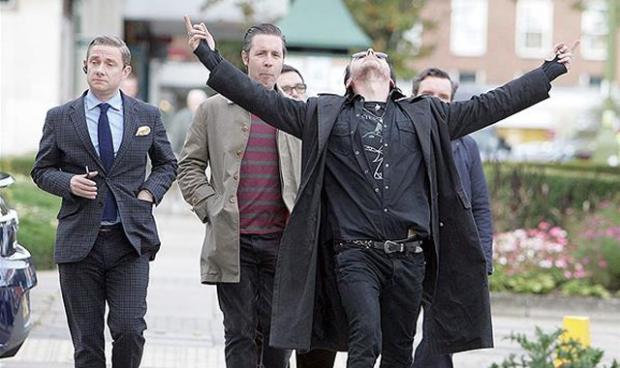 The World’s End, the final instalment in Edgar Wright/Simon Pegg/Nick Frost’s goofily-name Cornetto Trilogy, is a funny, touching, and visually inventive late-summer masterpiece. It’s easily my favorite of the trilogy (surpassing Shaun of the Dead in actuality, although I don’t know that anything can replace the experience of first seeing Shaun of the Dead with no expectations and just finding this fresh comedic voice doing everything I’d ever wanted done to the zombie mythology).

It’s also probably the darkest of all the films, ultimately making a fascinating argument about growing up and its importance that is almost the antidote to the grown up man child mythos that have been so popular in American comedies since Steve Carell first shouted out “KELLY CLARKSON” while having the chest hair ripped from his body. I’ll get more into the interesting psychology of the piece in a moment, but since that a) will involve lots of spoilers and b) kind of spoils the fun of it all, let’s first discuss just why this movie is so great.

It’s funny to me that these movies seem like such an antidote to the Apatow of it all, since Wright/Pegg/Frost and Apatow are responsible for the two television shows that I feel like speak most specifically to my experience of moving through the world (Spaced and Freaks and Geeks). The nerdistry and passion for film and excitement that the team first brought to Spaced is more than evident here, their budgets finally catching up with their ambition and Edgar Wright proving that the visual mastery he demonstrated in Scott Pilgrim is only growing with each passing year. The movie contains sly call backs to their own cinematic/television past, clever nods to classic horror and sci-fi films, as well as Wright’s now signature command of the camera, which turns a whip pan into the perfect punch line for most jokes. The man is literally the master of the insert show, making the act of pouring water somehow one of the most hilarious one liners of the summer. The call backs and nods and careful construction COULD start to grate, but because everyone involved has such a careful sense of where the line between cute and too cute is, the result is just a masterpiece of how to integrate clever plot structure, camera angles, and characterization.

The plot follows five estranged high school friends going back to their childhood town, Newton Haven, to finish the mythical “Golden Mile” (a set of 12 bars laid out along a mile of land. When they attempted the feat in their high school heyday, they made it through 9 bars before heading off into the sunset). The friends have all moved on considerably from their childhood selves, but all retain some essential evidence of their pasts. The only one who hasn’t moved on is Gary King (Simon Pegg) a man whose enthusiasm and substance abuse masks something emptier. Suffice to say, King is thoroughly frozen in that moment in 1990 when he and four mates almost conquered something mystical, and is desperate to recapture that sensation. He lies, cheats, and begs to get his other friends back together, including yuppy realtor Martin Freeman, aimless but fit Paddy Considine, adorably nerdy Eddie Marsan, and, most significantly, his former wingman turned straight laced corporate lawyer (Nick Frost, in a fantastic turn of the usual Pegg/Frost dynamic). The cast is across the board great. Pegg  in particular demonstrates impressive range, coming on the scene like a tornado of energy and one-liners, while still conveying the underlying sadness of Gary without ever giving himself over to maudlin lifetime moments acting. And it’s a particular joy to fans of these performers to watch Nick Frost slowly peel away the layers of carefully refined oppression to let loose with the man we know is underneath.

I don’t really want to get into the plot too much – I already feel like the trailer ruins the fun a little bit – but since you’ve all probably seen the other movies from these guys, you know there’s more at play than just a pub crawl. SPOILER ALERT: What’s most interesting about the movie to me is the way it deals with the titular end of the world. Ultimately, it makes a fascinating and conflicted argument about freedom and immaturity, about self-destruction and pain and growing the hell up. On the surface, the ending provides a fuck you to the idea of growing up and conformity, with a particularly fantastically anarchic speech delivered by Pegg. But the actual ending demonstrates the limits of that sort of freedom, and the nihilism inherent in it, and maybe argues for a middle ground? It’s exactly the kind of genre subversion that I’ve come to expect from these guys, with a handsome payoff for loyal fans.

I couldn’t have had higher expectations for The World’s End unless the word “Whedon” was attached to it, and it exceeded them. And if the world ever does end, I really hope I’m 12 pints in too.