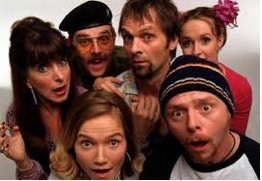 “Spaced”, the precursor to the modern laughfest

Hulu could be the greatest invention of all time. And that’s not just hyperbole. What started off as a great, consistent on-line streaming source of legal television has quickly begun to rival Netflix in terms of “great ways to discover old series you always meant to watch but never did and also catch the occasional weird ass art movie without having to pay for it.”

This week’s awesome catch-up is a cult classic that I never really realized was probably the most influential sitcom of the past 15 years: Spaced. The British series, which you’ve probably heard your geekier and semi-pretentious friend talk about from time to time, was the birthplace of Simon Pegg, Nick Frost and Edgar Wright’s particular brand of pop culture-obsessed, good-natured humor. This is what drew me to start watching the episodes at 11 o’clock last night. But what kept me marathoning the scant 14 episodes was that Spaced turned out to be a funny, sweet, unique show that also probably changed the way smart people make television.

Let’s back up and start with a bit of plot. The show is about Tim (Penn) and Daisy (Kathryn Stevenson, who I may now be in love with). Tim and Daisy are in their mid-20s and at a bit of a shitty crossroads. Tim’s just been chucked by his cheating girlfriend Sarah, and Daisy’s boyfriend leaves her alone in a piece of crap apartment with drugged out roommates. Tim works at a comic book shop, but wants to be a comic book artist. Daisy is a “writer,” which really just means she’s on the dole (god, that was pretentious. Basically it’s British unemployment) and does nothing. They’re homeless and directionless, reduced to squatting in coffee shops and sharing the real estate listings with people they don’t know.

Which is exactly how Tim and Daisy meet up. Over a few weeks of shared misery, they stumble upon the perfect apartment. Only caveat: the apartment wants a “professional couple.” So for the first couple of episodes, Tim and Daisy are stuck in the amusingly sitcommy premise of having to pretend to be a couple (complete with fake sex) while only just getting to know each other. As the series progresses, they deal with their perpetually drunk landlady Marsha, their weird-as-hell downstairs artist neighbor Brian, and their two respective best friends, the militaristic Mike (Nick Frost) and the airhead fashionista Twist. Throughout the 14 episodes, the core group hangs out, smokes a lot of weed, talks a lot about popular culture, stumbles into surrealist absurdities, and grows to love and care about one another.

The thing that makes this show work as well as it does is Tim and Daisy. From the first episode on, they are probably the two most normal people you’ll ever meet, channeling mid-twenties malaise without ever really drawing attention to what they’re doing. And although the supporting cast starts out incredibly broad, and stays incredibly broad (to their credit), they somehow sell them all as the type of people you actually want to hang out with.

But the thing that really struck me as I devoured this show was that Spaced really and truly laid the groundwork for almost all critically acclaimed shows since them. Really, the term “ahead of their time” doesn’t even begin to encapsulate the show. Many modern shows make overt references to Spaced (Community, Cougar Town, the American version of The Office, How I Met Your Mother), but even more than the specific gags which have come to populate this side of the Atlantic, I was struck by how revolutionary the single camera calm vibe of Spaced must have seemed among the multicamera tableau of the late 90s. Those lightning-quick cutaways that made Scrubs and 30 Rock so funny? Yeah, Spaced perfected those. Absurd genre bending (complete with both a zombie and a paintball episode) that is grounded in emotional reality? First there was Spaced, then Community. And incorporating absurdist edgings into an otherwise straight forward hang out comedy (oh, just about every critically acclaimed sitcom of the past 10 years, but let’s go with Cougar Town and HIMYM on this one)? Did I mention that Spaced has a robot fight club, prayers to the Buffy God, an extended animal testing break-in sequence, and a running gag about being unable to express your emotions except by cassettes with ungodly yowling on them?

As a popular culture historian, Spaced is required reading in order to understand the direction tv comedy has taken over the past ten years. As someone who also just really enjoys fantastic characters and amusing plots? Spaced is probably the most fun seven hours you can spend.

QUOTES: (it’s impossible to just chose a few, but here is me trying anyway)

Tim: “You’re scared of mice and spiders, but oh-so-much greater is your fear that one day the two species will cross-breed to form an all-powerful race of mice-spiders, who will immobilize human beings in giant webs in order to steal cheese”.

Tim: “She’s shallow, Brian. She’s like Cordelia out of Buffy the Vampire Slayer, and latterly Angel, the spin off series which is set in LA”.

Tim: “I just had a moment of clarity, you know, I woke up. It’s like… you know when you have an orgasm on your own?” [Daisy looks increasingly disgusted and uncertain during the following:] “You know, you’re sort of lying on the sofa watching some porn movie you bought on a drunken lonely night in Soho, and you’re lying there and everything’s going really great, you’re getting totally turned on by these absurdly graphic images, everything seems so right, and suddenly – phht! Bingo! You wake up. And you’re lying there sweating, desperately looking for the tissue which you know is still in your pocket, and the remote control which is somewhere on the floor, and it’s like walking in on yourself, you know? It’s just like “What you doing?” That’s how I felt tonight feeling my heart miss a beat everytime the door opened. “What the fuck are you doing?””
Daisy: “Well, that’s… love, isn’t it? Load of old wank”.

*** SPACED, in its entirety, is available on Hulu for free!