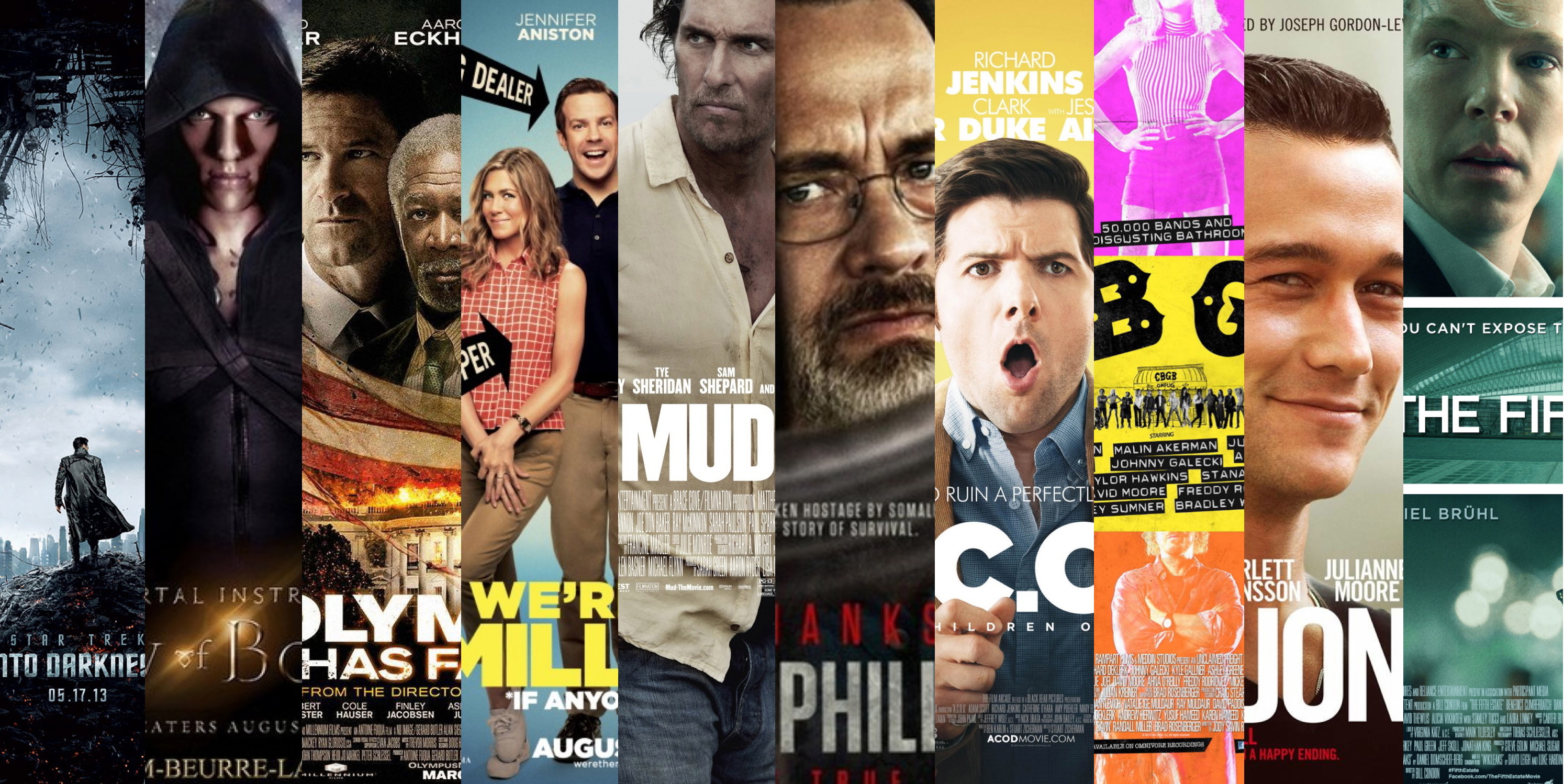 60. Star Trek: Into Darkness
A bland, unmemorable sequel to 2009’s fantastic franchise reboot. The women are dumb and/or naked, the villain is a cartoon, there is not enough of that kick-ass supporting cast (John Cho! Anton Yelchin! Simon Pegg! Karl Urban!). But Chris Pine is a really great Kirk and I think Hollywood would be just fine if it was all Quinto all the time.

61. The Mortal Instruments: City of Bones
Act three of this film is terrible. But everything that happens before Jonathan Rhys Meyers shows up is enjoyable enough that I found myself sincerely rooting for them to work out the budget to do the sequel. Jamie Campbell Bower is surprisingly engaging. Robert Sheehan is freaking adorable.

62. Olympus Has Fallen
This is the exact same movie as White House Down. Except it stars unlikeable brute Gerard Butler taking himself very seriously rather than incredibly likeable charmer Channing Tatum having a laugh while saving the world. Plot-wise, this is the better film. But, tonally, it’s just so much less fun to watch. That said, Aaron Eckhart was born to play the President.

63. We’re the Millers
This film was fine. Cheesy and predictable, but fine. It’s low-ranked but I really did mostly enjoy it. I love me some Sudeikis and, a loyal Friends fanatic to my core, I’m always happy to see Jennifer Aniston get a job. Oh, but it’s pretty dumb.

64. Mud
The least inspiring film in Matthew McConaughey’s stellar year, Mud is theoretically a backwoods coming of age story but it’s most just a moody mystery that’s not all that mysterious.

65. Captain Phillips
That last scene is genius but is anyone else massively bothered by the oldschool storytelling of middleaged-white-man vs. poor-black-boys? No, just me? There’s a great story here but it’s with the pirates, not Tom Hanks, and all this movie does is admire Tom Hanks while simplistic Africans growl at him.

66. ACOD
A direct-to-DVD dramedy where Adam Scott complains a lot while Jane Lynch studies why he’s so screwed up. The dialogue isn’t bad though- even if the story is totally over-played- and the ensemble is killer. The deliciously awkward highlight? Watching Amy Poehler play the sympathetically evil stepmother of her TV husband.

67. CBGB
One of the many films this year featuring an awesome ensemble cast in a somewhat lackluster vehicle, this haphazard punk origin story showcases all sorts of fun people pretending to be fun people of a different ilk (and generation). Malin Akerman (one of my favourites) stands out as Blondie’s Debbie Harry and I’m always thrilled to see Josh Zuckerman onscreen, even if his role is just exposition delivery in a badly executed framing device. Alan Rickman holds court, Ashley Greene tosses in a bit of sanity, it’s all fairly jovial and sometimes even a little bit touching. All over the place, but I guess that’s just rock and roll enough to work.

68. Don Jon
JGL’s long-awaited directorial debut is something of a non-entity. I like that he goes against type to play a lughead and I like that 53-year-old Julianne Moore is taken seriously as a love interest, but Joseph Gordon-Levitt exists in my head as someone with serious artistic credibility (hitRecord is so inventive and potentially important) so I was expecting more than a middling rom-com when we finally got to see him be more than an actor.

69. The Fifth Estate
What’s confusing about The Fifth Estate is that it seems like it would have been a fairly easy film to make really interesting. All the elements are there- a complicated and memorable antihero (played by one of the biggest it-stars of the year), high stakes, moral ambiguity, global consequences, cool technology, the list goes on. It could have been a really intricate political and personal drama, or a slick contemporary thriller, or a deep character dive that catapulted Cumberbatch out of TV star status to Oscar nominee. It’s baffling, then, that The Fifth Estate falls incredibly flat. None of the big stars give a particularly memorable performance (Cumberbatch and his snazzy voice included), the story is messy and lacks urgency, and the whole thing feels a little bit made up (which it’s not, so that’s very bad). Like Jobs, there’s no reason this movie should be this not-amazing. Upside: Daniel Bruhl gives his second great performance of the year (after Rush).