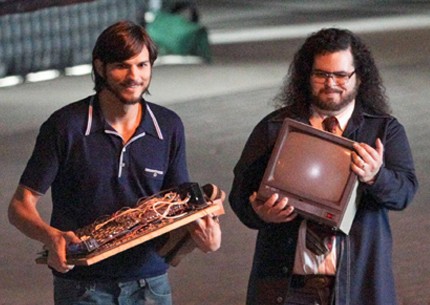 jObs, a lack of genius

Especially knowing that there’s an alternate universe Sorkin-penned version of this film somewhere, it’s next to impossible to watch Jobs without The Social Network looming large in your mind’s eye. Both are character portraits of an awkward genius-type who changed the cultural landscape through computers, earning the love and hatred of millions of people along the way. Jobs dips into The Social Network’s colour palette and even tries to replicate the melancholy of Reznor & Ross’ brilliant score (missing the point completely when it grandly attempts to instruct feeling) but aside from such ill-advised mimicry, the two films have nothing in common. From the uninteresting direction to the forced and over-dramatic script to the caliber of the acting, Jobs just isn’t a good movie.

Much of the problem with the film can be summed up in the fact that Ashton Kutcher- especially when outfitted with the iconic glasses and turtleneck- very closely resembles Steve Jobs as we remember him. He’s clearly worked very hard on mastering the skulk and the furrow and the wild gesticulations. But beneath the herculean effort and the superficial achievements, Ashton Kutcher remains inescapably, iconically Kutcherian. Jobs is full of epically scored moments and grand speeches (the famous “Crazy Ones” is used to pretty good effect, being awesome in that it wasn’t written by screenwriter Matt Whiteley) but it is, when it comes down to it, just Ashton Kutcher in glasses.

The film never makes any interesting arguments, reaches any interesting conclusions or even takes a point of view on its controversial subject (I suppose it comes down in vague favour of the man but that’s about it). None of the important relationships in Jobs’ life are explored with any sort of depth- the closest being a best friend figure in the form of Lukas Haas who is swindled out of his founding shares (It’s a wholly original angle…. Oh wait). Steve Wozniak, by far the film and the real story’s most compelling character, is more of a facilitator and an under-written victim of Jobs’ narcissism than anything else, despite Josh Gad’s charming and heartfelt performance (he pulls out acting chops in the third act that I definitely didn’t know he had). We never even see the co-founders meet or establish the complicated power dynamic that could have made an interesting movie (Let’s just make a movie about Woz; his arc even in this terrible movie is fairly compelling); Kutcher just yells “Woz!” really loudly a couple of times and the real genius appears, like Beetlejuice.

Which brings me to the damning flaw that kills the film: the issue of genius. In The Social Network, it takes Sorkin and Jesse Eisenberg approximately 34 seconds to completely convince the audience that Mark Zuckerberg has a once-in-a-generation intellect. From that moment on, even when he’s a complete jackass, the audience knows he’s special, he’s important, he’s somehow still worthy of our attention. Whiteley and Kutcher didn’t convince me for a second that Jobs was anything more than an interloping ego with lucky connections and excellent timing. And Mark Zuckerberg isn’t half the jackass Steve Jobs was. This is what the film tells us- a lazy hippie named Steve Jobs was friends with (but wasn’t particularly nice to) a game-changing computer genius (Steve Wozniak); he talked him into quitting his job and selling his invention; he made a bunch of phone calls; he played chicken with an important investor; the company struck it rich; he had a lot of attitude and casually mistreated and/or ignored everyone who had helped him get where he was (including abandoning a pregnant girlfriend somewhere along the way); he got fired; the company was poorly managed in the interim; he returned; he encountered a promising young designer whose ideas would revitalize the company; he introduced the iPod (“co-designed” with the young designer, who totally designed the whole thing). Now, if Jobs was a dark movie about how American culture creates Gods of bad men with a talent for spin and dangerous ambition, then all that would be okay (if it were better written and well acted). But the tone of Jobs– from the grandiose music to the concluding monologue- suggests a hero’s tale. I usually like hero’s tales, and I would have accepted that simplistic angle, jackass behaviour and all, if I’d believed even for one second, that the Steve Jobs of Jobs was the genius he’s supposed to be.