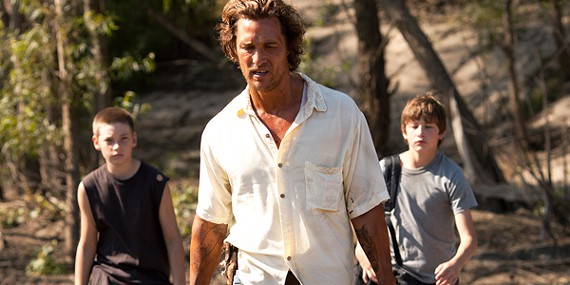 He did it again! After receiving recognition for his early work Shotgun Stories (2007) and Take Shelter (2011)- both featuring Michael Shannon- the Arkansas native writer/director Jeff Nichols delights admirers and critics at home and overseas with another crafty feature Mud. The coming-of-age indie premiered at Cannes in 2012 where it received a Palme d’Or nomination. Later it was screened at the Sundance Film Festival where it earned the emerging filmmaker even greater respect in the film circles where some speculated that “he is ready to make the leap to mainstream director.”

The humble indie auteur turns once again to realism as he explores the melancholy lives of small-town blue-collar folk. He takes his audience on an emotional roller-coaster journey onto the shores of Southeast Arkansas where two nervy teenage boys Ellis (Tye Sheridan) and Neckbone (Jacob Lofland), seeking adventures in the woods of a desolated island, discover an abandoned boat where a mysterious man dwells.

The film unfolds organically with the slow pacing that’s come to characterize Nichols’ work. As the story yields to breathtaking cinematography and a spot-on mouthwatering product placement of Beanee Weenees, the enigmatic stranger who calls himself Mud (Matthew McConaughey) turns out the be an outlaw, chased by police and a fierce family looking to avenge the murder of their son who was killed by Mud to protect the love of his life Juniper (Reese Witherspoon). Sympathetic to his justified sins, Ellis and Neckbone- as much intrigued as skeptical towards the complex persona of Mud- form a pact to help Mud rebuild the abandoned boat for his escape in exchange for the pistol he owns.

Here the admirable cinematography of Adam Stone (Nichols’ long-time collaborator) greatly enriches the intensity of the film and its characters, keeping the viewer on the edge of their seat. He alternates between stylized panoramic wide shots and closely captured images of nature’s creations, depicting as much of the serene beauty of the shore land as the brooding dangers of the eerie woods and deep waters.

Yet, despite its suspenseful premise, at its core Mud carries the quality of a heartwarming domestic drama anchored in the deepest, darkest points of humanity; dealing with universal emotions of love, revenge, and betrayal. The curiosity and patience of the camera closely exploring the characters’ facial expressions and body language (as if trying to reach their deep secrets) contribute evermore to the intimacy of the picture.

Staying true to his own craft of storytelling, Nichols, once again, strays away from the established conventions. Confident in his character development, he leaves the storytelling to them. There are neither true heroes nor are there soulless antagonists. All actions are justified by plausible cause-and- effect connection and no character is at the mercy of nature, law or life itself. And in its resolution, the film offers as much closure as ambiguity, without being forceful. Instead it allows the captivatingly intricate friendships, relationships and personalities to grow and develop in the viewer’s thoughts.

Despite its abrupt cuts transitioning and paralleling the sequence of the shots, the film retains its slow pace all the way through its climax. Nichols’ attempt to recreate the atmosphere of a small town in Southeast Arkansas with all its authenticity (whether through detailed imagery or overwritten expositional dialogue spoken in native dialect) is remarkable. However, the redundancy of both elements expands the screen time in the first and second act beyond its tolerable point, and thereafter deprives the climax of the time it needs to flourish. As a result, the succession of events appears forced, sacrificing the momentum needed for the third act to reach believability. Nevertheless, the feelings and the relationships remain real to the very end and this is exactly the charisma of Mud.