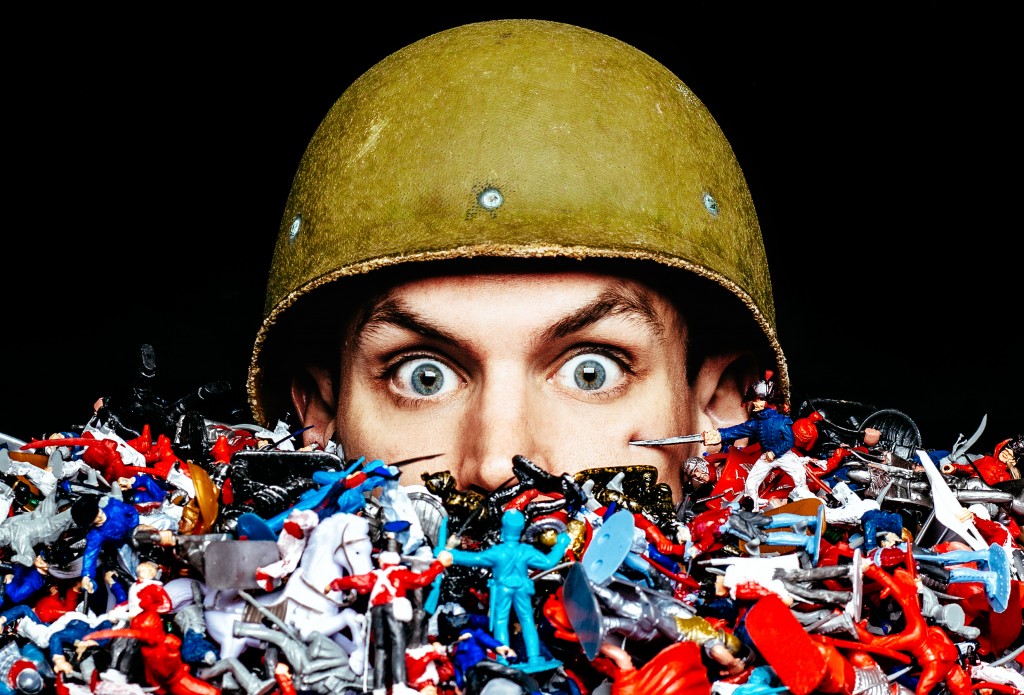 Great Battles in History (A+)
Mark Shyzer is the breakout star of the Fringe so far, at least in my estimation. Only Human is a big part of that (which I’ll talk about in a minute) but it’s his solo show that’s the most remarkable achievement. Superficially, Great Battles in History is a meta comedy act with a charmingly flustered oddball narrator, the occasional ukulele serenade, and some funny jokes about the history of war. That surface level is where most well-executed and likeable Fringe solo shows operate- funny, charming, clever- and Great Battles in History could easily pass as another strong show within that crowd. But it doesn’t. Instead, Shyzer builds a larger story of loss around his witty failed-musical narrative and turns a charming show into a poignant one. It’s at once one of the funniest shows of the festival (second only to Only Human) and one of the most moving.

Tarrare: A Story of Hunger (B-)
One of the Fringe’s most ambitious shows, Tarrare is historical fiction (though the language is distractingly anachronistic) with a promising cast (headlined by My Theatre Award nominee John Fray) and a dramatic (though severely flawed) script by Liam Volke (another nominee in last year’s awards for his superb performance in Bent). Designer Cat Haywood takes the French Revolution setting seriously in both good ways (the costumes are great) and bad (the set is over-complicated enough that the actors spend more time setting up the next scene than actually playing it) but the performances are all more stylized and practiced than dramatically compelling. With some fine-tuning, Tarrare has the potential to be far more compelling than it currently is.

2-man no-show: frozens (D)
Improv can be a very difficult form to review, especially when the artists are using a performance as a workshop to develop their new show rather than presenting a thought-out showcase. But, even if the show presents reviewing challenges, the performers and their approach to the show do not. It’s as though this pair are using audience suggestions as an excuse to end a scene that’s not working rather than, um, improvising. Over the course of an hour, I saw very few stories worth telling and even fewer jokes worth laughing at, despite hearing at least a few promising but ignored audience suggestions. The idea of giving the audience things to throw at the stage to force change in the scene is awesome, but it’s not used to showcase adaptability, it’s just used to end the misery.

Only Human (A)
I rarely include sketch shows in my Fringe schedule because, unless I’ve seen the troupe before, it’s next to impossible to know what I’m getting myself into based on the vague program synopsis. Enter Only Human, the only show that scored low on my trusty program annotation system but still made it onto my schedule (thanks to limited options in the TPM area). I’m now determined to never miss another Highbräu performance. Every single sketch in the show is impeccably timed and cleverly conceived, from short bits with only a couple lines (“ribbit”) to longer mini-plays (bank robbery romance!), to ukulele duets (witty, dark, and hilarious) and elaborate patter monologues (Mary Lougheed’s spelling test solo scene is just so great). The standout performers are the incredibly versatile Rakhee Morzaria (her diatribe about dieting secrets is sheer brilliance) and the incomparable Mark Shyzer who is in almost every sketch, including my personal favourite involving a glorious Alfred Hitchcock impression (did you know that the artichoke is the only vegetable capable of malice? Because it has a heart, you see). Retired Olympian Annamay Pierse isn’t up to the standard of her fellow performers yet but Highbräu in general delivers the most consistent hour of sketch comedy I’ve seen in quite some time.

Never Swim Alone (A-)
Mounting a Daniel MacIvor script at Fringe almost seems a little unfair. In one corner there are a hundred struggling young playwrights cobbling together what they can between waitressing and Starbucks shifts, entering the Fringe because no one will produce their script as part of the regular season; in this corner is arguably Canada’s most popular English-language playwright. This may be one of MacIvor’s most difficult texts to execute, but the company is still working with reliable, established material- a huge advantage when most productions are mired far more by cheesy dialogue and tired themes than by mediocre execution. Never Swim Alone began the Fringe process twenty steps ahead of most of its competitors on script selection alone. Perhaps because the textual foundation is so sturdy, director Brandon Nicoletti has been able to build a production so tightly executed and precise that I noticed exactly one tiny flaw of timing in the entire 42 minutes. Sean Jacklin and Michael Ruderman are impeccable as two sides of the same alpha male coin, locked in eternal competition and destined to tear each other down until neither can stand. It’s a great script (definitely one of MacIvor’s most inventive) but, thanks mostly to Jacklin and Ruderman, Nicoletti’s production is so much more than a great script.

Group Therapy (D-)
I sincerely enjoyed myself at this production. Trouble was, I was enjoying myself in the worst way possible- I had the funeral giggles; the must-not-laugh-so-you-laugh-more giggles. There’s the cast- bright eyed, sincere and not the worst vocalists I’ve heard all festival (though definitely not the best)- singing their little hearts out about how group therapy has made them realize the meaning of friendship, and I cannot keep a straight face. The music is so sporadic that it always comes as a strange shock when someone bursts into song. The music and lyrics are so over-dramatic and tired that they inspire more eyerolls than teardrops. The premise is so ridiculous that it’s literally a more ridiculous version of the plot from Matthew Perry’s canceled sitcom Go On, but not meant to be a comedy. Or, I suppose it’s supposed to have Some comedic elements, but you’re definitely not supposed to laugh through the entire thing. And you’re Definitely not supposed to laugh when the non-dancer cast starts in on faux-ballet during a sappy song from their therapist. Civil war re-enactments, erectile dysfunction, condoned gambling addiction, a very offensive monologue about how much Millenials suck- this was pretty much the worst show ever, but the cast has a lot of heart (some of them even have a bit of charm) and I did, sincerely, enjoy myself, just for the wrong reasons.