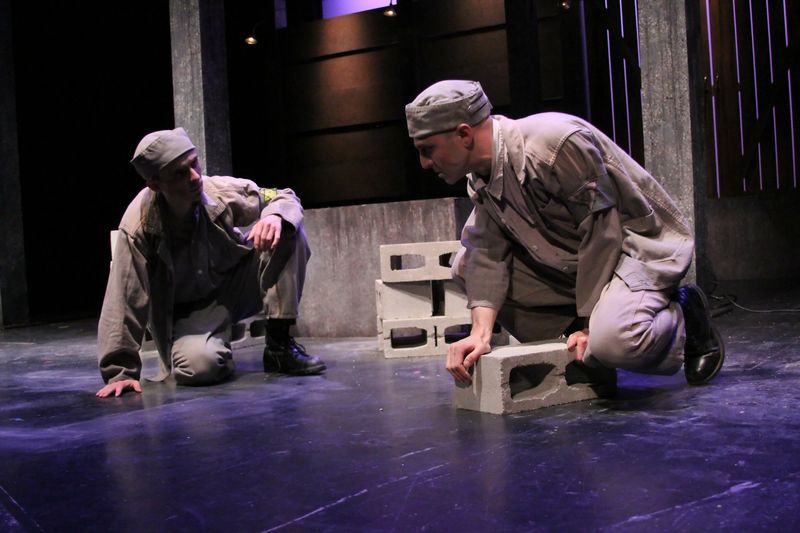 The first thing you need to know about my relationship with Martin Sherman’s astounding play Bent is that it was one of the last things I saw performed before I created My Theatre (then a standalone website, now a branch of this one). In June 2009 I saw a truly brilliant production at Ryerson’s Abrams Studio Theatre that I credit as being the show that made me want to write about theatre. I couldn’t rest until I’d told as many people as I could about that production, and I wanted the actors to know how phenomenal a job they had done with such a phenomenally difficult task. Specifically, the actor who played Horst delivered a performance so mesmerizing that the idea of him leaving the theatre with only the expected praises of his family and friends actually saddened me. I’ve gotten lots of hatemail over the years for being too hard on actors, but the reason I am is that I want performers (and directors and writers and everyone else in the theatre) who deliver something truly special to know that, when I say that, I’m not just saying it to be nice; I’m saying it because it’s true (just like I am when I say something’s not as good). That 2009 production has stuck in my mind ever since, not only as the play that prompted our most prominent MyEntWorld branch and my introduction to an actor who has become a staple of our most glowing reviews (the Horst in question was future My Theatre Award winner Jesse Nerenberg), but as the best student production I have ever seen and a truly great piece of theatre on a far grander scale.

So, with all that in mind, I was excited and apprehensive and everything in between when I saw that the highly hit-or-miss Hart House Theatre had slated Bent as their final production of the 2012/13 season. It’s a remarkable piece of theatrical writing- a complicated and heartwrenching mix of comedy, romance, and historical drama- and obviously one that’s close to my heart. Hart House has been batting about .500 over the last couple seasons (a great average in baseball, a mediocre one for a theatre company): Cabaret? Fantastic! Night of the Iguana? Blegh. Rosencrantz & Guildenstern? Blah. Rachel Corrie? YES! Romeo & Juliet? Pretty good. This could have gone either way. Luckily, Hart House managed to assemble one of their best casts all year and Bent is every bit the evocative and beautiful piece it should be.

Carter West does a fine job of directing the relatively straightforward action, aided greatly by Dominic Manca’s strong lighting design and thoughtful set that transitions smoothly from a slightly-too-big apartment into a club into its true bare-bones identity as German prison camp Dachau. There are some baffling music choices that flirt with pulling the audience out of the story but the cast is good enough to reliably pull us back in.

Jad Farris valiantly approaches success in the uniquely demanding role of Horst. The character’s soft heart is so thoroughly worn-over with scar tissue that reconciling his pendulum-like behaviour proves a monumental task for the actor and Farris succeeds more in Horst’s stoic beginning and bitter snaps than he does in the trickily written pieces of sentimentality. Jordan Gray, in contrast, seems most at home in Rudy’s most sentimental moments. That easily overshadowed role is key to establishing the main character of Max, and Gray brings all the warmth and innocence to Rudy that the audience needs to propel the action once it moves to Dachau. Their back and forth in the wonderfully funny first act sets up a rich history between Max and Rudy but it’s the tenderness that Gray brings to their one real moment of intimacy that sells the emotional stakes of the relationship.

Nathaniel Bacon is perfectly cast as clueless trouble-starter Wolf and Thomas Gough is intensely dangerous as the Nazi Captain, but it’s Liam Volke’s compelling turn as Max that lifts the production to its heights. Volke is fantastically funny in his first scene- wry, clever, and unapologetic-  painting a picture of Max so vivid that he stays that joyful ideal in the audience’s memory throughout the rest of the piece. From the moment he and Rudy leave their home, Volke starts chipping away at the charming and wily Max he made us fall for, tearing away every bit of joy until the memory of him in that first scene is almost unbearable to hold in your head (but still impossible to shake). The small moments of happiness Horst brings to Max don’t glow as strongly as they might in other productions (the chemistry between Farris and Volke isn’t as indelible as I wanted it to be), but in the context of Volke’s overarching performance, that proved less important than I was expecting. His Max is so vibrant in the beginning and his relationship with Gray’s Rudy so lovely that what he develops with Farris’ Horst in Dachau reads less as a life-changing love and more as a melancholy hint at happiness within an arc of loss-of-self that’s far larger and more tragic than a mere love story. What Horst gives Max is a reminder of who he is underneath the dark layers that self-preservation has put on. My previous experience with Bent had made Horst the standout character, but the larger arc belongs to Max so what makes Hart House’s production stand out is Volke’s winning turn.

Beyond its groundbreaking portrayal of the treatment of homosexuals in Nazi Germany, beyond its most evocative moments, and beyond its complexly drawn characters, what I think makes Bent most remarkable is its holistic sense of genre. Sherman wrote a whole spectrum of emotion and experience into a story most writers would have immediately boxed into “drama”. Bent is, in a lot of ways, a romance, and in most daring fashion, it’s also wildly funny. Like the characters within it, Bent is a lot more than its own tragedy, and in finding the perfect Max, Hart House is able to capture all that.