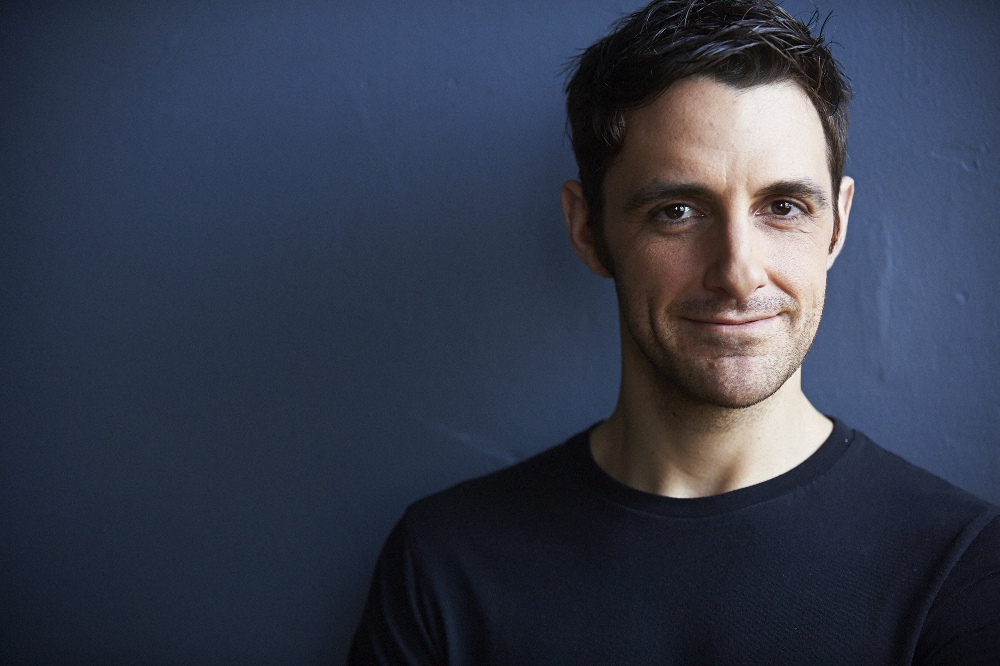 In Brandon Crone’s Turtleneck, John Fray played Roy- a terrifying, violent and controlling misogynist. In real life, it turns out he’s a totally charming and completely irreprehensible human being. In praise of his startling transformation, we’ve nominated him for Best Supporting Actor in a Regional Production.

Read on for proof of his not-Roy-ness (also for details about the production, working with the playwright, and an embarrassing curtain call story not to be missed).

Can you remember the first theatre production you ever saw?
I believe the first piece of theatre I ever saw was a community production of Oklahoma.  I couldn’t have been more than 7 years old and I don’t remember a lot about the production, but I do remember having this feeling as though I were looking through a window into an alternate reality.  I had become a voyeur of another world.  That excited me a great deal and I believe it’s what initially sparked my interest in theatre.  The idea that I can potentially recreate that feeling for others is one of the things that deeply satisfies me about performing in the theatre.

What’s your favourite role you’ve ever played?
Perhaps my favourite character to play was Emil from David Mamet’s The Duck Variations.  There was something in this character’s innocence and naivety that I could deeply connect to.  Though the character is traditionally played by an older man, I found Emil easily relatable and, in many ways, almost childlike.  I was drawn to his anguish over the plight of our feathered friends and I was empathetic to his grief.  I like characters whose hearts are almost too big for their own good.

Do you have a dream part you’d like to play one day?
Perhaps Johnny from Frankie and Johnny. What can I say?  I like characters whose hearts are too big for their own good.

How did you get involved with Safeword?
Brandon Crone (Turtleneck’s playwright and director) and Alex Dault (Turtleneck’s producer) happened to see a production of Boeing Boeing that I was in the previous April.  Brandon had been working on Turtleneck for some time and he thought that I might work for the role of Roy.  He sent me the script and I was immediately in love, intrigued and disturbed all at once.  I figure I couldn’t ask for a better reaction to a script than that, so I said “let’s do this.”

Had you ever worked on a new play before? How does the experience differ from performing an established text?
I have worked on a couple of new plays before this one.  One of the things that I like about doing so is that it sometimes provides the opportunity to help develop the script.  In a first production of a play, the writer is often closely involved.  If, together, we stumble upon some tricky spots in the text that simply aren’t working, we can explore those spots together and hopefully arrive at a solution.  I also love the idea of creating something that there is no precedence for.  A story that has never been told.  A role that has never been played.

How do you specifically prepare for such an aggressive role like Roy? How did his intensity compare to characters you’ve played in the past?
I’m a very unaggressive person, and yet I often seem to get cast in aggressive roles.  One of the things I try to keep in mind while playing characters like Roy is that most anger and aggression comes from a place of fear.  So I think about what my character is afraid of.  How has he been hurt?  What does he have to lose?  How high are the stakes?  What will happen to my character if I don’t go after my goal as aggressively as possible?  I also need to believe that my character is justified in his actions.  That he is in the right and everyone else is wrong.

What was the reaction of your family and friends to such a startling character in a boundary-pushing show?
“Repulsion and fear”.  That was the lovely response from one friend.  Turtleneck was designed to be performed in an intimate space.  It breaks down the standard audience fourth wall by putting them right in the middle of the action.  For example, when Roy interrupts the date between Vicki and Louis, the closeness of the atmosphere not only forces the characters to deal with his aggression and violence, it also forces the audience to deal with it as well.  It’s like the audience is a guest in someone’s living room, witnessing a domestic dispute.  Ultimately, I think it’s Roy’s manipulative behavior and sense of entitlement and ownership over Vicki that evoke the strongest reaction to his character.  Roy is a man who will treat people like objects in order to achieve his own purpose.  This certainly isn’t the whole picture of his character, but it is a large part of who he is and it certainly left some audience members feeling disturbed.

What is your favourite rehearsal memory?  Production memory?
I would not call this my favourite memory, but I do look back and laugh.  In fact, I can’t for the life of me figure why I am sharing such an embarrassing moment with readers, but here goes.  At the end of the play, Roy is involved in a sexual sequence that runs for a couple of minutes and leaves him half undressed.  After a brief blackout, lights are brought back up and the actors immediately go into curtain call.  Well, sometimes my body would respond to the sexual sequence in what I would call a perfectly natural way.  As much as I wish it didn’t, it was beyond my control.  With no more than a split second of darkness to recover from the scene, I would sometimes be left standing, front and centre, bearing my full potential to an already disturbed audience.  Oh, what we do for the love of the craft.

Brandon Crone, who wrote and directed Turtleneck, is nominated this year for his other new play- Donors. What would you say is the most important conversation you two had in developing your portrayal of Roy?
“Go for it” was Brandon’s advice to me on this one.  Brandon helped me through the psychology of the character quite a bit, but it was really his encouragement to try anything that was most valuable to me.  He set no boundaries and any time I came to him with an idea for the character, he would always be open to trying it.  He really let me take the reins on this one and I’m so grateful that he trusted and believed in me enough to give me such freedom.  It takes a strong and secure writer to surrender his work into the hands of the actor.

What’s it like having the playwright direct you?
It was wonderful working with Brandon.  One of the things I appreciated about his process is that he put more of his concern into the overall experience of the audience member, rather than the specifics of each actor’s performance.  He gave us a lot of freedom to interpret the text and even adapt it in places as we saw fit.  I must say, I did pepper the text with certain “Roy-isms” that he let me run with.  I don’t know whether they’ll be left in for future productions of the play, but I certainly appreciated that freedom for my interpretation of Roy.

Did you have a favourite moment in the production?
I actually enjoyed playing Roy’s lighter side.  There is one joke in particular that Roy tells about the Lone Ranger and his “posse” which always cracked me up.  Probably too crude to publish here.  I think these moments exposed some of Roy’s humanity and added to his charm.  They made him more relatable.  And it’s always scary when a character committing despicable acts starts to become relatable, even likeable.

Which directors and actors have had a major influence on you throughout your career?
There are a few key people that have influenced me strongly throughout my career.  Perhaps one of the most influential was Brian Rintoul, a director and former professor at the University of Windsor.  He taught me to PAY ATTENTION TO THE TEXT.  Everything an actor does must be supported by the text.  As a young acting student, I viewed the text as simply a very strong suggestion to the actor, but as long as I was inspired I thought I could get away with anything.  That, of course, does not serve the story and he was the first teach me that an actor is a servant to the text.  The actor doesn’t tell the story.  The story is told through the actor.

One of the most influential actors in my life has been my good friend Josh Browne.  Josh is one of the people who I can go to for advice and he’ll be completely honest with me one hundred percent of the time.  It’s important to have someone in your life who you can trust when you need critical feedback.  Not only is Josh a wonderful actor himself, but he has a true talent for dissecting a script and articulating the movement of a scene from moment to moment.  Coincidentally, Josh was nominated for this same award last year.

Do you have any favourite people to work with?
There are a number of talented actors who I have had the pleasure of working with, but one of the first to jump into my head is Tim Walker.  I worked with Tim in a production of Boeing Boeing and I was blown away by how intensely present he is.  Every moment that he’s working he remains responsive and emotionally available.  He’s with you all the way.  He also has an incredible sense of freedom and spontaneity in his work.  Although I knew exactly what was coming every night, he would still always manage to surprise me.  Tim made my job very easy.  I never had to try to “act”.  I was simply having an honest reaction to everything he was doing.

What are you doing now/ what’s your next project?
The next project I’ll be working on is a pilot for a series about motorcycle gangs.  Once again, I have been cast as a somewhat disreputable character.  I guess I just have one of those faces.

Do you have anything you’d like to add?
There’s a few things I’d like to subtract… I feel as though I’ve said too much.