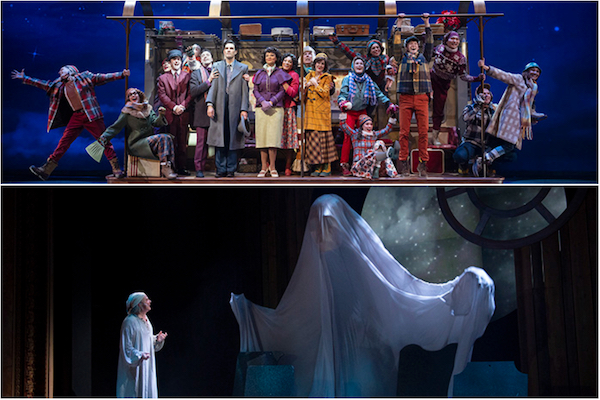 The expansion of the Shaw Festival season to include a duo of holiday shows every December has proven to be a truly winning innovation. The mini-season in the winter forms a welcome bridge between the festival’s regularly scheduled April-October season and makes the company feel like a full year player rather than a summer getaway. It gives audiences a chance to experience beautiful Niagara-on-the-Lake at Christmas time (weather dependent, it’s quite the sight) and gives critics a much-needed break from city offerings.

Part of the charm, for better and for worse, is the sweet simplicity of the holiday offerings. In the city, especially post-pandemic, a lot of the work is dark, ambitious, and difficult. It’s (sometimes) rewarding to experience, but it’s often not a very good time. The Shaw holiday season is a very good time. The best time. It inspires the kind of uncomplicated happiness that can only come with a big-hearted show delivered with the utmost theatrical competence.

The returning Christmas Carol is yet again staged with extraordinary practical effects and theatrical creativity in the Royal George Theatre. Canada’s greatest underrated leading man Graeme Somerville beautifully blends well-hidden sadness and vulnerability into the gruff selfishness that defines his Ebenezer Scrooge, contrasting brilliantly with the warmth and joy of the ensemble around him (any cold moment can be immediately cheered by the memory of Jason Cadieux bouncing in his giant fur coat, chanting “jingle jingle jingle”). Though the effects, especially Christmas Yet to Come, are wonderfully spooky, the tone of the show in general veers a bit too far in the direction of children’s theatre. Some jokes, like Scrooge’s use of Patty Jamieson as his desk, land with perfectly pitched dark humour and biting commentary that highlight the story’s sad evergreen relevance while still being goofy visuals the kids will love. But others, like Scrooge’s “money money money” snoring refrain, are cartoonish and risk pulling adults out of the trance otherwise so beautifully cast by the production. I’d love to see this show evolve slightly upwards and trust its young audiences to come along with it but, even in this slightly over-played iteration, in its best moments, most of its moments, Shaw’s A Christmas Carol hits the right balance of comforting simplicity, thoughtful storytelling depth, and energizing theatrical surprise to make for the perfect holiday production.

White Christmas is perhaps a more extreme example of the central bargain of Shaw’s holiday season. Adapted from the film of the same name that’s not exactly a masterpiece of storytelling in the first place, the stage version of White Christmas is truly one of the stupidest musicals I’ve ever seen. The entire plot, if you can call it a plot, hinges on Alexis Gordon’s seemingly reasonable Betty wildly overreacting to small miscommunications and jumping to extremely dramatic illogical conclusions. Pretty much every female character behaves this way, reduced to a swirl of hysteria in order to create story conflict then immediately forgetting why she was so upset, but Betty gets the worst of it by far. It’s a shame because Gordon brings a lovely calm to the role, her natural grace easily filling the stage with the movie star quality the character inherited from Rosemary Clooney (she’s also stunning in Christine Lohre’s sublime costumes and a set of A+ wigs from the Shaw’s best department).

In fact, everyone is great in White Christmas, every last one of them. From tenor dreamboat Jeff Irving who easily out-sings Bing Crosby (that’s right, grandma; fight me) to his wife Kristi Frank who makes a very funny meal out of the tiny role of Rhoda to newcomer Catherine Dubois who has the impossible task of playing an annoying kid of indeterminate age but who then busts out what may be the best vocal in the whole show. Though he confusingly looks a bit like he could be Irving’s kid brother, Kevin McLachlan is a delightful choice for co-lead Phil Davis, adding a little extra smirk to the dance-heavy role to smartly differentiate himself from all-time-great Danny Kaye. But it’s Mary Antonini who really steals the show as spit-fire Judy. A dynamite dancer who leads the excellent ensemble through Allison Plamondon’s extremely fun choreography with seemingly endless energy, Antonini sparkles so brightly you almost can’t even see the plot holes.

So this becomes the question- how much room is there in the theatrical landscape for a musical like this? It’s as well executed as you could possibly want; and the music’s obviously pretty good, at least if we’re grading on an oldschool catchiness rubric and not worrying so much about more contemporary ideas like character voice and poetic meaning. But it’s bad, it’s just so bad.

Honestly, I’m kind of ok with that. At least right here right now when joy is at a premium and comfort is a commodity that’s hard to come by. I trust the Shaw Festival to make more than this, to challenge themselves and us with their main season programming and put out ambitious, difficult work like Gem of the Ocean and Everybody. It’s the balance that’s important and, at least right now in Ontario, there’s a lot of important theatre being made, so I’m up for the occasional something stupid. Despite the book’s flaws, the company of White Christmas never treats their material as stupid. They pour in everything they’ve got at every performance and this company’s got a lot to give.

Catch A Christmas Carol and White Christmas at the Shaw Festival through December 23rd. Because joy is enough.