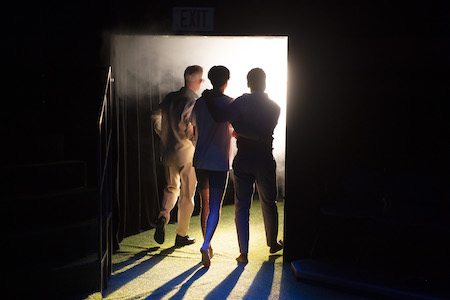 Everybody is the dream. If you ever hear someone question the goal of modernizing and diversifying the country’s biggest and most entrenched theatres, tell that person about Everybody. This production is why that forever and always struggle is important. Beyond just issues of fairness and the importance of representation, it’s important because real success means better art. This production would not have been possible at the Shaw Festival ten years ago. It wouldn’t have been possible much of anywhere.

The racial and age diversity onstage is a testament to the Shaw’s embrace of new talent from communities that have been historically underrepresented at the festival while also maintaining room for beloved figures of the festival. The hook of Everybody is an onstage lottery at every performance that determines which roles the majority of the cast will play. Each performer represents an aspect of life- friendship, kinship, stuff- but those things look and behave differently every show. So, to, is Everybody, the leading character whose journey we follow, someone new every time. Everybody can be anybody, and that’s just not possible to portray onstage unless you’ve done the years-long work to build up a company of experienced, multifaceted actors who look like everybody.

At the performance I attended, Everybody was Travis Seetoo, a performer who’s been with the Shaw for eight seasons but is unmissable this year with a stunning, vulnerable performance here if you’re lucky enough to see him chosen for the lead (he’s also the best thing about Too True to be Good). I say unmissable though, of course, it’s very possible to miss him. The other ensemble members in the Everybody lottery made impacts of various sizes in the smaller roles on the day I attended (Kiera Sangster is a particular standout, and Patrick Galligan is great as always), as I’m sure Seetoo does when the lottery goes another way. But not all the performers are as captivating and it’s a bit of a luck of the draw whose journey you’re following. The cast members whose roles do not change, however, are a more reliable gamble. Come just for Sharry Flett’s glorious portrayal of Death or for Deborah Hay’s virtuosic array of performances in a three-role track that takes her from silly to wild to tender.

Beautifully, one of the few characters who is always the same is Love. Played with moving tenderness by Andrew Broderick at every performance, Love loves every Everybody just the same and the rotation of other cast members means that their romance looks different every time- straight, queer, interracial or not; love is love is love in every iteration.

At only 1 hour 40 minutes with no intermission, Everybody is a fast-paced, quick hit of a play full of belly laughs and gut punches. It’s a marvel that’s not to be missed and a miracle that points to the future.