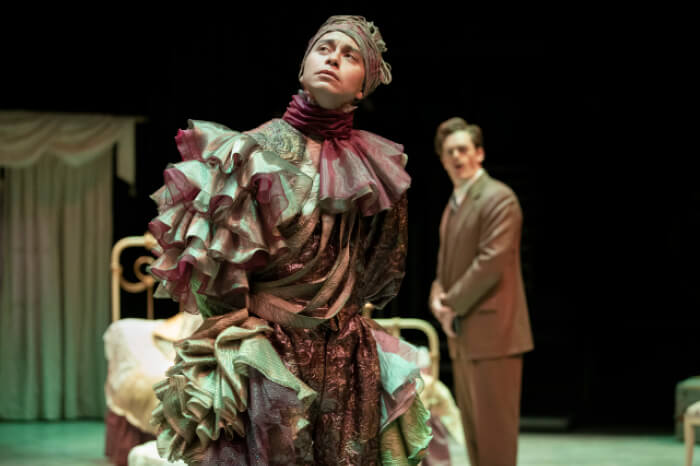 Shaw Festival Review: Too True to be Good

Nearly three full hours, consisting of very little plot yet somehow lots of plot contrivance and noted mainly for its extended bursts of tiresome moralizing, Too True to be Good is quintessentially Shavian in a way I find hard to love. It’s so typical that there’s almost a strange comfort in its inclusion in this, the first full festival season since the beginning of the Covid-19 pandemic. Here we all are, mostly unmasked and un-distanced, in Niagara-on-the-Lake watching some lower tier namesake nonsense like nothing ever happened. A few pieces of dated material like this per year is part of the Shaw Festival’s deal with the artistic devil and a lot of its like went by the wayside during the pandemic when so little was happening that there was no room for obligatory filler. But we’re back, baby! So that means sometimes you gotta sit with the old folks while they watch some boring stuff.

Programming-wise, it’s easy to see how the play’s one fun gimmick (Travis Seetoo playing a microbe, snidely commenting on the behaviour of the characters) would have earned it the “oldschool Shaw play” spot on this particular season roster but, really, the infectious disease angle fades so quickly from the action that to focus on it feels ultimately misleading. Seetoo is one of my breakout stars of the season so far (more on this when we get to Everybody) and the microbe is mighty fun (Shaw is rarely more fun than when he’s sassy) so I naturally longed for a full version of whatever play this character was briefly stolen from to appear so sparsely in this one.

The rest of the cast, mostly regulars, is in fine form, their trademark British accent work as superb as ever. And the wig department is firing on all cylinders. The play itself’s pretty lame but, hey, that’s the mandate for ya! What fun to finally be over all my “I’m so grateful just to be here!” tears and get back to my old chorus of repeat complaints. I love the Shaw Festival and the Too True to be Goods are part of the deal. They’re tiresome, at least to me who finds GBS himself often very tiresome, but they’re the solid support beams that let us have that modern open floor plan the company’s been ever so slowly building slightly more adventurous director after slightly more adventurous director.

You cannot have the Shaw Festival without Shaw, for many reasons beyond the obvious. Between the political ethos and prize-winning reputation of its eponymous playwright lies the mainstream high-art/society approval necessary for an artistic institution of this size to survive, living perhaps contradictorily in harmony with an unapologetic sense of rebellion and confident oppositional voice. It’s a weird place, this capitalist not-for-profit legacy operation making corseted but explicitly political theatre for wealthy weekenders in wine country.

And thus Too True to be Good is a little too everything to be anything. It’s got very high-minded ideas and very low-brow comedy. It’s got too much to say and very little to do. At a certain point, the grand speechifying all starts to sound like a hum. I’m looking at lighting designer Nick Andison’s gorgeous blackbox sunlight and thinking yet again that Graeme Somerville is definitely in the running for Canada’s greatest living actor while Shaw’s pretty but very repetitive points just kind of wash past me.

I’d be very surprised to hear that this is anyone’s favourite play and there isn’t much in Sanjay Talwar’s directorial interpretation that brings anything particularly new to the table. But you gotta do Shaw at Shaw and that means not just the same big three over and over again. While also reaching out and exploring what exists beyond and beside and because of him, the company has a duty to show off the full Shavian canon for all its ugliness and boringness beside its well-lauded glories. And so they are. Even if sometimes all that stands out about it is some really good actors in really great wigs.