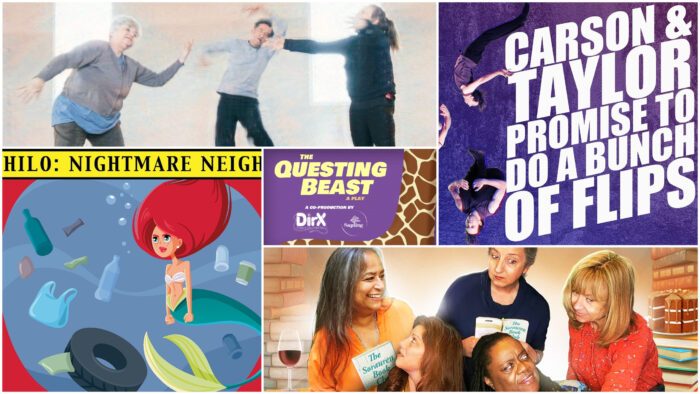 Sleeping, Tucked in the lonely Purple (B+)

Conceived and choreographed by Yvonne Ng, this tender three-hander is a lovely inquiry into what we don’t hear when we stop listening. The choreography is simple but evocative, performed beautifully by a trio whose dance experience runs a notable gamut (Harold Tausch is making his live dance performance debut; Susan Cuthbert is a Canadian musical theatre legend; Susan Applewhaite falls somewhere in the middle). Billed as expressing “the lived experiences of three senior-citizen artists”, the piece’s power comes from its utter sincerity as three older artists are given the opportunity to perform, behave, and express in an arena usually reserved for the young. The moving earnestness requires that cynicism be checked completely at the door, along with technical nitpicking. This is not the most refined dance piece but its honesty and joy is undoubtedly moving.

The first show on the Fringe schedule, this sweet musical adventure for kids is the perfect way to ease back into the chaos to come. Music by Jake Schindler and lyrics by Brett McCaig help the four-person cast teach valuable lessons about mutual respect and taking responsibility through a story about a mischievous phantom who keeps pranking his magical neighbours without considering their feelings. Alisse Lee Goldenberg’s script is economical and fun, keeping the action both simple and swift for the 4-10 year-old target audience. At the opening performance, the cast isn’t quite as in sync as I imagine they will be at later performances, still adjusting their physicality and performance style to the space and the audience. The exception is Kenton Blythe whose joyfully silly phantom is an immediate showstopper with perfectly calibrated kids content energy (a lot but never too much) and the kind of real deal singing voice that I love to (and rarely) see deployed in theatre for young audiences. The Jay & Shilo team clearly have a real respect for their audience, never talking down to them or phoning it in, and that to me is the key to a great KidsFest show. I also love episodic storytelling so the fact that this is part of a series delights me (check out its companion piece Jay & Shilo: Prop Catastrophe, also playing at KidsFest).

Carson & Taylor Promise to do a Bunch of Flips (B)

The big trick of this two-handed sketch show is that it under-promises in order to over-deliver, on flips at least. The marketing really makes it seem like there are going to be no flips, but there are so many flips! Carson Pinch and Taylor Davis clearly worked pretty hard to actually pull off quite a few stunts despite being, as they tell us, old and untrained. There also may or may not be a few outsourced flips involved, in case you don’t like sketch comedy and genuinely just want to watch some acrobatics (I have questions about why you’re here if that’s the case, but they’ve got you covered either way). On account of Pinch and Davis being sketch comedians, not acrobats, I was expecting zero flips but I was expecting pretty solid sketch comedy. I got a lot more flips than anticipated but the sketch comedy was merely so-so. A few bits really work, particularly the recurring ones about a bad boss and distracted employees, but some of the longer scenes drag. I wonder if the focus and precision required to pull off the flips detracts a bit from the execution of the comedy, which is, despite the title, the actual point of the show. This is one of those Fringe pieces that will likely tighten up as the run progresses so take a chance on it if you’re a sketch fan, or if you really like flips because I promise there are actually a bunch of flips!

A talky dramedy about five women who meet monthly to drink wine, eat cake, and occasionally discuss a book at least some of them have not actually read, The Sorauren Book Club plays in drama-rich territory but doesn’t mine deep enough to find real rewards. Lisa Randall’s script relies too heavily on backstory exposition and not enough on actual plot, the characters making much of potential conflict that’s ultimately very easily resolved. We learn a lot about each character, Randall clearly took the time to build out who these women are, but she fails to give us any real window beyond what they tell us about themselves. Maria Syrgiannis’ sure-footed Charlene stands out in a very shaky cast whose opening performance was marked with lots of line flubs and missed cues. The concept here is promising but a stronger foundation of actual action would give the bookish arguing and diverse backstories something to stand on.

This Arthurian KidsFest adventure features one pretty spectacular beast very much worthy of questing. Refreshingly, the nearly life-size puppet represents a “beast” that actually exists, otherworldly though it may seem. There’s something special in that, the messaging to kids that the real world contains real wonders. Alas, that’s where the magic ends for this lightweight romp. At only 40 minutes, the limited action of Questing Beast drags as attention divides between too many barely differentiated characters who bring little to the main character’s story. The ultimate moral that sometimes the journey itself is the destination is a worthy one but an uninspiring script full of poop jokes and age-inappropriate metatheatrical references leaves a lot to be desired.