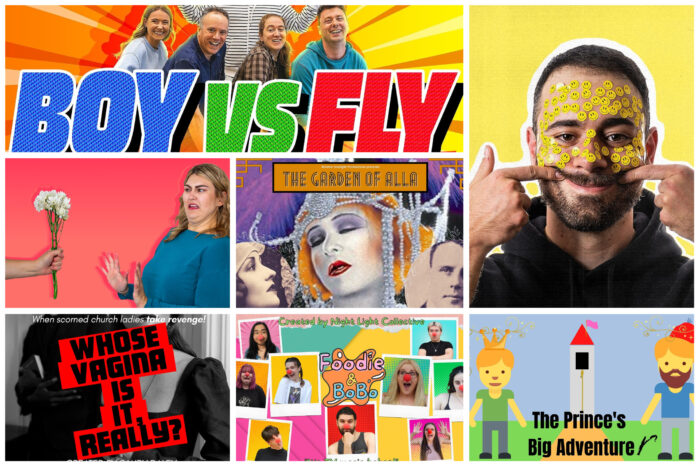 This clever piece presents itself at first like a pretty standard storytelling show wherein a comedian regales us with true tales of their less-than-stellar dating history. Caity Smyck is a compelling performer who connects with the audience instantly so I would have been more than happy with just that. But as the show develops, it becomes clear that Smyck isn’t so much playing themself as playing a composite character created from their own, their collaborators’, and many other people’s real stories. The first person narration feels like stand-up but is actually more of a frame device that weaves together a diverse portrait of modern dating. Smyck’s stories are played out with the help of co-writer Eve Beauchamp who embodies an entire ensemble’s worth of dreadful dates, bringing both incredible pathos and abject horror (along with chameleonic skill) to scenes that run the gamut from innocent incompatibility to gross-out shenanigans to dangerous patriarchal bullshit. This show for me struck the perfect balance of accessible fun, thoughtful storytelling, and genuine emotion delivered by two standout creator/performers.

Anesti Danelis: This Show Will Change Your Life (B+)

One of the more consistent comedy talents in town, Anesti Danelis’ honest and inventive musical standup routine is always a sure bet. This Show Will Change Your Life isn’t much of an innovation from his previous work and some songs are certainly more impactful than others (his opener is a banger, the proceedings drag a bit in the middle) but it’s hard to go wrong with Danelis’ well-honed lyrics and engaging stage presence.

The Prince’s Big Adventurer (B+)

The best of the musical KidsFest shows, this twist on the prince rescuing his princess from the tower puts equality and true bravery at the forefront to the tune of some great ditties courtesy of songwriter Tyler Check. The musical direction is a little shaky with none of the singers appearing to be in their most comfortable range and the inconsistency extends to the actor direction where there appears to be no consensus on something as simple as volume but Steven Elliott Jackson’s script is charming and the actors engaging. A more convincing romantic connection between the principal couple would add to the emotional stakes and make the final payoff stronger (it’s a kids show so I’m not expecting too much physical intimacy but a few longing looks and an arm graze or two couldn’t be too much to ask). Overall this is a fun, well-constructed, inclusive adventure that’s exactly the right direction for KidsFest.

The Garden of Alla (B)

The second script in a row from Fringe favourite Steven Elliott Jackson, this old Hollywood tale features a grand central performance by Rebecca Perry in the role of secretly queer ageing diva Alla (Perry reads as a bit too young for the part but she’s definitely landed in the right era). Alla’s lover (Neta J. Rose) and husband (Shawn Lall) make up the rest of the cast as they lounge and fret amid the trappings of Alla’s sanctuary of a Hollywood home (the collectively chosen lush set details and costumes are best of the fest). Though his dialogue is trademark quippy and his central character intriguingly complex, the actual story of Jackson’s play is a little thin with too much action happening off stage. This is a very weak Fringe for new plays so The Garden of Alla is definitely a standout though it lacks the “wow, someone pick this up immediately” impact of Jackson’s best past work.

Zohaib Khan’s comically obnoxious fly character is the best part of this cute but confusingly quirky KidsFest play about a kid who becomes obsessed with catching flies. The theme of living up to a parent’s legacy is intriguing subject matter but it gets lost in a strange thread about Dean Bean’s dad cooking “weird food”, a phrase rife with complicated feelings for anyone who grew up with cultural or health-related dietary restrictions or traditions but here just means dad puts jam in the lasagne.

This play about a gaggle of church ladies who get predictable, insufficient revenge on the creepy pastor who harasses them is well intentioned but brutally off-base. The performances and direction are very rough and missed cues and line drops abound but it’s the script that presents the biggest issues. Badly structured with an introductory monologue that doesn’t add anything but to spoil the plot, the play hops around then delivers key details through exposition when there’s no reason not to play the scene. The pastor character is over the line in his offences and should be reported rather than just publicly embarrassed and a strange amount of time is dedicated to an unprompted war between female characters. The drama here comes from all the wrong places, accidentally undermining the very good points I think they were trying to make.

I think what was happening here was that Foodie & Bobo, a pair of clowns, were representing the driving fears of a pair of polar opposite sisters as their individual priorities and approaches to life come into conflict? I think? In practice, this confusing and terribly paced comedy manifests mostly as two women (whom I know to be sisters only because the program blurb told me so) yelling horrible names at each other (the fat shaming is so brutal that even I was triggered and I am really very fine with being fat). The performances lack authenticity and all of the laughs come from either cruelty or catchphrases. I think maybe there’s a kernel of a good idea somewhere in the premise but the execution of this piece was hard to watch.