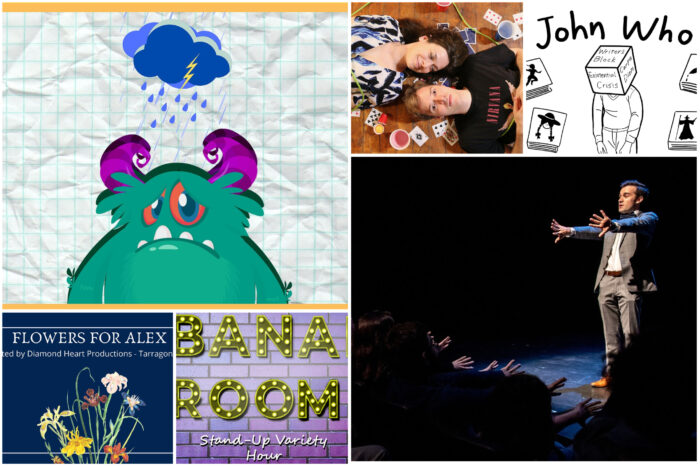 At the Table with Keith Brown (A)

I hate to be tricked but I love hyper-specific skills that can only be mastered with good old fashioned decades of practice. So magicians often present a bit of a problem for me. What works so well about Keith Brown’s show is that his act doesn’t rely on lying to his audience. He knows we know that the cards didn’t magically change colour, it was sleight of hand. And he trusts us to find that sleight of hand impressive and entertaining enough that we don’t have to believe it’s magic to believe it’s unbelievable. He is incredibly talented and has worked incredibly hard to master his craft, that right there is magic enough for me. Brown’s close-up work (here displayed theatrically with the help of two cameras and a screen, with a few audience members up front with him to keep him honest) elicits thrilled exclamations from the audience and the genuinely surprising twists of his well-narrated performance made me laugh out loud more than any of the many great comedians in the Fringe this year. Brown is affable and relatable in his manner, which makes his mesmerizing illusions all the more thrilling. My trust-issue-addled brain has a hard time enjoying most magic shows but every second of Keith Brown’s performance is pure joy.

This superb KidsFest show begins the way nearly every Fringe show does, with a land acknowledgement. At this relaxed, kid-friendly performance, the three-person cast set the tone for their interactive show by coming out and speaking directly with the audience. They had us say “Mississaugas”, “Anishnabeg”, and “Haudenosaunee” out loud with them then explained the dish with one spoon treaty in a clear and positive way, making the mandatory speech into an engaging learning experience. They also used these first ten minutes to explain the accessibility measures of the relaxed performance and set up the parameters of audience interaction so the kids (and everyone) would feel safe and could have fun. The business at the top of the show set the tone for what was to come- a really important lesson that never ever feels preachy, simplistic, or boring. Jessy Ardern, Ted Hambly, and Carmen Osahor are stellar kids performers whose vibrant energy never slips into condescending exaggeration. Once the story finally begins, they hold on to the fourth-wall-breaking narration and make room for the audience to affect the story through choices and interpretation (is it rainy or sunny? What do you think Alex is feeling right now?). Tackling one of the hardest topics in the world, The Big Sad is profoundly moving in its central message that it’s ok to feel your feelings and we’re all going to feel them differently. By anthropomorphizing sadness, this show makes the complexity and contradictions of evolving emotions easier to understand and the cast is able to lay out a simple roadmap that can help process those emotions. The world is a hard place to live and dealing with our emotions is the single most consistent task of any life. But if everyone of every age saw The Big Sad, I think the task could get a little lighter.

Will King once told me in an interview that people who don’t know him tend to cast him as young lovers but his friends cast him as mad scientists. I think about this anecdote a lot because it explains so much about commercial vs. indie casting then it popped into my head again when I was leaving the theatre after King’s new play. The first few scenes of Dead Broke play out like a fairly normal rom-com as King’s character Oliver loses financial support from his dad and comes up with a wacky plan to avoid moving in with his girlfriend (Courtney Keir). King and Keir have lovely believable chemistry and Gordon Harper as Johnny adds a great buddy comedy vibe to the mix as Oliver’s best bud/drug dealer. Then things get weird. Because mad scientist, remember? Dead Broke is a tightly structured, fun horror story with some great plot turns and excellent practical effects. Some of the ghostly logistics are a little confusing and the emotional stakes could get a little higher but King’s dedication to genre theatre is always a breath of fresh air and this is his most accessible work yet.

Flowers for Alex (B-)

This heartfelt drama, like many of the new plays this Fringe, is a little bit rough around the edges. The performances are a little bit broad and the script could use some fine-tuning to delve deeper into the most difficult moments as Jesse processes his guilt and mourns his friend. There’s a bit too much filler detailing the fairly innocent goings on at the party before Alex’s tragedy and not quite enough about Jesse’s struggles in the years that followed. But the core of Shan Fernando’s script isn’t bad and their direction, though mostly fairly simple, has a few moments of fun flair that make the production stand out in a landscape of barebones stand-and-deliver plays.

Ken Pak’s sweet but disjointed drama starts with a simple problem, writer’s block, then dives deeper to find the bigger problems at the root of it. It’s a great premise but the execution is scattershot, full of over-used literary references and too many surprise revelations. Clearer direction and a streamlined cast of characters would help the focus stay on John’s journey.

A quartet of goofy bros make up the crew for this tiresome variety hour full of dick jokes. The first three acts (two terrible stand-ups then an improv set featuring the same two guys) feel interminable. Finally Edworld B. Kim shows up and delivers a decently energetic set that seems far better than it is in contrast. Musical comedian Evan Dubois is the closer and he’s far and away the best performer with pretty well constructed songs and some self-deprecating charm. His vibe is early Burnham back when Bo’s defining quality was being a 22-year-old white boy and the optimist in me wants to see that same kind of potential in Dubois but I’m unsure he’s got the underlying sensitivity necessary to make his observational comedy really ache. His set was littered with awkward criticisms of the audience for not laughing enough, a trait I always hope to see comedians grow out of. His bros drag Dubois down and this show as a whole is a dud but in the final performer there might be something that could potentially be something.