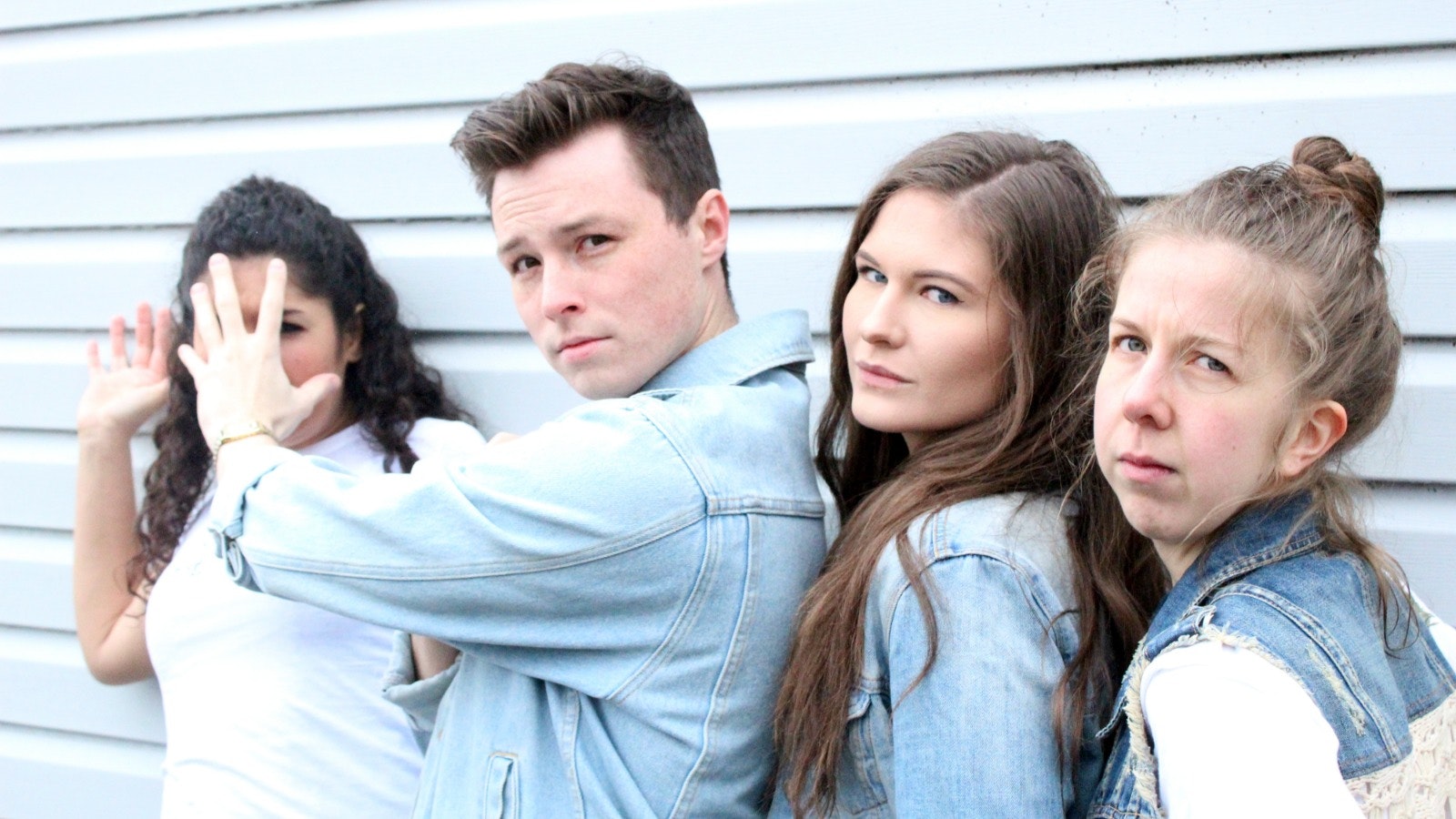 Everyone Wants a T-Shirt! (A-)
Exuberant, absurdist and smart, this Prairie Fire, Please production is a hilarious satire of the modern millennial corporate dilemma. Written by Madeleine Brown, It tells the story of Beatrice Little (Brittany Miranda), a young woman whose failed pitch for a potato-messaging service due to a brown woman having already been hired leads to her being recruited into another start-up which involves her handing out shirts reading “Women Rule the World’ and developing ‘bundles’ named after revered, successful women (Hillary, Meryl, Oprah, etc.) And that’s only the first ten minutes. The energy of the show is often less like a typical play than an extended sketch, but this works entirely in its favour. Instead of characters telling each other something they seem to announce it as if they were on hosting an infomercial, and this sense of relationships cultivated for personal gain and brand development pervades the whole show. With everyone except Miranda (who centres the play very nicely while still managing to keep up with its manic energy) playing multiple roles, it takes a particular skill to depict these different shades of opportunism, aspiration and insecurity. Huge kudos to this excellent cast (along with Miranda they include Brown the playwright, Charlin McIsaac and John Wamsley) who whip through jackets and hats, develop discrete, compelling characterizations, and remain consistently very very funny. Brown’s witty script strikes an impressive balance between intelligent critique and madcap fun, developing intriguing characters throughout the lunacy and takedown of the corporatizing of feminism. At one point a character observes that every conversation feels like a pitch, and this reflects the overall tone of the show, so that moments of genuine connection when they occur come through more strongly. Though it’s when the pace slows down towards the end and characters make statements summing up some of the social critiques of the play (“We’re all becoming the same person!”) that the confidence of the show seems to dip just a touch. Overall, however, it’s a very successful hour. Slick sound by Jake Runeckles and lighting cues by Logan Raju Cracknell, and an overall fluidly paced sixty minutes are all of a piece for a show directed by Aaron Jan with style and sensitivity, who manages character transitions, a packed story and numerous laugh lines without ever letting the show feel rushed. A great find.

Be a Good Girl (B-)
I found this a difficult show to review. Adina Katz has developed a piece that is intensely personal and deliberately unfiltered in how it addresses the issues of sexual assault and trauma that reside at its core. Katz appears to play herself and various comic permutations in pre-filmed sketches that are interwoven into the show. The work is an explicit exploration of her experiences with sexual assault and an examination of the toxic social forces that can shape young women’s understanding of men, power, and relationships in general. Katz is a very talented performer, and when she isn’t singing self-composed works while playing the guitar or piano she’s doing live sketch work to complement the video work. The more comic elements of the play didn’t work for me, tending to make their necessary points (women are groomed from a young age to appease men; gut instants about a man’s behaviour are often ignored) and then making them over and over again. Honest and blunt, the show is also quite long, bouncing between sung monologues describing Katz’ history with the aforementioned sketches. While there is a dominant theme of guiding young women into a safer and more autonomous future, it feels a little lost within Katz’ own earnest look back at how she has been failed by others. However, it cannot be denied that Katz is earnestly exposing a traumatic part of her life that has tinged everything that has come before or after, and that while I found the overall thrust of the piece repetitive, there is a good chance that I’m not the best audience member to judge the ways in which Katz chooses to examine her experience, and add it to the post-#metoo dialogue. And what certainly can’t be denied is that Katz is a wonderful, multi-faceted performer, and that her total openness is often very moving.

Bro Diaries (C+)
Bro culture has been the subject of satire for decades, going as far back as the original National Lampoon movies. While Mackenzie Parrott’s Bro Diaries isn’t specifically set in a fraternity, it features all the hallmarks of the genre, and yet it almost always chooses a mild kindness over the rough madness of the take-no-prisoners farce of those aforementioned, uh, films. Three friends, headed up by Brad (Benjamin Liddell), are desperate to get laid and follow in the footsteps of the legendary Lafleur, a revered but never seen party-master. Brad eventually meets Antoinette (Laila Kharouba), and the two awkwardly hit it off. There’s a slew of parties, dates, conversations about dating culture and sexuality, and yet the play never quite coheres into anything beyond a series of occasionally entertaining scenes. Any substantial conflict or plot is mostly absent, apart from Brad and Antoinette disagreeing as to whether or not they’re dating. A major character confesses to being bisexual, but again this never really goes anywhere, and feels like a half-hearted attempt at subverting the typical arc of this kind of bro-y tale. Benjamin Liddell’s performance grows more confident throughout and does a nice job of centring the story, and Kharouba is solid and straightforward. Jake Blum, Erica Hill and Kemi King all offer fun support as the friends, with Hill bringing an especially focused and entertaining characterization to the table. Given a few more performances and a more fleshed-out script, this could be a very enjoyable hour of low-stakes fun. As it stands it feels a little unsure, like the pre-party before the real blowout.

The Cardboard Countess (C+)
A verbose script filled with a lot of ideas doesn’t quite get the room and focus it needs to make this environmentally conscious show produced by urbanspine take root. Carson Goring plays a young, aspiring singer Ever, who inadvertently stumbles upon the titular Countess (Victoria Goring, also the playwright), a woman bedecked in a fabulous gown made of paper and trash which seems to grow out of the giant garbage structure in which she lives, which sits at the center of the Tarragon mainspace. She claims to be the ruler of a once green and luscious land which has been reduced to the desolate parking lot she currently occupies. While other nearby citizens ignore or harass the Countess, Ever develops a friendship with her, taking in her poetic odes to land lost to urban sprawl. While Victoria Goring commands the stage as the Countess and commits to the many emotional shifts of her character, she and the endearing though somewhat over energized Carson Goring never quite seem to settle together onstage, and other bits of business seem underdeveloped. The large supporting cast are given little to do and seem a little unsurely directed at times. All of this may as ever be a factor of a first performance in a new space (due to scheduling constraints, the performance I attended was technically a preview). Things suddenly coalesce into a surprisingly moving final moment, featuring the younger Goring’s lovely singing voice, but overall, the Gorings’ show is an intriguing conceit that needs a bit more time in the cutting stages.