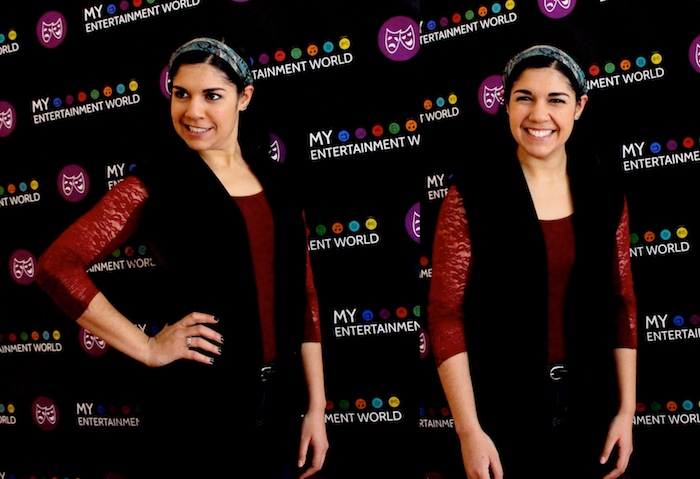 Carrie: the musical is, to be completely honest, not a great musical. And Richard Ouzounian’s production at Hart House theatre was, to be completely honest, not a great production. But Outstanding Performance in a Musical nominee Brittany Miranda carried that production on her back by sheer force of will and musical talent, delivering one of the most memorable performances of the year. As Carrie’s zealous mother, Brittany found humanity in the darkest of roles and was a shining light in a production that really needed it.

Do you remember your first experience with theatre?
I do, actually. The first time I saw a musical was The Lion King when I was 10 years old, which seems kind of stereotypical, but that was my first exposure to theatre at 10. I was like, “Oh my gosh,” came home to my mom, and was like, “Mom, I’m going to play Nala someday.” So I was very dramatic about it. As far as my mom recalls, and as far as I recall, that’s when I started singing.

That was my next question – when did you start singing?
I thought I was a horrible singer. But as soon as I saw The Lion King, I was like, “I have to be Nala,” and I started singing every day, apparently, and that just kept going along.

Where did you train?
I actually didn’t really train with anybody until high school. Again, I was just singing myself, and then I landed a lead role in a local musical, and was shocked. And then [a] music teacher through my school, Mr. Brad Bobesich, was a big influence on me. [He] took me under his wing, and started teaching me a lot about jazz and blues singing, which was pretty cool, when I was in high school. Originally, I hated it. I was like, “What is this jazz and blues?”, and then I grew to love it. Then I studied with Yoriko Tanno-Kimmons after I graduated high school, did a couple of years of vocal training with her, and continued with her while I did theatre school.

What are some of your all-time favourite musicals?
Oh, man. Cabaret, absolutely. I love Cabaret. I saw it at the Shaw Festival a few summers ago, and it just changed my views on musicals. Just beautiful. That exposed me to the acting portion, and how real and devastating musicals can be, which is cool.

I love the good classics. I love Les Mis. Who doesn’t? That’s a tearjerker. That’s fantastic.

There was a pretty crazy production of Cabaret. Do you prefer things that are outside the box and re-imagined like that?
I do, yeah. I love mess onstage. I’m one of those people. [laughs] I love that kind of thing.

Speaking of mess onstage, were you familiar with the novel or either the movie adaptations of Carrie before signing up for the musical?
I knew the storyline, but I hadn’t read the book at that point. But I read the book before I did the actual performance. I learned a lot. [laughs] It’s quite a story, for sure.

Would you say that your performance is mostly based on the book iteration more than the famous movie version?
Yes. It’s interesting – I watched the newer movie version, actually, rather than the older movie version. I think it was great. It was a nice amalgamation of the two. We took a lot of our character study type things from the older versions, and then just tried to bring it into [modern day], which was nice. So it seemed to be a bit of both, I think.

But the novel offered a lot of backstory for our characters, and the underlying grunge of the musical, which is neat. That being said, the mom in the book is very differently described in terms of how we represented her. So in terms of trying to switch that from the really grotesque way they described her in the book, she’s taken [to] modernizing it a little bit, and bringing a little more humanity to her, I think.

She is generally portrayed as kind of a monster. She’s this over-zealous, abusive mother. Was it difficult to approach that with empathy and ensure that her humanity came through?
Whenever I try to approach a character, I try to approach it without judgment, first off. So as far as I was concerned in terms of playing the character, I tried to always be empathetic to her in the beginning, and really approach it from what her motives were, and come to the conclusion that everything she does it out of love. It’s a weird conclusion to come to, but I think it really helped to create that base that wasn’t just the monster, but the person who loved her daughter so much, had so much guilt and an abusive past, that that all came together into this very overprotective extremist mother.

Tell us a little bit about the score of the musical, and how the songs that you had to sing folded into your interpretation of the character.
I felt quite lucky to be in this musical. She has such killer songs; Margaret’s songs are such great belter songs. They’re full of so many wonderful emotions. To me, the one song that stood out was “When There’s No One” in terms of really grounding the character, and that being her one real moment of vulnerability. In general, I find the music quite beautiful in terms of the way it’s written, especially for Margaret’s pieces. There’s a lot of words you can really ground yourself on that I found helped with that.

What were some of the biggest challenges of the production?
It’s such an iconic story, so bringing that to life. Bringing to life a mother who is very much demonized – and I think that was a huge challenge, in terms of trying to bring the humanity to it. Definitely a big challenge. Just the challenge of things like the blood drop onstage. All the staging of it was quite tricky. The humanity was probably the biggest negotiation that had to happen.

You’re obviously much younger than the age of the character and you don’t have children. How did you approach getting into that headspace of being a mother and even just playing an older person like that?
That’s interesting. A lot of research, in terms of really researching the character and really trying to get into her headspace. A lot of relating it to similar experiences. Obviously, I don’t have children, and I’m not a mother, but I can still tap into those feelings of caring for somebody quite earnestly. I have a little sister. How much can you love somebody and really try to defend them and be loyal to them? I think tapping into those emotions was really great. Working with Tiyana [Scott, playing Carrie] was really wonderful in terms of building that bond between us. She’s younger than me, so it was nice to be able to at least have that little bit of an age gap.

The production was directed by Richard Ouzounian, a theatre critic who’s retired and now a director. Could you feel that background in his directorial style?
I don’t know directly, per se. I’m not really sure, actually. That’s an interesting question.

Do you have a favourite moment in the production?
Again, I love the mess on the stage. The moment where I get to stab Carrie was pretty fantastic. But beyond that, again, the solo. I love “When There’s No One”. That’s such a beautiful song to me.

Do you have any bucket-list roles?
Well, right now I’m in Cabaret at the LOT, and Sally Bowles has been one of my bucket list roles. Now that that’s crossed off my list, I think I’ve got to start looking for another top choice. There’s so many to pick from. So many beautiful roles out there.

Tell us a little bit about Cabaret.
It’s been a fantastic experience. Absolutely incredible cast, incredible crew, and it’s been so fun to play such a crazy character. My fingernails are painted green constantly. I’m picking it off during the week. [laughs] It’s just been a really fantastic experience to get into such a vivid character, and to go from somebody like the mother in Carrie, so dark, to go into a character who has such darkness in her, but plays it so light, and with that [British accent] lovely British accent. It’s been so fun.

Do you have anything else coming up that you want to talk about?
I just finished directing a show, which is at Alumnae Theatre for the New Ideas Festival, so that’s just opened this week, which was nice. A few little things here and there, and I’m getting married this year, so that’s really the focus after that.

Do you have anything you’d like to add?
Just really happy to be here, and very grateful for the nomination. It was so kind.