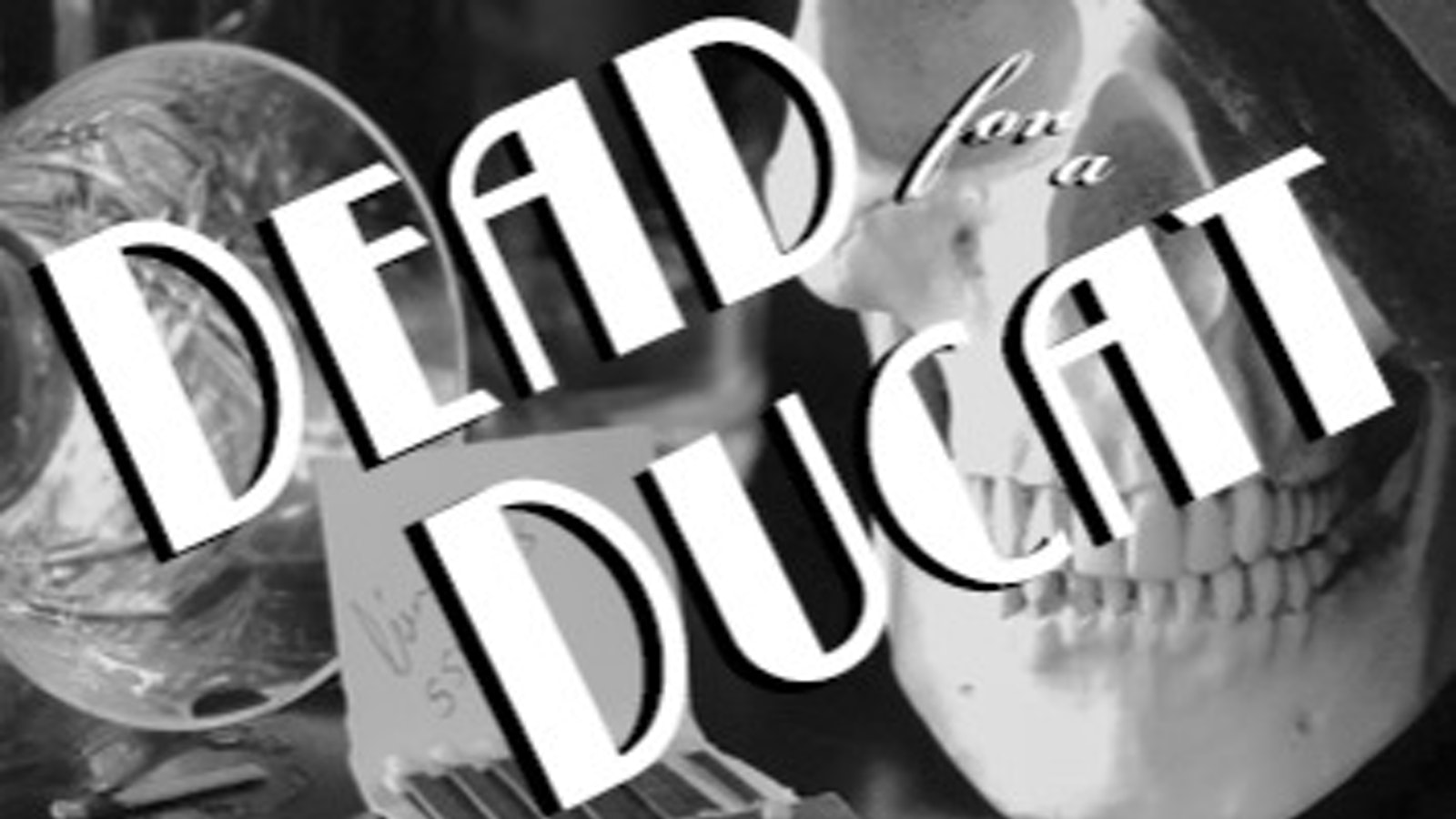 Dead for a Ducat (A+)
Hamlet in 85 minutes as a film noir two-hander. The concept sounds either silly or impossible but Reign or Shine Productions somehow pulls it off in a way that’s both technically impressive and emotionally involving. I was expecting a satire but playwright Matthew Klein and director Kelly M. Johnston are deathly serious in their high-concept adaptation, packing a preposterous amount of Hamlet‘s complexity into the short show and blending it brilliantly with truly faithful film noir details from language to manner to pacing. Peter Coleman gives the standout performance of the festival as he slides chameleonically between roles, differentiating each character with precise physicality and astounding vocal control (tone, accent, timing, ticks- close your eyes and he’s unrecognizable). Both Coleman and Charlotte Foster play nearly every character of the ten in the story, swapping out to avoid having to talk to themselves. Johnston choreographs the transitions intricately with distinguishing costume pieces selected by Sarah Beck being passed off between actors to help the audience keep track of who’s who (there’s a very helpful character guide in the program to help you sort out the roles and relationships; I highly suggest reading it before the play begins because it all moves very fast and is just different enough from Hamlet to confuse you). The feat of translating Hamlet into an 85-minute stylized crime thriller is impressive enough- and the fact that Johnston, Coleman, and Foster are able to execute the high-wire act without the high-wire becoming the point is incredible- but Klein’s writing on an individual scene level is what really stood out to me. It would have been so easy for Dead for a Ducat to lean on clever references and the satisfying cuteness of crooked cops named “Roz Crantz” and “Gil Stern”, or earn the audience’s applause with just the technical execution of two actors playing ten roles with precision and versatility; those things alone could have made it a pretty solid Fringe hit. Instead, Klein wrote an actual play, a complicated drama that grapples beautifully with big Shakespearean emotions then artfully undercuts any sentimentality with the tragic tough-guy language of film noir. His take on “to be or not to be” as delivered by Coleman is one of the best monologues I’ve seen in a very long time; a conversation between the Ophelia and Laertes-inspired characters is such stuff as dreams are made on (choose not to worry about the fact that the Ophelia and Laertes characters are in love, this isn’t Hamlet). Dead for a Ducat is the perfect Fringe show; it’s bare-bones and rag-tag and clever as anything but it satisfies so much more than just the “hey, this looks cool!” promise of its premise.

Anywhere (A)
This was my most anticipated show of the entire Fringe. The 8-person production team has nine MyTheatre/Critics’ Pick Awards between them, including the reigning New Play and Outstanding Direction winners (Michael Ross Albert and David Lafontaine respectively), so I had incredibly high expectations. Those expectations were met fairly easily. Anywhere is really good- atmospheric and impactful, well-played by exactly the right cast (Courtney Ch’ng Lancaster and Cass van Wyck; here is where I talk about David Lafontaine’s eye for casting because I always talk about David Lafontaine’s eye for casting). It’s without a doubt a must-see of the Fringe and that’s about as easy a consensus opinion as there is to be found at the festival this year. But I mostly want to use this sold-out/everyone’s-favourite/best-of-fest moment to encourage you to pay attention when it’s not Fringe time and there isn’t as much of a spotlight on indie theatre. Anywhere is great but it’s not career-best for anyone; these artists are this good pretty much every time. I expect to see you at The Assembly.

Bakersfield Mist (A-)
Thomas Gough is really fantastic in this serviceable but unremarkable site-specific two-hander about art and class. An undisputed MVP of the Toronto scene, Gough is one of very few real talents in his demographic working in indie theatre and his incredible consistency deserves more attention than he gets. As an uppity art expert sent to a trailer park to evaluate the authenticity of a potential Pollock, Gough gives a deeply emotional and heartbreakingly bottled up performance full of intriguing motives and things left unsaid. It’s a decent play in general but go for Gough.

The Cockwhisperer: A Love Story (B+)
A strong solo show with some surprisingly big emotion to make up for a few flat laughs, Colette Kendall’s Cockwhisperer is every bit as dirty as it sounds but her frankness makes the payoff matter more.

Shit I’m in Love With You Again (B)
This light storytelling musical show is a little bit goofy and a little bit self-indulgent but it confronts its fair share of ugly truths even beneath all its glitter and feather boas and ultimately reaches one of my favourite conclusions of the Fringe, that the most romantic three words aren’t “I love you” but “I know you”.

The Merkin Sisters (B)
Okay, so, cards on the table, I hated this show. I think Ingrid Hansen is a genius and I’ve liked her work without liking the program description in the past so I took a gamble on this one even though it really didn’t sound like something I’d like. It isn’t something I’d like. It’s the silliest stuff in the world and, with the help of this show, I’ve discovered that my tolerance for vagina jokes is far lower than other people’s. BUT it’d be ridiculous to say that this show isn’t good. It’s inventive and self-assured, every detail executed with absolute precision. It just wasn’t for me. So, I split the difference between my heart and my head and gave them a B, but really it’s an A/D.