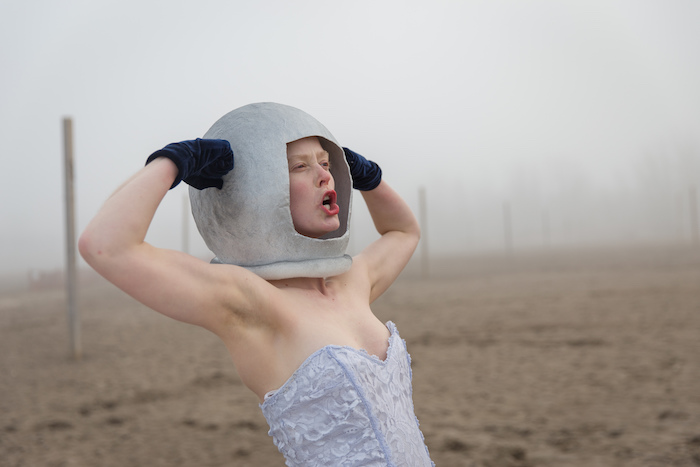 The brilliant Ingrid Hansen is a one-of-a-kind physical performer and out-of-the-box theatre creator. Her work is inventive, thoughtful, hilarious, and moving. She’s nominated this year for Outstanding Solo Performance for her Fringe piece Interstellar Elder, an odd, delightful, and heartbreaking 75-minute masterpiece about a woman aboard a space ship who finds herself awake and alone and forced to make a life for herself by herself.

Can you remember your first experience with theatre?
Love/hating ballet class and playing a fork in our studio’s production of Beauty and the Beast. Still remember the choreography. I was a fork, but I wanted to be a cake.

You have a very distinct personal performance style. How did that physicality develop?
Ooo who knows? I’ve always had a weird body. Studied gymnastics as a kid, then dance, then butoh, then puppetry, viewpoints, suzuki, clown, more puppetry.

Tell us about Snafu and its founding principles.
We aim to convert new audiences. We often get the feedback, “I didn’t think he would like theatre, I dragged him along, but he LOVED YOUR SHOW.” We tend to elicit a hard-core fandom in our audiences, some even competing to see who can see our show the most times (I believe record to date is 14 times.)

SNAFU’s work invigorates audiences of all ages, creating dynamic spaces for young and old to experience art together under new terms. Our creative collaborations connect multi-disciplinary artists in theatre, storytelling, puppetry, dance, live music, circus, and visual art. SNAFU targets audiences who do not normally go to watch live theatre. Spectators are invited to have an active role in the action as it unfolds.

We work to foster an open-hearted, anti-oppressive and queer-positive working environment, and create work that sheds light on situations where people are marginalized, oppressed, ignored or forgotten. SNAFU artists create dynamic visual design with a low ecological footprint, using repurposed, recycled and found materials as often as possible.

SNAFU also creates and performs site-specific work in fields, warehouses, public parks, bike trails, washrooms, schools and prisons. Behind bars, SNAFU creates shows together with the inmates at William Head Prison with the support of the CRD Arts Council and the Canada Council for the Arts.

The company was founded in 2006 to create original theatre, dance theatre, and puppet theatre. SNAFU has since created and produced 15 full-length theatrical productions, 7 site-specific shorts, 3 full-length prison plays, and 7 cross-country tours. The company is led by Co-Artistic Directors Kathleen Greenfield and myself, based out of Victoria, BC.

SNAFU has had our work presented by The National Arts Centre, The Great Canadian Theatre Centre in Ottawa, The Centaur Theatre in Montreal, the SummerWorks Festival and Next Stage Festival in Toronto, Theatre Direct’s WeeFestival, The Evergreen Cultural Centre in Coquitlam, The Belfry Theatre in Victoria, the Gabriola Theatre Festival, Intrepid Theatre, The Port Theatre in Nanaimo, The World Fringe Congress, Theatre Wakefield, The Undercurrents Festival, The International Festival of Animated Objects, The Toronto Festival of Clowns, the PUSHoff Festival, The Festival of Living Things, Theatre SASA, The Phoenix Theatre, University of British Columbia Okanagan, Hectik Theatre in Regina, The Puppets for Peace Festival, Noreen Young’s Puppets UP Festival, Theatre SKAM’s Skampede Festival of Theatre on Bikes, and more.

How did you develop the concept for Interstellar Elder?
It started with a character of a lonely little blue old woman who was left behind. Then it suddenly got sci-fi.

Walk us through the creation process. Was it trial and error or was everything kind of mapped out before you got it on its feet?
Combination of both. We did a week of open explorations on our feet with objects, then spent a couple months in a writing phase. We met up again and tried to stage the whole show in three days, performed it for ten guests, and then ripped it apart again and re-wrote and restaged it in another two weeks.

The sound design was a key component of the piece. Tell us about the development of that and how it played into the piece as a whole.
I had a lot of fun recording all the voices and sound effects.

Do you have a favourite moment in the production?
The ending. No spoilers.

What are you working on now and what’s up next?
Re-imagining of SNAFU’s hit show Kitt & Jane: An Interactive Survival Guide to the Near-Post-Apocalpytic Future! Opening at the Revolver Festival in Vancouver this May 30 2018. Then a big summer tour with Interstellar Elder, The Merkin Sisters, and Kitt & Jane.