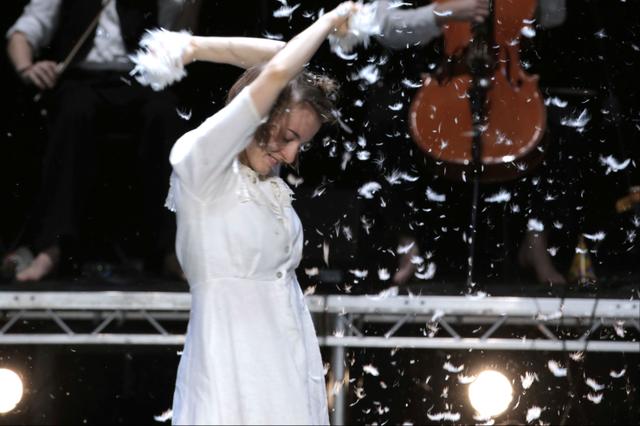 Luminato 2018 promised to interrogate the issues of human-rights, justice and inclusion, and Swan Lake/Loch na hEala does not disappoint with its dark themes of loss—of innocence, of purpose, and of hope—rape, suicide, police brutality and populist politics all feature. Written, directed and choreographed by Michael Keagan-Dolan, performed by Teac Damsa dance theatre and accompanied on stage by Slow Moving Clouds, this timely and masterful performance is evocative, visceral, and stunning.

Set in rural Ireland, this is the story of Jimmy, a man tethered to his crumbling childhood home as it provides his only connection to a sense of self while the rest of the world moves on without him. His mother (Elizabeth Cameron Dalman), whose deep love for her son is apparent, remains oblivious to his despair and organizes a party for his 36th birthday in an attempt to quickly marry him off. The party scene descends into vulgarity, wrought with discomfort and forced excess past the limits of propriety as beers are guzzled, cake is inhaled, and intimacy is debased. Narrated by a character that in turn plays the incompetent police chief, the unabashedly populist politician, and the raping clergyman, this story is not sympathetic to Jimmy’s condition.

Jimmy (Alex Leonhartsberger) moves like an apparition around the stage, demonstrative of the way clinical depression steals one’s ability to feel connected or rooted. Jimmy’s depression is absolute and he floats on stage as if there is no mass to his body at all. The dark depths of his depression magnified by the lack of support offered by his community, a society that mocks, isolates and eschews support.

Meanwhile, the local priest (Mikel Murfi) has raped a student in his tutelage and threatened her and her three younger sisters that if they talk about what has happened, they will be transformed into wild beasts, losing their voices forever. Fionnula (Rachel Poirier) and her sisters appear as swans whom Jimmy encounters when he takes his late father’s shotgun (a birthday present) down to the lake to end it all. Fionnula and Jimmy are drawn to each other, in each others company they find brief respite from the respective horrors of their lives. The arch of their relationship is built over two solos that are both aching beautiful in their tenderness, vulnerability and desperation.

While Jimmy is the protagonist, the true tragedy lies in the story of the four sisters, the swans who have been rendered un-human by the act of a holy man, to be held hostage as mythical beasts in avian form. Though Jimmy through no fault of his own loses his will to live, it is the women whose agency and personhood has been stolen from them.

The piece’s stunning ending is ethereal and surreal, achingly beautiful really, I burst into tears and I didn’t know why. Like a white feather filled music box snow globe of hope and humanity. A real heaven on earth.