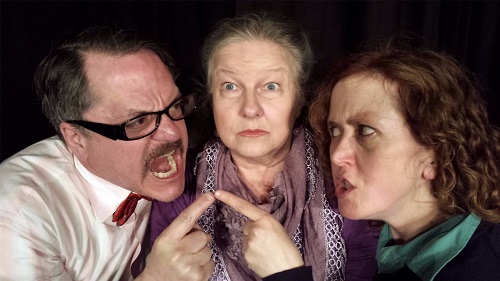 Snap! (A-)
I don’t know what I expected from Snap! but it wasn’t to be so charmed by this quirky site-specific show about four ordinary people attending a mandatory anger management programme. Led by Wanda, a facilitator leading her first session, the reluctant attendees slowly open up about why they’re there, revealing stories that cover both relatable and absurd territory (a breakdown sparked by the destruction of a $12,000 garden cherub!). The script is well-written and kept me chuckling throughout, and the talented cast make it look easy, even when they’re spouting large volumes of dialogue. The characters are undoubtedly quirky, but I could also recognize people and situations I knew in them, such as the suburban man feuding with his neighbours about his lawn and the woman who feels trapped and unappreciated in her job. The play could perhaps benefit from some broader discussion of dealing with anger issues and from addressing the uptick of anger in the world that its synopsis references, but this is a cute show nonetheless.

13 Ways The World Ends (B+)
Sketch comedy collective Good Morning Apocalypse’s show about the end, or rather “ends” of the world, finds humour in everyday people dealing with the apocalypse. As the world meets its end in no less than thirteen different ways, we’re introduced to moms fending off zombies while they lament the difficulty of being single parents, the plague-infested Mary, who contaminates the office when she won’t take a sick day, and one of the last survivors of a nuclear attack who is overjoyed at his newfound time to read…until other survivors appear with considerably noisier hobbies they suddenly have time to pursue. Some of the sketches could use a little fine-tuning, as there were some fumbles over lines at the performance I saw, but it’s an enjoyable show performed by a  uniformly strong cast.  The unique concept leads to genuinely funny moments, such as a rhyming ode to Cthulhu, which is a highlight of the show. Snippets of topical music (such as “Black Hole Sun” when the sun is exploding) are used to clearly delineate when a new sketch is about to begin and are brilliantly chosen. 13 Ways The World Ends may deal with dark subject matter, but there’s an underlying optimism to the sketches that’s well summed up in the author’s note, “Remember: Just because the world is ending, it doesn’t have to be the end of the world.”

Happy Birthday Benjamin Holloway (B)
There are strong performances and compelling interactions in this slow reveal drama about friendship and secrets, but it’s let down by an ending that feels contrived and overdramatic. On Benjamin Holloway’s (Evan Mackenzie) 21st birthday, his best friend Aaron (Chase Jeffels)  arrives late with a story about being drugged by his Tinder date. Tensions escalate further when it’s revealed that Ben has invited Cameron, who he met earlier that day in a bike accident, to a celebration that has traditionally involved just Ben and Aaron. The scenario of an unreliable friend who forgets about plans is relatable, as is the third wheel element of the play (Mike Ricci in a performance that reminded me of Elder Cunningham in The Book of Mormon, both awkward and exuberant), and the small three-person cast work well together, giving nuanced performances. Three quarters of the play is really compelling to watch but, without spoiling too much, the ending feels rushed and requires a truly prodigious suspension of disbelief to take seriously.

Post No Bills (C )
Post No Bills is an ambitious attempt to compress memories of The Ward, a 1950s Toronto neighbourhood of immigrant communities that was destroyed in order to make way for a new City Hall. It has some wonderful moments, but others are muddled and the piece lacks cohesion. There are some exquisite moments of choreographed movement and dance, especially from Mirabella Sundar Singh, and I found a child’s experiences during a frightening Latin American revolution, as performed by Ximena Huizi, absorbing, but other stories are developed with less clarity. It’s a distinctly experimental piece and I didn’t always feel as though I understood it, but I admire the depth of historical research that the Post No Bills Collective has obviously undertaken to present this collection of stories from Toronto’s past, and the light they’ve shed on a forgotten part of local history.