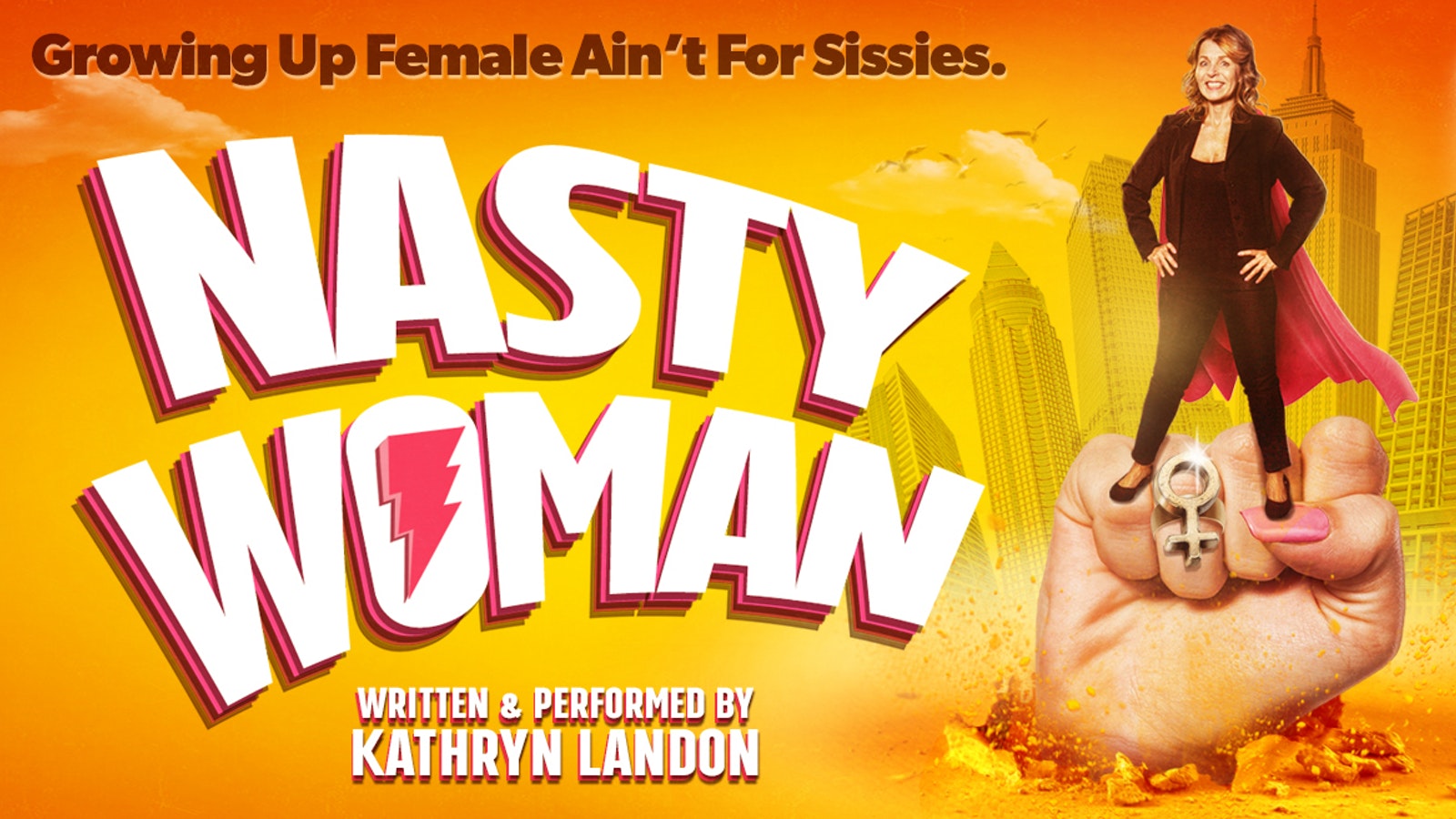 Nasty Woman (A-)
Written and performed by Kathryn Landon, Nasty Woman is part stand-up, part one-woman show about Landon’s struggle growing up as a poor woman in Toronto. Landon is a natural performer, easily connecting with her audience and her own emotions as she leads us through the journey of her life, delving even into the murkier, uglier things with grace and humour. She’s telling the stories that we need to be brave to tell, stories that almost every woman has about this teacher or that uncle, the experiences that form us as people and help us figure out which battles to fight as adults. It’s also a story about how even when you think you have your life figured out, there are certain losses you are never prepared for. This show needs a director to take it to the next level with more robust blocking and perhaps a deeper exploration of some moments, but overall the show is – to use a perhaps overused adjective – authentic and deeply touching. Check this one out if you can, you won’t regret it.

Pineapple Club (B+)
The programme describes this show as a mashup of sketch comedy and comedic dance, and that is exactly what it is. Performed by Paul Barnes, Jonathan Shaboo and Pascale Yensen, this show is just under an hour of singing, dancing, and general hilarity. There is a general theme here of contemporary existential anxiety, but that’s about as cohesive as it gets. All three are excellent comedic actors, dancers, and singers. Best really to just sit back and let this show wash over you, and enjoy it for the entertainment it is – not to mention the catharsis of the sing-a-long at the end. Fun and silly, this show is a welcome counter-point to the more serious stuff.

The Moaning Yoni (B)
Joylyn Secunda’s play about the anthropormorphized vagina of a young woman navigating the stresses of the patriarchy is sweet, funny, and has a lot of potential. Zoe’s attempt to discover her needs and desires is flouted at every turn by bad advice, moralizing, and men aggressively and selfishly asserting their desires while ignoring hers. Secunda’s performance is admirable in her commitment and enthusiasm, her range of characterization, and the energy she throws into various sequences, my favourite being a lineup of bad kissing styles. She could pull back a tiny bit on some of the comedic characterization which borders on caricature-ish, especially regarding the other women characters, and towards the end I lost the thread a bit, and so the show could benefit from some signposting to help the audience understand the climax (pardon the pun) and the resolution.

4.48 Psychosis (C)
You don’t often see Sarah Kane’s dark explorations of mental illness produced outside the UK, and so it’s extra disappointing when a production of her work is not done well. Whitbread’s performance of a young woman’s depression is like watching someone perform Shakespeare badly. Without a sense of what someone is doing with their words, what the stakes are at every single moment, even great poetic work will fall flat. Not only is Whitman not dropped into her body, there is a plethora of apologetic body language (eye-rolling, shrugging) that undermines the strength of Kane’s words, and often straight up contradicts the narrative. Audio effects add a bit of dimension but feel at times like a crutch rather than a real addition to the script. Whitman is definitely at her best when she is dialoguing with the other characters, but during the monologues a lot of the meaning of the work gets lost. It’s certainly important that we produce theatre that addresses mental health and mental illness, but the very fact that there isn’t much out there means that the stakes are even higher, and the responsibility that much greater.