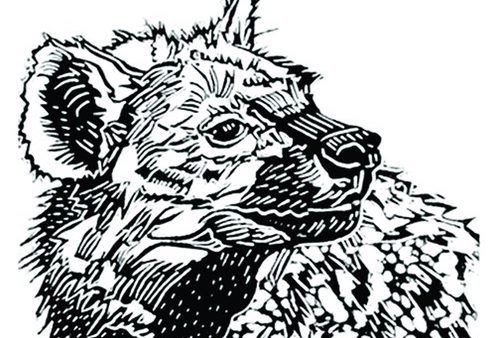 Hyena Subpoena (A-)
Before the lights go down, the stage is set up as a campsite: a tent, a pile of wood for a fire, a thermos. And indeed, it often feels like Cat Kidd is telling us a kind of story over a campfire, if that story were a dense and engaging cri de coeur that begins as a sort of slam poetry/hip-hop hybrid lecture on how hyenas and lions function in the animal kingdom, before sliding seamlessly into a layered and passionate description of a woman’s childhood. If that sounds cheesy it certainly doesn’t play that way: Kidd’s text is rich and thoughtful, poetic in its ability to merge jungle imagery, Fawlty Towers references and a small-town adolescence, while projected videos of the aforementioned animals are projected on the tent, as if the whole play were a nature documentary. Split into several chapters, Kidd’s play (the last I saw at Fringe) is the one whose text I’ve most wanted to read afterwards: it’s witty and carefully structured, without feeling distant or academic. This is also helped by her vibrant, joyful performance, which exhibits a free-spiritedness that fools you at the beginning into thinking that it won’t be nearly as multi-dimensional as it becomes. She whips through her complex text without ever flagging, and bounces between stories and styles of delivery with ease. The play’s unconventional structure means that Kidd avoids any didactic quality to her text: the play ends with an enigmatic and strange story about her teacher. This was for me a lovely discovery and one that, with limited time left in the festival, I thoroughly recommend seeing.

Love and Information (B+)
Caryl Churchill’s 2012 play is a goldmine for a large cast: it is structured in seven sections, with each section made up of several scenes which can be played in any order and gendered and populated in anyway the creative team sees fit. The scenes flit from conversations about irrational numbers, falling in love with a robot, and monologues about treasured memories with a friend. Students from Randolph Theatre School have crafted a high-energy version of the play, with all the actors playing multiple roles (it’s implied that some characters recur), and all do a skillful job of distinguishing between personalities and building up audience sympathies even as they become different people. Ultimately the play’s focus is on exactly what its title promises: the intersection between our ability to connect and empathize in a world that encourages a constant engagement with proliferating amounts of data and trivia, expanding our ways of knowing and quantifying the universe while spreading us thinner and thinner. But the production’s perspective on the increased availability of information isn’t cynical: indeed the most profound moments happen when characters are able to connect through their understandings of the world – like a moment where two boyfriends discuss how stars travel hundreds of millions of light years to become visible to humans in the night sky, which transitions into a lovely sequence where every cast member wanders onto the stage to look up in awe as a rich synth score plays throughout. While the performers rarely flag in energy, the show does lose some momentum as it goes along simply by virtue of our having to re-acquaint ourselves with a new scene every few minutes, with many of the themes and ideas becoming a mite repetitive as we make our way towards the conclusion. And the flexibility of the text made me wonder about the potential for even more audacious staging opportunities. Still, he dynamic text, strong cast, and well-paced direction by Andrea Donaldson make for a stimulating show and an optimistic cry in the midst of the digital woods.

The Door (B-)
In The Door, produced and developed by the Saye Theatre Company who have come from Iran to showcase their work, we are taken into the lives of two Iranian women, who at the beginning of the play are each struggling to maintain their composure as they wait for visas to travel: both originally from Tehran and both now living in Toronto, one (Mina Zaman) feels compelled to return to Tehran but is emotionally torn between cities, while the other (Shia Makinian) is compelled to return due to an expired visa. Makinian and Zaman, under the direction of Mehdi Mashour, deliver moving and heartfelt performances: Zaman’s youthful character (“28 but people say I look younger”) is more flamboyant in her anxiety, while Makinian’s more thoughtful figure exhibits a grounded contemplativeness throughout. The show is at its strongest when both are at their most tense, unsure of their years-long sense of displacement is affecting their psychological health.

Their monologues mirror each other in interesting ways, both obsessing over the sound of a washing machine which makes them feel grounded and at home, and both asking the audience at pivotal moments whether they have gone crazy (in each instance, the other actor drops a key prop onto the ground). Household items play key symbolic roles: paintbrushes are used in place of hairbrushes to emphasize a character’s passion for painting, and each woman wears correspondingly mismatched shoes, perhaps to underline their divided allegiances to each city and the bond this creates between them. While they never converse with one another, the parallels between them are emphasized enough for us to imagine them as a united pair. They also perform some intriguing interpretative movement work at the conclusion which illustrates how, despite how much ground they’ve covered, they are stuck in a cycle of back-and-forth movement. Saeed Hasanlou’s stark set design includes a red electric sign blazing from the back wall of the stage reads ‘Enter/Exit’, one giant ‘E’ used for the beginning of both words, illustrating how one act seems to lead to the other, resulting in an emotional and physical paralysis, a situation made worse by their being stuck in the bureaucracy of visa offices.

However, despite the efforts of both performers, the energy of the work is lost a bit amongst monologues that seem overstretched and which circle around the same issues and motifs over and over without ever quite gaining dramatic urgency. This static feeling comes partly from the fact that each actor spends twenty or so minutes delivering a monologue while the other sits and watches them from the side of the stage. Witnessing and feeling the pain of another is I think key to this work, but the lack of dynamism in the structure makes it difficult for audience interest to be maintained. Perhaps cutting back-and-forth between the speeches, or clarifying certain plot elements, would work towards sharpening the central dynamic. Still, these are compelling performances in a work that gestures movingly towards the daily reality of women feeling torn between their homes and their dreams in a politically fraught time.