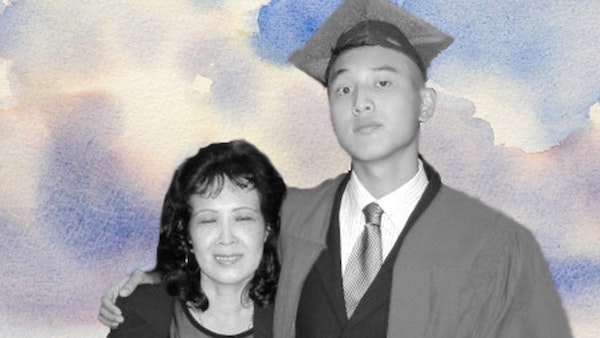 soaring through liquid skies (B+)
Franco Nguyen’s one-man show about his childhood and his education about his mother’s personal struggle with leaving Vietnam for a new life with a neglectful husband is entirely charming. The performance is comprised of Nguyen’s narration, some action, and video footage from his recent trips back to Vietnam as well as some other footage of his mother in Canada. Part one-man show, part documentary, part stand-up, Nguyen is a natural performer, delving into details and using hilarious imagery to help the audience connect not just with events but also with the feelings he has about them. The show could benefit from a bit more direction – making the blocking a bit more consistent, and bringing out some more of the action even during the stand-up moments. I’d also recommend changing the spotlight that sits on Nguyen during the video clips, which feels awkward and lacking in focus – a few times he stands looking at the wall and I wasn’t sure if he was in character. Having him looking at the video, or taking the lights off him entirely during that moment would give the video clips more (well-deserved) attention.

For the Love of Pie (B)
Melissa Paulson plays Georgia Peach, a connoisseur pie chef and television personality extraordinaire. Amidst her flurry to impress new producers, her career starts to slip through her fingers, revealing the darker side of the ostensibly cheerful woman who loves to bake pies. The show is cohesive and interesting, funny and touching, and Paulson does a great job of dropping easily into several different characters, making them clear and distinctive and very watchable even when she’s having a conversation with herself on stage. My only problem was that I wanted more development of Georgia’s relationship with her son, and his relationship to her. By the end things seem wrapped up too neatly and tidily – it seems like there is definitely more nuance that could come out of the climax and the resulting consequences, in Sylvester’s relationship with himself, his mother, and his career.

I Ate the Sandbox (C-)
Khadijah Jamal’s one-woman show about the story of her life contains the seeds of an interesting story but it’s got a long way to go. Every year I see a show like this, about someone’s life, about their struggles, and how they overcame them. Writing one-person shows about one’s life is not unlike therapy, and, not unlike therapy, people tend to veer away from the darkness. This isn’t surprising, after all, stressful things are stressful (in logic there are no surprises). It’s not easy to examine ourselves, to lay ourselves bare, and Jamal’s show is no different. There are some emotional events to delve into: the loss of her father, the downfall of her marriage, the resulting depression and how she struggled through that. But currently the story plays like a children’s bedtime story: it’s too neat, it wraps up nicely in a bow of triumph and wisdom. But that’s not theatre – I wanted more of the messiness of life, the paradoxical and conflicting and confusing emotions that arise when someone you love dies, the reasons she decided to continue in such a dismal marriage for as long as she did, and the details of the feelings that got her to the point where she decided to leave it. Instead, she tells us a sanitized version, peppered with pop songs that are random and unmotivated, and little to no action on the stage. For this show to grow, Jamal needs to do even more digging to get to the messiness, develop the places where she was being victimized, sure, but also the places where she figured out how to take responsibility for herself, pushing past only her perception of the story. Then instead of telling us, show that to us, show us the grit and the ugliness and the vulnerability there, because that is also where the real beauty of theatre resides.