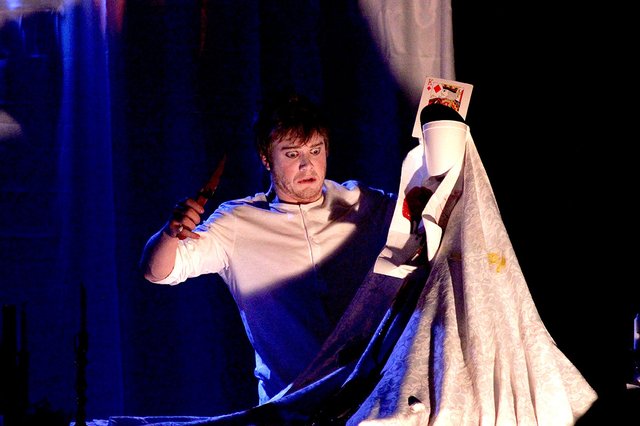 Every day during the Fringe, I get asked the same question about ten times- “what’s the best thing you’ve seen?”. The answer is Macbeth Muet. Not “well, there’s a lot of great stuff; it depends what you’re in the mood for, but I really enjoyed Macbeth Muet“- there is a lot of great stuff (I particularly loved both Martin Dockery shows this year, Peter N’ Chris’ new play, and Real Actors)- but that question has a definitive answer and it’s just simply “the best thing I’ve seen is Macbeth Muet“. Full Stop.

The delight of this show is particularly notable because I didn’t see it coming. An under-publicized wordless two-person piece imported from Montreal, this show literally only made it onto my Fringe schedule by virtue of being a well-timed bridge at the Tarragon between the aforementioned Martin Dockery shows and Peter N’ Chris. I’m a pretty big Shakespeare nerd but I doubted a 50-minute mimed retelling that advertises “funny silent film gestures” as its big selling point would be up my alley. But boy did the Fringe Scheduling Gods have my back on this one.

Macbeth Muet is an extraordinary piece of work, a showcase of intense creativity and bold, thoughtful interpretation. Complete with laugh-out-loud music cues, paper plate puppets, and inventive paper towel title cards, Macbeth Muet is not just a presentation of a familiar story in a compelling new form, it features nuanced takes on the characters and breathtaking silent performances from Jeremie Francoeur and Clara Prévost (who play Macbeth and Lady Macbeth while puppeting the rest of the cast with household objects). In 50 minutes, without a word of Shakespeare’s text, La Fille Du Laitier communicates a far more precise and personal vision of Macbeth than most 3-hour productions I’ve seen. The intensifying grossness of the muck-covered stage as the casualties pile up, intriguing character development telegraphed through characters’ contrasting sexual styles, the traumatically visceral murder of Lady Macduff and her children- the theatrical flair and remarkable insight of co-creator/director/sound designer Jon Lachlan Stewart’s production blew my mind at every turn.

If you only see one show this Fringe, see this one.