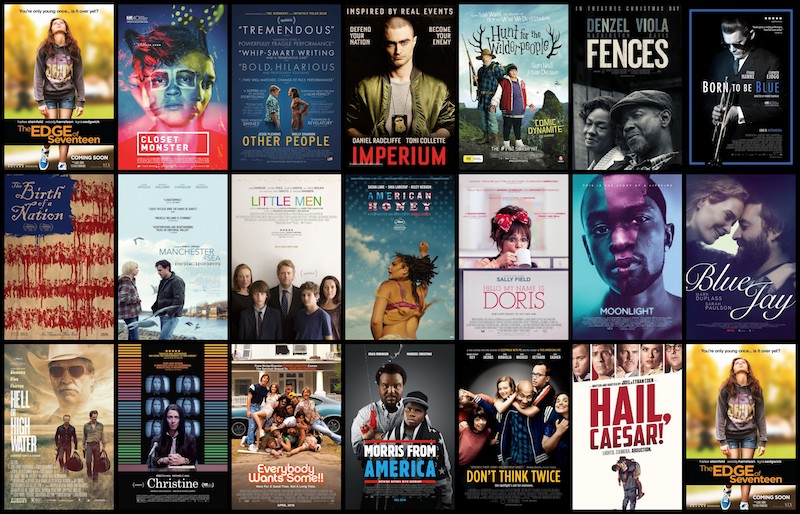 This is it, the best part- my favourite films of 2016! These were all So Freaking Good. A lot of them were tiny and didn’t get nearly enough love or attention but I’m delighted and surprised to actually line up with the Academy a little bit in that the Best Picture, Best Screenplay, Best Actor and Best Supporting Actress-winning Oscar films are all actually in my top 15; I feel like that’s the closest we’ve ever come to agreeing.

1. The Edge of Seventeen
I just love this movie so much. Produced by James L Brooks but written and directed by newcomer Kelly Fremon Craig, this perfectly cast gem is easily the best teen movie of the decade. Hailee Steinfeld gives the performance of her career by miles (and that includes True Grit, so it’s saying something), an infuriating, contradictory, complex portrait of a realistic modern teenager that I honestly don’t think would have worked with any other performer (or any other writer; Craig’s work here is incredibly insightful and perfectly balanced). Woody Harrelson, Kyra Sedgwick and Blake Jenner are all fantastic in supporting roles, as is Hayden Szeto who is the perfect sneakily dreamy boy next door, but in my opinion the lynchpin supporting turn comes from Haley Lu Richardson who brings a cool quietness and real heart to the best friend whose devotion our heroine is so destructively terrified of losing. A hilarious, moving, contemplative film I could watch over and over.

2. Closet Monster
Aaron Abrams plays the most complex character of the year as the father of a young gay man in Stephen Dunn’s gorgeous drama. Connor Jessup is an entrancing leading man and Dunn intriguingly pairs subtle plotting with grandiose visual flair and patient pacing to make this one of if not the best Canadian film I’ve ever seen.

3. Other People
SNL head writer Chris Kelly wrote and directed this gorgeous indie about a young man who moves home to care for his dying mother. Jesse Plemons finally brings the incredible pathos to film that he’s long showcased in television roles and Molly Shannon stuns in a role you’d never think of her for but likely won’t be able to get out of your head. Small, sweet, irreverent and heartbreaking, Other People is a brilliant debut for Kelly.

4. Imperium
How was this not an Oscar movie?! My favourite serious drama of the year, Imperium is disturbing and incredible with a standout performance from Toni Collette and an ensemble who dives into their white supremacist roles with terrifying intensity to brilliant effect. I’ll admit I was previously not sold on Daniel Radcliffe as an actor. He was a cute kid, has intriguing taste in film roles, and he gives a good interview, but it wasn’t until Imperium that I thought he could act. Holy shit can he ever act. Again, how was this not an Oscar movie?!

5. Hunt for the Wilderpeople
This Netflix find is a darkhorse delight about a kid and his foster dad who go on an adventure in the New Zealand wilderness. Tender, honest, and deeply deeply hilarious, this is my feel-good recommendation of the year.

6. Fences
Tour-de-force performances and August Wilson’s extraordinary script are what make this adaptation what it is. There isn’t a lot of filmmaking flair but it doesn’t need it. Denzel Washington keeps his direction focused and simple so that the play’s power remains fully in tact.

7. Born to be Blue
Ethan Hawke, boy, where would we be without Ethan Hawke? Certainly my movie collection would be pretty much nowhere. He’s just the best. His performance as Chet Baker in this boldly unglamorous jazz biopic might be his best ever. More people ought to have seen this beautiful piece of work. Bonus points for the inclusion of Canadian theatre legend Tony Nappo in a supporting role.

8. The Birth of a Nation
I don’t know, man. I understand the arguments against Nate Parker and supporting his career but this movie is unbelievable and it breaks my heart more than a little that it never got the chance to be recognized as such. The most brutal, hyper-realistic depiction of slavery I’ve ever seen on film, The Birth of a Nation makes 12 Years a Slave look like Hollywood bubblegum. It’s a gut-punch of a film and showcases career-best work from tons of artists, not just Parker. I don’t like to judge art by the morality of the artist because the slippery slope could be fatal (not to mention the fact that there are certain hypocritical demographic trends one could notice about which artists popular consensus gives a pass and which are essentially blackballed). All I’ll say is that The Birth of a Nation is exquisite and I really wish you would see it, though I understand why you likely won’t.

9. Manchester by the Sea
See the above paragraph (including and perhaps especially the parenthetical) for the only thoughts I’m interested in offering on the topic of Casey Affleck as a person. As an actor, he’s so good here that it’s actually mindboggling; did anyone know he had that in him?! It’s perfect casting (soft-spoken, sad-seeming Massachusettes man struggles under the weight of his big brother’s shadow? Yeah, Casey Affleck seems about right) but he did also give two other awesome performances this year (Triple 9, The Finest Hours) so maybe he’s actually that good. But Manchester by the Sea is more than Casey Affleck and we should talk about that without reservation. Kenneth Lonergan’s script is funny and poignant and brilliantly structured. His direction is swift and subtle. The supporting performances from Kyle Chandler and Lucas Hedges are wonderful (I thought Michelle Williams was way too big, but I guess I’m alone on that island). The tonal balance here is simply perfect. Was there ever a movie that made such a big emotional impact so quietly? I can’t think of one.

10. Little Men
This tiny little delight of a film examines the friendship between two young boys as drama between adults forces them to give each other up. Smart, sad, and beautifully played (especially by Greg Kinnear and breakout kid actor Michael Barbieri), I simply loved it.

11. American Honey
This slow-burn beauty is a test of patience at nearly 3 hours but I wouldn’t change a frame of its slice-of-life deceptive simplicity. The film that makes you realize that there really is a reason we put up with Shia LeBeouf, he gives one of the great performances of the year.

12. Hello, My Name is Doris
This oddball comedy has an irresistible, gigantic, exposed heart (plus an insane all-star cast and a great soundtrack). I loved every awkward moment of it.

13. Moonlight
I mean, it’s Moonlight. Do you really need me to explain to you that Moonlight is beautiful and insightful and necessary and hard and uplifting and perfectly cast and gorgeously shot and creatively constructed? If so, you really need to pay more attention. Please also pay more attention to André Holland whose incredible work in that perfect third act was totally overshadowed by the Mahershala of it all.

14. Blue Jay
It’s been well documented that Mark Duplass lives right next to my heart, and you’d have to be a crazy person to not hold Sarah Paulson in the absolute highest regard. Together, they make this simple black & white two-hander a tour-de-force of character storytelling.

15. Hell or High Water
This movie works on every single level. Taylor Sheridan’s incredible screenplay is both an homage and something totally new, a personal story with big allegorical themes, simultaneously timely and classic. The casting is perfect (Chris Pine never disappoints when allowed out of blockbuster jail; Ben Foster is a revelation; Jeff Bridges is Jeff Bridges) and David Mackenzie’s shot composition and world building strike the perfect tone. No movie in 2016 was as uniformly well made.

16. Christine
Rebecca Hall’s grounded and exposed performance is the heart of this exceptional (and tragically overlooked) true story about a troubled reporter in the 1970s. If you don’t know the story, don’t google it. Just watch.

17. Everybody Wants Some
I’m extremely hit or miss with Linklater (Richard; I always love Hamish) but his latest nothing-happens-just-watch-them-hang-out comedy totally won me over, mostly because the ensemble cast of little known actors is completely irresistible. Look for them to all break out Dazed & Confused-style over the next few years.

18. Morris from America
Craig Robinson delivers a knockout emotional performance in this story about a widower and his 13-year-old son who move to Germany. A tenderly crafted fish-out-of-water film with simmering big issues and a tight personal focus, writer/director Chad Hartigan’s quiet dramedy deserved more attention.

19. Don’t Think Twice
I love improvisers. I don’t always love improv (sometimes I do; a great improv show can be unforgettable, more often it just feels like I’m watching rehearsal) but, in my observation, the practice of improv makes you a better person. Most of the improvisers I know are these beautifully open-hearted, honest, self-aware people who value teamwork and listening and follow-through; it’s not hard to draw a direct line from the principles of the art form to the development of those personal qualities. In this sweet and sad ensemble piece, writer/director/star Mike Birbiglia (god, who doesn’t love Mike Birbiglia?!) beautifully examines how hard human realities work in terrible concert with the better angels of improv as a troupe struggles to stay together amidst personal changes and competitive conflict. It didn’t quite live up to my impossibly high expectations but that doesn’t mean it’s not pretty damn special.

20. Hail, Caesar!
The casting is perfect and the cinematography spot-on in this sprawling, strange, intermittently dumb and incisive Hollywood caper. George Clooney, our truest quintessential movie star, plays the perfect quintessential movie star. Channing Tatum shuts up and smiles in a delightful dance routine that feels like a subtle commentary on the breadth of his constantly surprising talent vs. the limiting way Hollywood uses him. Religion and politics and movies and everything are all jumbled up and thrown on the table to great intellectual and comedic effect. Most stirringly, Alden Ehrenreich- a star of his generation who belongs to the wrong generation- pairs with Ralph Fiennes in my favourite scene in all of 2016- “would that it were so simple”– a repetition gag no more sophisticated in its construction than the way Family Guy is always using that conceit but laden with stirringly sad context and perfect subtly growing tension I’m not likely to forget anytime soon.