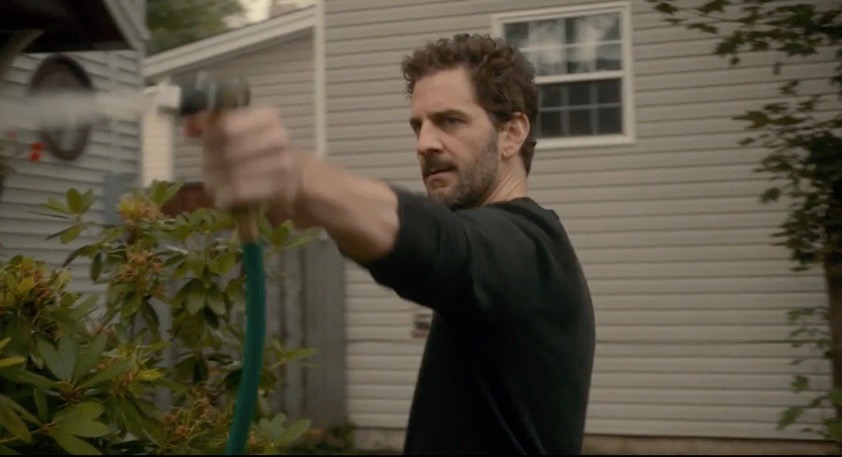 Before we announce the winners of the 2016 MyCinema Awards, we’re proud to present our annual Nominee Interview Series.

Sorry, every other nominee, but our funniest interview of the year award definitely goes to MyCinema Outstanding Supporting Actor nominee Aaron Abrams who questions the purpose of Hollywood “meetings”, praises the genius of his Hannibal captain Bryan Fuller, noshes on a bag of cashews, and psychoanalyses his superbly complex character in Stephen Dunn’s stunning film Closet Monster, one of the greatest Canadian films we’ve ever seen with a career-best turn from Aaron.

When did you know you wanted to be an actor?
Right away. Growing up, I liked performing and sports. That’s all I did and that’s all I could do. So it was either actor or third baseman. And the actor thing seemed more plausible. In retrospect, I’m not sure that’s true.

What was your first screen role?
A movie called The In-Laws with Albert Brooks and Michael Douglas. During a break, I was stuck in a long awkward silence with Albert Brooks so I told him that a giraffe’s neck has the same amount of bones as a human neck. For some reason.

One of my favourite roles of yours will always be on Slings & Arrows. What stands out in your memory about that experience?
It’s one of my favourites as well. It was a huge learning experience, that cast was so good, so friendly, so familial. The material was so amazing. I was green, but even I knew that I’d never have it that good again. I also got to spend a lot of time with Sarah Polley who’s one of my favourite human people.

You were also part of one of the most critically beloved series of the decade in Hannibal. Tell us about working with Bryan Fuller on that series.
A great experience. It’s rare to feel that a project is going to be special, but with Bryan as your captain, you know right away. He’s exploding with ideas and beauty and creativity and amazingness. And also sometimes gore. On Hannibal, there was also some gore explosions. I don’t like to throw around the word genius because I think it’s pretentious, like, who am I to anoint somebody a genius? I’m just some non-genius guy, it’d be arrogant to say that I know who is and isn’t a genius. But in this case, you don’t have to be a genius to know that Bryan Fuller is a genius.

How did you get involved with Closet Monster?
I met with Stephen [Dunn, writer/director] about it. I’m not sure how many people he met with for the role. I have a weird thing with “meetings”… I’m not entirely sure what they accomplish, other than “do you get along”. Which, I mean… I work with people all the time that don’t get along with each other and even then, it’s fine. So anyway, I showed up at this meeting and instead of chatting too much, I just had all the lines memorized and was ready to work and was just like “look, you need to know if I’m right for this and there’s only one way to do that, so why don’t I just do it.” And then I did. And then we did. And then it happened.

Peter is a deeply human but at times brutally villainous character. Was it difficult to reconcile some of his darkest actions?
Thankfully I’ve been playing jerks and bad guys and antagonists for a while and what’s great about that is you get to learn things about playing those roles, just because of the time spent doing it. In general, unless you’re playing The Joker or somebody like that, who wants to burn the world down, all bad guys have good guy reasons to do what they’re doing. Their reasons aren’t “because I’m bad”.  Peter loved his son. So much. He’s all he had. His wife left him. And when his son starts to discover is sexuality and creativity, he sees him growing apart from him and that’s terrifying to him. Because he loves him so much. And that fear leads him to do some shitty things. The actions are dark but his motivations aren’t, so that makes it easier to reconcile for me. Or maybe I’m just a jerk bastard. I dunno.

Your onscreen relationship with Connor Jessup who played your son was incredibly complex. How did you capture that sense of history and subtext with Connor?
Besides being just a natural super talent, Connor’s a deeply intricate and thorough actor. He works his ass off prepping so that, when he gets to set, it can flow easily. I try to work the same way. So hopefully there’s a relaxation to our scenes and it feels like two people who’ve lived together for a long time. But also allows for deep, specific, festering, complicated issues to exist underneath as well. Which is also like any two people who’ve lived together for a long time. Also the script being amazing makes all that easier.

Tell us about working with writer/director Stephen Dunn. Did you generally see eye to eye on the character?
I love Stephen. Another super talent that’s very annoying because he’s so talented. I think you hit a groove with certain directors, where you are comfortable with each other, willing to jump in and try anything the other suggests. I was always encouraged to play with it and I always loved diving into any bit of direction Stephen had. It’s very rare and I’m very fortunate to have that groove with Stephen right away.

What were you hoping audiences would take away from the film?
I hope they get a full movie experience. I hope they connect to it. I hope it activates all their senses and I hope they feel all the feels.

What are you working on now/next?
I appear on an NBC show called Blindspot and attempt to destroy the livelihoods of other characters. That’s very fun. I wrote and directed a short that’s premiering at Aspen Shortsfest and I wrote a movie called The Go-Getters that’ll be coming out soon. There’s a cool sci-fi movie called Code 8 from amazing writer Chris Pare and director Jeff Chan that hopefully starts in the spring. And some other stuff… the world has gotten so weird where you can’t even talk about what you’re working on until it’s officially announced first. It’s made it way more difficult to explain to people that I’m a huge, huge deal. Very frustrating.

But I can say that I’m working on a bag of cashews at present. So be on the look out for that.