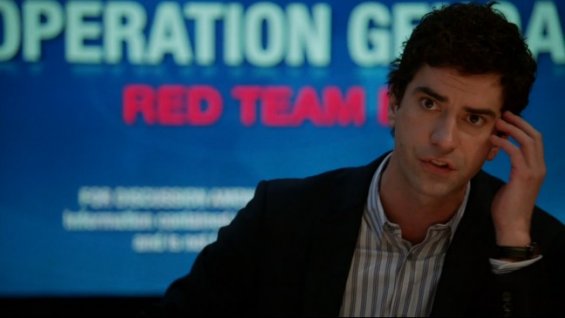 “Red Team III” was the first episode of The Newsroom that was truly great. Not just Sorkin-is-a-better-writer-than-most-people good or even wow-that-was-entertaining-and-impressive good like some of the best episodes in this greatly improved second season of the unfairly dismissed HBO drama. It was stop-playing-tetris/put-down-the-diet-coke/slow-clap-at-the-end great. It was great like season two of The West Wing was great but in a 2013 way because, let’s face it, modern cable audiences don’t have the heart for season two of The West Wing. “Red Team III” was the episode in which The Newsroom became a show that might just live long enough to be remembered as important.

Basically, this week’s episode was the culmination- in form and content- of the entire second season (the penultimate and final episodes will be about the election and likely not as interesting). Things kicked off, as many great moments do, with good ol’ Don Keefer, the sardonic saviour of all things Newsroom. It’s Don’s turn to be hauled before Marcia Gay Harden’s sometimes annoying but very good in this episode lawyer Rebecca, and he has a question- why are we even talking about this? He exposits, with Don-ish speed and wit, everything we need to know about the lawsuit that’s framed the season. He recaps for anyone who may have forgotten, he explains for those who skipped an episode or couldn’t keep up with the show’s astounding speed of dialogue, he fills in gaps that we’ve been waiting to have filled just in case our guesses were wrong.

I’ll summarize as best I can (though please do forgive the vast inferiority of my account to Don’s):
– ACN (via News Night) airs a story about a military op called “Genoa”
– The story proves untrue
– A key interview was illegally edited to support the story
– ACN loses all credibility
– The producer responsible, one Mr. Jerry Dantana (played by the wonderful Hamish Linklater), is fired
– Dantana sues for wrongful termination, cites “institutional failure” beyond his own contribution

So Don asks the question being wondered by those of us who are surprised that all this fuss is over a simple wrongful termination suit and not, say, charges brought by the Pentagon: why are we talking about this? Seems pretty cut and dry: Dantana doctored the interview, they aired the bad story, they paid the price with their reputations, Mack found out Dantana doctored the interview, he got fired. Willie Santiago is dead and Dawson and Downey killed him; these are the facts of the case and they are undisputed. (Click Here if you are confused).

But not so fast, grasshoppers, for this is HBO 2013. This is not a world where our heroes get to be right and righteous. This is not a world where Leo identifies the mole, gives her a firm talking to and she realizes how very bad she’s been. This is not a world where JJ and the network let Casey McCall stay on the air just because the Sports Night team has his back. And Aaron Sorkin has finally figured that out. Our heroes are wrong. Jerry Dantana is wrong too- he’s wronger, he’s the wrongest- but Mack, Charlie, Sloan, Don, Maggie, Neal, Will and even the reluctant Jim, they finally can’t philosophize their way out of the fact that they’ve just done a big thing badly. The answer to your question, Don, is: we’re talking about it because you’re going to lose, and you’re going to lose huge.

Around a series of the season’s best deposition scenes, the episode fills in the events surrounding the actual air-date of the Genoa story. We start with “Red Team III”, what’s supposed to be the third line of defence against a bad story. Here we’re presented with the full case built by Dantana, Mack and Charlie with the help of just about every other character at ACN (except Reese; Reese isn’t really a helper). We’ve got six major pieces of evidence: the initial tip from the crazy drone guy, two soldiers involved with the mission, a 3-star general and chemical weapons expert, Charlie’s confidential source, and some tweets that seem to be describing the use of sarin gas (as part of a mission to rescue two marines who were about to be sold for public beheading- this is the massive war crime up for discussion). We watch as this team of highly competent and highly moral people collectively reach the conclusion that, based on this evidence, the story should run. What the episode (and the whole season that preceded it, really) does beautifully is present evidence and arguments strong enough that the news team would believably invest in the story (Dantana made a particularly effective speech in the previous episode that floats quite clearly beneath the surface of the decision making process here), but nothing is so solid as to not fall apart with tragic ease when you pull just one dubious thread.

The second half of the episode is what happens after that thread is pulled.

If the episode has a flaw it’s the infelicitous convenience of  some of the debunking. The strongest piece is by far Dantana’s editing of the raw footage from his interview with 3-star general. That move is the backbone of the whole Genoa story and is based on real events from CNN history. It’s detestable and understandable, with fascinating moral implications when you weigh Dantana’s journalistic ambition with his sense of righteous indignation (especially as contrasted with Maggie’s treatment of the Zimmerman 911 tape only 2 episodes earlier). Next there was the throwaway credibility of the twitter evidence (a testament to the unfortunate cost of the populisation of journalism: more information inevitably leads to more misinformation), and the dismissal of one first-person testimony (the soldier lied about having suffered a brain injury).

The failure of the second first-person testimony was more interesting, calling into question whether Mack might have led the second soldier with the evidence she thought she had from the first (and from Dantana’s faulty interview). Apart from Dantana’s contribution, this revelation put most of the blame in Mack’s hands. Yes, as EP, she was the one who approved the story, but so did Charlie and Will. The more interesting idea is that she subconsciously did what Jerry Dantana consciously did- set herself up as having more support for the story than was really there. This was the key piece of human failure that made Mack (and thus Will’s) arc more interesting than if they’d just been able to admonish Dantana from their perch high on the mountain of untouchable journalistic integrity. The last piece of the puzzle to fall apart was the most pedestrian- Charlie’s source turns out to be the father of a former News Night employee who died after being fired and falling off the wagon. He planted misleading evidence with Charlie in hopes of bringing ACN down as revenge for firing his son. It’s petty and disproportional to the point of silliness and the one piece of the story that wasn’t up to the calibre of the rest.

The giant wave of Damnit that hit all at once reeks a little bit of whatever you’d call the opposite of Deus ex Machina, but I’m willing to forgive a little convenience because, for the most part, everything that comes to a head here was planted incredibly well. The conclusion that brings down the twitter evidence was actually voiced by Neal in what seemed like an unimportant moment of levity in the season’s fourth episode. A basketball obsession that seemed like a fun character point in “One Step Too Many” leads to Mack’s discovery of Dantana’s screwup (though it’s unsubtly explained/foreshadowed in a far-too-long scene between Mack and Will). Everything comes together like a perfect puzzle… except the timeline of Maggie’s haircut, that remains a mystery to me.

The episode’s final scenes reach the glorious conclusion that there is no way the good guys win this one, because the good guys screwed up right down the line, even though they’re the good guys. It’s a strong note for The Newsroom to hit, balancing its fundamental optimism about people with a smarter and more modern understanding of the fact that people sometimes don’t do life right. The effect is somewhat undermined by Leona Lansing’s uncharacteristic show of honorable defiance and subsequent refusal of Charlie, Will and Mack’s resignations (though the scene was both wonderfully written by Sorkin and excellently executed by Jane Fonda) but the stars had to stay on the show-within-the-show somehow and I said that Sorkin was modernizing, not that he’d changed personalities, you had to know that these characters were not going to be allowed a plea bargain (they will not dishonor themselves, their unit or the corps so they can go home in six months!*). Besides, even if they go to court and Dantana somehow loses the lawsuit he would likely never actually lose, the News Night crew are already paying dearly for crimes and misdemeanours. As Mack says, “no one will ever believe us again” and that, to these people, is a fate far worse than losing a lawsuit, their jobs, or anything else.

*It’s very important to me that you readers see A Few Good Men. I’ve quoted it about a half-dozen times in this article and I fear that it’s possible that you’re not getting the references and just think I’m crazy. Could you please go watch it now? It will really help clarify Sorkin’s work for you.