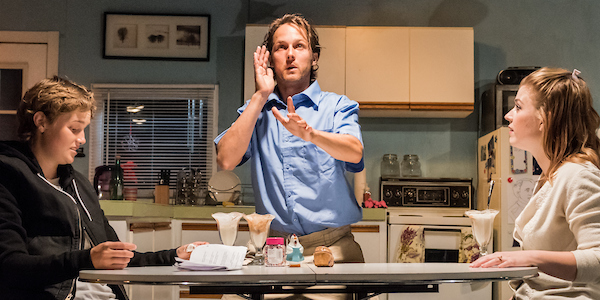 On Stage in TO: Indie Drama

Kill Your Parents in Viking, Alberta (Storefront Arts Initiative & Blood Pact Theatre)
A vibrant, fraught, fast-paced new tragi-comedy from playwrights Bryce Hodgson & Charlie Kerr, the oddly named Kill Your Parents in Viking, Alberta plays out in real-time in the kitchen of young mother Susan (Allie Dunbar, hilarious in her immovability) as she attempts to have a civil dinner with her estranged siblings who are in town to get her to sign their late grandma’s estate papers. This proves difficult because her outspoken sister Perry (an excellently infuriated Libby Osler) refuses to suffer fools and firmly believes her conservative sister (and the older man- Jimi Shlag’s bumbling Paul- who knocked her up and moved her to Alberta at 17) to be just that. Their brother Frank (Michael Eisner, perfectly cast for his uneasy vulnerability and charming oddball energy)- a sweet but troubled recovering addict who just got out of prison and insists on connecting everything to the movie The Crow– is no help. Rachel Cairns’ direction is quick, detailed and straightforward, exactly what’s demanded by Hodgson & Kerr’s tricky, trippy script with its spitfire, overlapping dialogue. Brutal fight choreography by Nate Bitton (of course) raises the stakes while Hodgson & Bri Proke’s hyper-realistic set design raises the production value. A last-minute twist adds unnecessary drama and opens a can of worms the play doesn’t have room to explore but the reason there’s no room is that there’s so much deliciously packed into a seemingly simple scene.

Old Times (Unit 102 Actor’s Company)
Toronto’s most consistent indie company is mid-crisis at the moment. Their theatre space is being turned into condos and they were given just a few weeks’ notice to pack up and leave the Dufferin & Queen location that’s been home to their productions for nearly 5 years. Most of their just-announced 2016/17 season has been put on hold indefinitely but this isn’t a company that caves to crisis so when their season-launching Pinter play found itself without a performance space after rehearsals were already under way, they just found somewhere else to do it. That somewhere else is a weird derelict room in a weird derelict building on Niagara street, the sort of place you have to work hard to find and are unlikely to return to. In this unideal last minute space, Unit 102 is doing their Unit 102 thing, unfazed, undeterred. Their production of Harold Pinter’s Old Times is, like almost everything I’ve seen Unit 102 do before it, a solid, challenging, rewarding modern drama. Director Scott Walker is boldly unafraid of silence, letting the tensions between married couple Deeley & Kate and troublemaking houseguest Anna sit and simmer in really effective ways. The three-person cast is very strong with the incredible Lauren Horejda once again stealing the show with a conflicted and complex performance that quietly denies the splashier characters their upstaging. Anne van Leeuwen is striking and enigmatic as the sort of woman with whom its impossible to have a simple relationship and Mark Paci shines in Deeley’s most explosive moments, though he needs to bring his volume down a bit in the quieter scenes to better fit the new, more intimate space. Pascal Labillois’ set doesn’t have the impact of the company’s usual builds but Steve Vargo’s lighting design does a lot with a little. Overall, Old Times is a welcome reassurance that Unit 102 will be fine. Close their venue, postpone their season, bring it on; they’ve got this.

Kingdom (Contra Theatre)
Playwright/star Meghan Greeley and MyTheatre Award winner David Ferry both deliver powerful performances in the Toronto premiere of Greeley’s one-act about Nora, a 16-year-old girl who’s lived almost her entire life held captive by a strange man she knows as “Sir”. Greeley’s script is at its best when it rests in her own hands and Ferry’s, the parts that lock Nora and her captor in a brutal psychological dance that shows him strategically dismantling her optimistic view of anything that he sees as a threat to their dystopian little “kingdom”. Annelise Hawrylak’s wacky imaginary friend character is unnecessary and distracting (if the fact that she doesn’t exist is a spoiler, it needs to be far less obvious). Silence in Sir’s absence would only add to the complexity of Nora’s psychological story and trim some much-needed time off the draggy script, focusing the play on the elements that already work incredibly well.