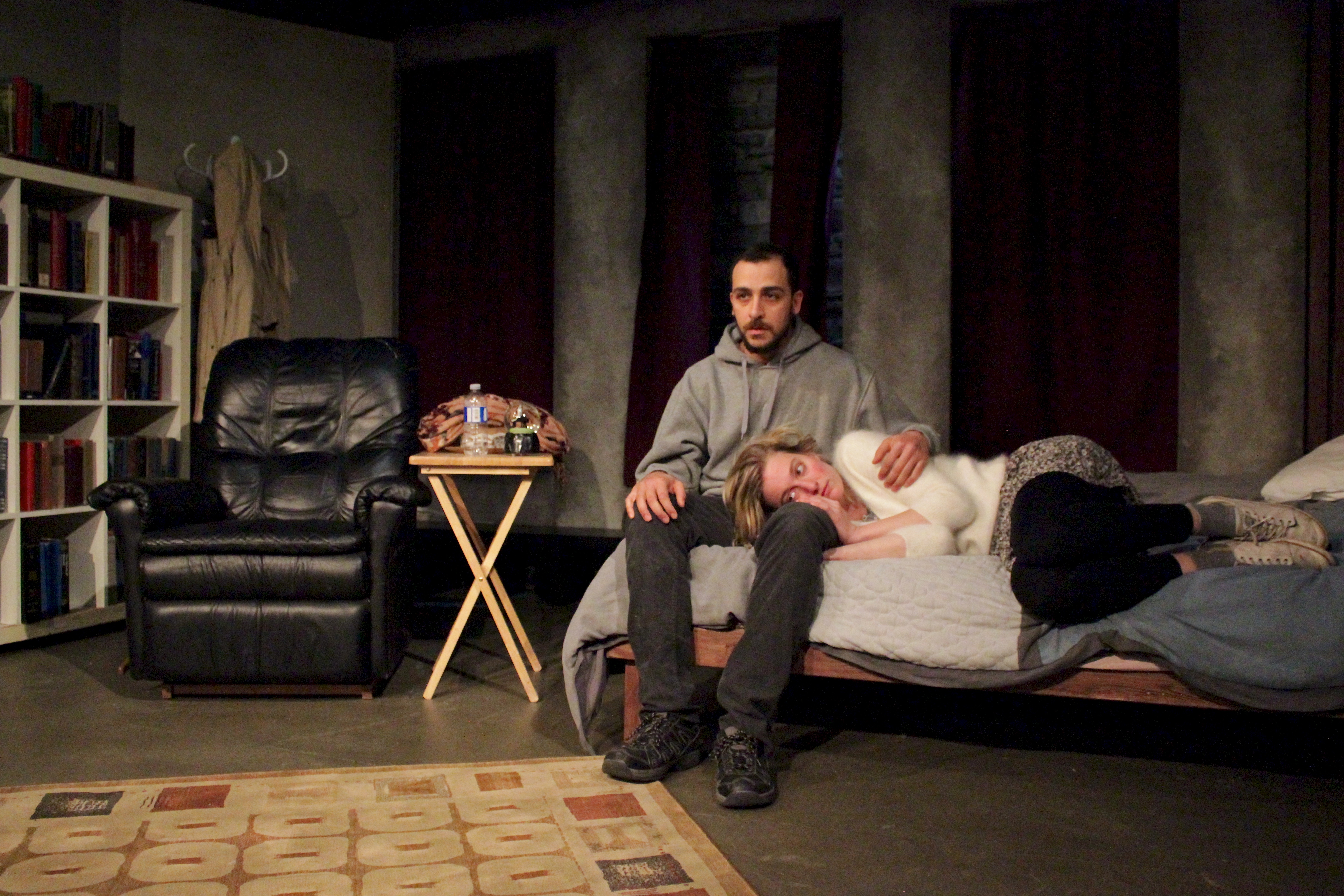 You walk into the hole-in-the-wall Unit 102 space and are met with literal red light (courtesy of Steve Vargo, the production’s lighting designer). It’s coming from a series of windows that line the back of the stage overlooking Pascal Labillois’ effectively dreary, detailed set- a shabby Amsterdam hotel room with two twin beds- one made, one messy. In two of the windows there are girls; miserable looking, very pretty girls, writhing dully but seductively to some atrocious techno, looking both determined and bored out of their minds. Omar Hady enters. He has none of the dazzle he so grinningly wore in last year’s Last Days of Judas Iscariot. He looks grey, exhausted, as if he’s collapsing in on himself. He removes his belt, loops it around a coat hook, fastens it around his neck and drops to the ground. The coat hook breaks from the wall and falls on top of him, a heap of grey material slouched on the dirty floor of an Amsterdam hotel room, technically unharmed, with a belt around his neck. It’s just about the most depressing scene anyone has ever set.

This, we will soon learn, is Matt (played with so much stirring sympathy by Hady that my heart felt tied to his for two and a half straight hours, and a few hours after that). He’s a brilliant, broken, unsuccessful young writer and the suffocating gloom director Anne van Leeuwen and her team so perfectly capture in this production is the life he’s reconciled himself to.

He’s soon joined onstage by Davis, a grandiloquent, frat-ish “friend” to whom Matt seems forever resigned to play sidekick. Played with great bombast and deep-seated discontentment by Luis Fernandes, Davis dances on a captivating line- sometimes a carefree wunderkind, sometimes a self-congratulatory blowhard; sometimes a well-meaning buddy with some fundamental goodness to him, sometimes a destructive, self-hating bully too selfish to deserve anything but the misery he so casually brings to others. For all his deeper disasters, Davis on the surface is fun, and funny- qualities that make him appear like a light in the darkness of Red Light Winter, a beacon that the audience, like Matt, can’t help but be drawn to even when we know it’s just an illusion.

The interplay between the two men as written by Adam Rapp and performed by Hady and Fernandes unspools a rich history and complex power dynamic that comes into even brighter focus when their comfortable routine of intellectual banter and passive aggressive competition is interrupted by the arrival of a mysterious French prostitute named Christina. Encircled with cigarette smoke and reflected through the eyes of the men who see and see through her, Chloe J Sullivan is a quiet revelation in the play’s most enigmatic role. Her accent work is excellent, as is her singing voice, but it’s her physicality that most beautifully communicates Christina’s well-shrouded reality. The way she tenses in the arms of one man and melts into the other, the self-consciousness of her posture in one scene but not another, whether her eyes are hopeful or empty, her hands active or calm, how a costume change emboldens or comforts or unsettles her.

Rapp’s beautifully composed and hauntingly complex play encounters these three characters twice, many months apart. When we first meet them, we see timidity, resignation, carelessness and connection. It’s a bleak world where disenchanted women dance in red-lit windows and young men attempt to hang themselves by their belts, but there may be hope in it yet; it is almost, at times, a romantic comedy (albeit less candy-coloured than they usually are). When the characters are reunited, we see regret, fear, the power of unconditional love and the particular ache of meaning nothing to someone who meant everything to you. There’s some comedy left but it’s mostly at the expense of others; there’s some romance left, but it’s too sorrowful to be romantic. That eerie redness that cast the play’s opening scene in a seedy light may be gone but what we’re left with instead is the darkest of blackouts.