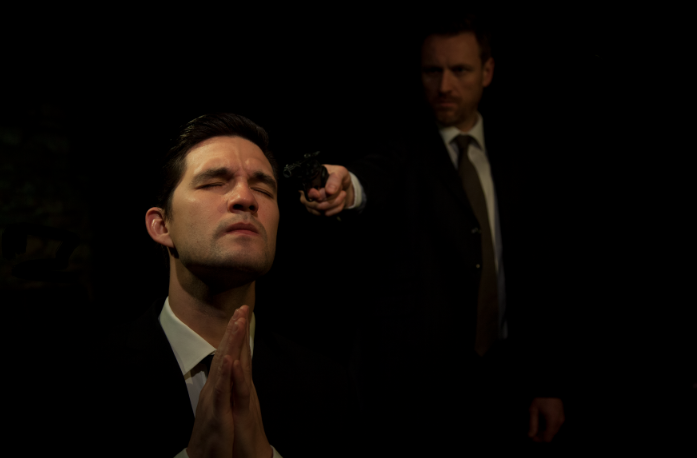 Clarity- of theme, of character, of purpose- is, to me, the greatest necessity in any Shakespeare production. Chances are the audience won’t follow every word of the script or even every beat of the story but if a production is thematically strong, has a solid sense of who each character is as a human being (not just as a literary icon) and has something to say about the play or something new to discover within it, then everything makes sense even if some beats get lost. This is what makes Unit 102 Actors Co. & The Fresh Mint Project’s Hamlet stand out in a sea of low-budget Shakespeare. Rather than letting his chosen aesthetic (film noir) swallow the production, director Jesse Ryder Hughes focuses on content over style and gets to the truth of who his characters are, why they behave as they do, and what’s really rotten in the state of Denmark. He does so in fresh ways with the help of strong actors who know what they’re saying and never let their fedoras tell a louder story than their voices.

Beyond the fedoras (both the actual hats and as a general representation of film noir style, which the cast rocks with great panache courtesy of some fantastic finds by costume designer Ashleigh Kasaboski) Hughes brings his cinematic point of view to two major decisions in his Hamlet. The first, unfortunately, is the ultimate faux-pas of blackout set changes. I’m going to give Hughes the benefit of the doubt here and imagine that this decision was a conscious one, meant to simulate film cuts Video Cabaret-style, but it just breaks up the action and adds to the runtime. The transitions are, at least, competently executed and fairly quick, so not all is lost. Far more daring (and effective) is the way Hughes uses the film and television trope of the cliffhanger in a new theatrical context, placing intermission in the middle of a scene with a dramatic blackout just as Hamlet aims a gun at the praying Claudius’ head. For the most part, though, the cinematic stylings are, just that, stylings and never interfere with the deeper story. Small but resonant details like the way Zach Smadu’s pointedly action-oriented Laertes has to be the one to reach out to hug his emotion-avoiding father amidst a sea of rambling advice, the thoughtful physicality of each romantic or sexual connection (both those traditionally played and some newly mined for this interpretation), subtle adjustments to Hamlet’s body language as his desperation deepens- these are the grounded directorial choices that most inform this Hamlet, regardless of the setting or style.

Arguably more than any other Shakespearean protagonist, however, it’s Hamlet himself who anchors the play and ultimately dictates its success or failure. Faced with the western canon’s preeminent icon, the naturalistic but intense Scott Walker does a wonderful job making the character feel fresh and his concerns immediate. A few mispronunciations aside, his handle on the language is strong enough that he’s able to mine meaning from even Hamlet’s most meandering poetry and his energetic stage presence holds the audience’s attention even in the play’s draggier bits. He’s matched by Kelly Van der Burg’s smartly underplayed Ophelia (though her madness goes a bit too far the other way) and, in the most interesting casting move of the production, a Claudius who appears younger than Hamlet himself. Jeff Irving is an intriguingly charming and calculated Claudius, well suited to the role despite his age and, at first, I assumed we were meant to suspend our disbelief and just appreciate Hughes’ refusal to miscast actors for purely aesthetic reasons. It very well could be that there was nothing more to it but, as the play went on, I began to see the dramatic potential in a Claudius and Hamlet who are of comparable (or even reversed) ages, emphasizing the heir apparent vs. second son power dynamic between King Hamlet and his much younger brother and also fuelling Hamlet’s anger at his mother not only for marrying his father’s brother but for taking a second husband who is barely older than her son (an interesting gender reversal of a familiar melodrama plot). Some potential from this fascinating new dynamic is left untapped, however, in the decision to play believable sexual chemistry between Irving’s young and dashing Claudius and Lynne Griffin’s older Gertrude. They look suitably mismatched but both actors commit to the idea of a real relationship with plenty of gratuitous PDA when a social climbing “faking it” angle might have made a lot more sense for Irving’s particular Claudius.

The production’s other most intriguing casting choices come in the form of a female Rosencrantz and Guildenstern, played as wicked society types by the rapturously fun and biting Lauren Horejda and Anne van Leeuwen respectively. Standout figures in this interpretation who steal much of the spotlight from the other female characters (including Chloe J Sullivan’s unmemorable Horatio), Horejda and van Leeuwen find a slew of new character points in the underwritten sidekicks (Rosencrantz’s hatred of the play-within-the-play is priceless) to the point where I’d love to see Unit 102 program Rosencrantz & Guildenstern Are Dead as their next venture, keeping this cast as much in tact as possible. Terence Duraisami’s entrancing player king in an expanded role would also be a welcome feature.

Hughes’ production isn’t perfect by any means. Polonius is a bit of a cartoon, the ghost of an Al Capone-y King Hamlet leaves little impression, and I never appreciate being left sitting in the dark while some stagehands move a couch. But Hughes gets it right where it counts. He’s managed to say something with his Hamlet through character-based choices both minuscule and daring, never once losing sight of what Hamlet is and who Hamlet is and why those things matter.

Hamlet plays until February 7th at The Theatre Machine (376 Dufferin).
Get your tickets HERE.