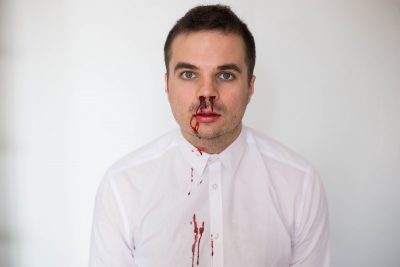 Situational Anarchy (A)
This was a very succesful SummerWorks and a lot of the credit for that goes to the vast array of excellent storytelling shows. Graham Isador’s evocative punk rock solo show is yet another strong showing in that category. Filled with rage and vulnerability, Situational Anarchy is a stirring ode to that time when we cared about something so much it’s a wonder we survived the enormity of our care.

Bleeders (A)
The most succesful musical of the festival, d’bi.young anitafrika’s dub opera Bleeders is an epic part of a larger epic (it’s part three of her Orisha Trilogy). The vibrant ensemble weaves through the waiting crowd in the Theatre Centre lobby with a rousing opening number protesting the Pickering nuclear plant then herds the audience to their seats. Among the many strong voices, assistant director/choreographer Nickeshia Garrick stands out as the vocal powerhouse. A culturally rich story that is at once a historical monument and a cautionary tale, Bleeders makes a big thematic impact while pushing the boundaries of musical theatre convention as we get lost in Waleed Abdulhamid’s infectious melodies.

Tomorrow’s Child (A-)
Created by Mathew Waddell, Eric Rose and David van Belle, Tomorrow’s Child is a shatteringly effective immersive experience that elevates the concept of a radio play to make the blindfolded audience feel like they’ve been dropped into the middle of Ray Bradbury’s short story Tomorrow’s Child. The lack of live elements is somewhat disappointing and the script itself could use more clarity but the technical accomplishment of the sound design is simply unbelievable. It’s a terrifying, riveting piece that will test your trust and startle your senses.

My Nightmares Wear White (B+)
Grace Thompson’s story of the mysterious sickness that confined her to her bed for months on end is horrifying. Supported by a silent but hilarious Maddie Bautista as the myriad of friends, family, doctors and holistic health practitioners who try and fail to help her, Thompson (who voices all those parts in addition to narrating her story) evokes a palpable feeling of hopelessness and confusion that makes her storytelling show an emotional gutpunch.

Empire of Night (B)
The following things make it very hard for me to sleep: the company of strangers, the knowledge that there are others in the room who are definitely awake, the feeling that I’m taking up too much space, the feeling that I’ll be disturbing someone if I move/make a noise, the possibility that I’ll miss something interesting if I sleep. All these factors (plus “Uptown Funk” leaking in from the venue upstairs) being present, it was unlikely that I would sleep at all during Bad New Days’ 7-hour experimental sleepover (I think I got about 90 minutes at the end) but to stay awake fully paying attention wasn’t quite the right answer either. Had I dozed and missed Alex Samaras’ ethereal vocal performance, Joey Eddy’s on-pointe dream dance, or creator/director Adam Paolozza’s amusingly scream-interrupted French reading, I would have been gravely disappointed. But staying awake meant at least an hour of a techno dance party that never really caught on and an impressive but largely uninteresting guitar solo that seemed to never end (my conception of time disappeared almost completely in the dark Drake Underground but it had to be at least 40 minutes). There were a lot of cool ideas that went into this one-night-only event but it felt a little under-cooked, certainly under-explained. I’d love to know the research that went into how the piece followed the “biological rhythms that make up a good night’s sleep” (as the program description suggests), the choices of what happened when and what effect each segment was supposed to have on the participants. I must have fallen asleep because the promised “jubilant celebration of the dawn” was, in my experience, an abrupt turning on of the lights and an invitation to go for scones. Much as I love scones, the harsh ending felt like an inappropriate sendoff when what made the strange but often beautiful preceding hours most remarkable was the feeling of it being something we happy, tired few got through together.

This is the August (C-)
The performances in this clunky, obvious drama about Instagram-era social issues are as wooden as the characters are simplistic. Conflicting generational views on feminism, gender and trans politics, sexual assault, objectification, freedom of expression, privacy, cultural appropriation, arts funding- it all makes a jumbled appearance in a vague voicing of consensus liberal opinions wrapped in a forced story about a severely awkward love triangle. These issues deserve better.