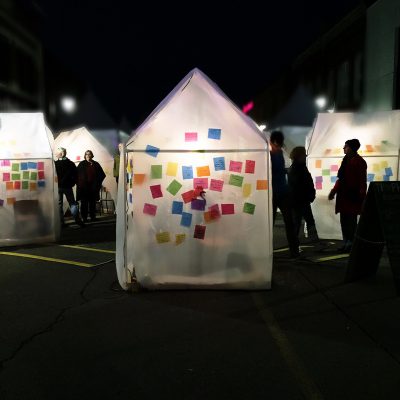 Trophy (A-)
Creators Sarah Conn and Allison O’Connor have brought to life an interactive installation piece centred around stories of struggle and change. The audience is split up and circulates through five tents, each of which holds a person waiting to tell us a personal story of transformation. After they recount their story, we are asked to think of a story in our own lives that relates to what we’ve heard, to write it down on a coloured light gel, and to pin it to the lamp at the top of each tent. Each storyteller is distinct, and is telling a personal story from their own lives, one that they are obviously deeply emotionally connected to. As they each reveal such personal details about their lives the result is disarming, creating a kind of fast intimacy between performer and audience. At first I thought we were going to have to tell our own story, but we are only asked to write something down, which is less stressful in the moment but in another way feels sort of disappointing. The experience felt very dense, and I was glad I was there with someone, and afterwards we shared the stories we had thought of with each other.

[decoherence]/performing performance (B+)
These shows are two pieces presented together separated by an intermission. [decoherence], choreographed and performed by Jessie Garon and Jarrett Siddall, was inspired by Einstein’s quantum entanglement in which the quantum state of particles cannot be described independently of the whole. If one particle is affected in a particular way, the other, even if it is on the other end of the universe, will be affected in the same way. This dance is both hypnotic and rousing at different moments as the two dancers fall smoothly in line with each other or when they run to and from each other, using their thick black boots to create rhythm and vibration throughout the dance. Garon and Siddall are obviously very talented, though I think I would have found the quantum entanglement theme more interesting if they hadn’t just moved in tandem but had found ways of including elements external from the dance in ways that played more with ideas of affect and reaction.

Performing performance is about a different kind of materiality: it’s a conceptual dance performance exploring the ways in which attention and focus both affect and are affected by one’s concrete surroundings. Ellen Furey begins on a huge sheet delineating her space, the space of someone who clearly seems like a compulsive collector with piles of possessions stacked on all sides. She begins by bringing a bunch of her belongings out into the audience, giving a few things away and then making gestures that we should distribute these things amongst ourselves. Furey then begins her piece, which is a very delicately choreographed version of a very awkward and child-like hoarder, who is both easily distracted by her own possessions and yet eager to share some sort of experience with the audience. A lot of the dance pieces at Summerworks this year seem to be driven by concerns with temporality and this one is not different. There were moments when Furey would be focusing on something to the point where I would start to wonder what she was going to do with it, only for her to drop that and move on. Despite this, the piece isn’t boring, and in fact at times was extremely funny.

Aattitle (B)
Choreographed and performed by Simon Portigal, this is an experimental dance performance designed to ‘forge soft weapons of alienation.’ Portigal begins lying on the ground in the middle of the audience who are circled around him, initiating with his breath a very strange and bodily journey for the next hour. Between breathing, movement, music, flashing lights and words projected on the wall in choppy sequences, Portigal brings the audience with him on what at times feels like an acid trip. Time goes fast at some points and slows right now at others, as we become intimately engaged with Portigal’s journey, a journey that is almost intimate in its alienation, and by the time the performance is over you feel like you have all undergone a very personal experience, a feeling that becomes evident as the lights come back on and Portigal sits back in an audience chair, looking at us all and shrugging his shoulders as the audience laughs nervously. The performance was effective in that it created both alienation (I thought I might have an anxiety attack at the beginning and have to leave, but I managed to push through) and intimacy, since witnessing his transformations creates a sense of care, as we’re aware that we are watching something both strange and deeply personal. The piece walks a line between pushing boundaries and expectations but not going so far that we aren’t inclined to keep watching. At one point, words are projected onto the back wall for the audience to read, deliberately choppy and creating a sense of frustration. It seemed like it was extracted from a text on critical theory, and I wonder if that part might have been more powerful if the words were more personal rather than political.

Maylee Todd and La-Nai Gabriel’s “Inamorata” (B-)
This performance is recording of Maylee Todd’s third album with an all-women band musically arranged by La-Nai Gabriel. The band plays as Todd comes center stage to stand behind her costume: a white dress onto which various images are projected, mostly flowers but also underwater, clouds, and fireworks. She sings, stationary, for an hour as they move through the songs on her album. The result is very pretty, like her songs, and everyone involved is obviously a very talented musician. I am a bit confused Todd’s choice to stay in the centre of the stage, though, since her movements were often static poses instead of motivated by the emotions of the song. The projections made up for some of this, but even though they were pretty they were a bit clichéd. I wonder if Todd had been free to move around the stage if the performance would have felt like it had a bit more of a natural energy, allowing the audience to connect a bit more with her songs.

Osia (B-)
Osia is the story of a Ghanaian family hoping for a better future but who also have a lot of reckoning to do with demons in their past and present. Written by first time playwright Jijo Quayson, the play has potential. It’s addressing something that isn’t unique to a specific family but pervasive problems of abuse and dependence and trust and betrayal. The question I had after watching it though, was what does this play tells us about abuse? I think the answer to that needs to be found somewhere in the climax, which is currently a bit awkward in its big reveal, since it’s unlikely that an abuser would admit that readily to committing a crime. I did like that the play demonstrated his complicated rationalizations, but it seems like those rationalizations need to be brought out more, showing the irony between how he sees his actions versus how we see them. The acting overall is good, if a bit under-rehearsed. Nicole Nwokolo does a good job as Osia, though some of the impressionistic young gestures might have been even more powerful if she’d pulled back on them a bit. This play is still a work in progress, but it’s definitely worth checking out.