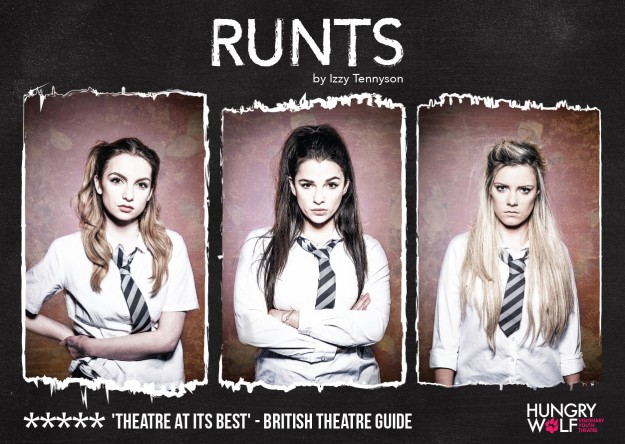 Runts
School can be rough, but one can hope it’s never as rough as it is in Runts. Set in an English state school, it tells the story of a class of girls in a school filled with bullies, uncertainty and cat fights. It depicts the kind of school many parents dread because children don’t feel safe when they leave in the morning. This is an emotionally wrenching play, but it depicts the sad reality that many teenage girls must face. Each actress plays her role very well. From the discouraged teacher trying to get everyone involved to the new girl who insists she isn’t “posh”, everyone’s character brings her part to the play. The girls’ lives seem to be controlled by Stacey, a manipulative girl eventually taken out of class to go to a mental hospital. She is supposed to stay home but she doesn’t. She has the control and wants to keep it that way. With themes of friendship, sexuality, fear and depression, Runts is not suited for the overly sensitive. For an excellent performance about the struggle of teenage girls, it is worth seeing.

Nuns
Nuns is about sinful Catholic sisters. It is a truly entertaining performance despite the minor lighting glitches. Sex, drugs and rock’n’roll in a convent—it feels like a call to the Catholic Church to reform the system in a humorous way. Sex tapes, vodka, fetishes…this performance has it all but, thankfully, it is not as crude as one would expect. It does have erotic jokes and some form of innuendo, but it comes off as rather playful. For those who cannot bear the idea of sensuality on stage, this is not a show to see. The cast has great chemistry and a lot of fun on stage. Spectators can sense this. At the start, it seems like some bizarre fringe play with mediocre actors and poor mise en scène. This does not last long, and pretty soon everyone is chuckling.

Mr Jordan’s Funeral
Weird does not even begin to describe this production. No one finds out who Mr. Jordan is and how he died. If there is some sort of double meaning in the incomprehensible script, it is not clear. It starts out with a pile of clothes on the floor. Little by little, all of the actresses, dressed in black shorts and a black bra, go on stage to try on the clothes. They fall over each other and suddenly they stop as the more sensible of the lot motions them to come forward and put on black dresses. Why? It is not clear. Foxtale theatre prides itself on presenting “messy pieces of theatre to audiences” and they do so beautifully. The trouble is that even messy plays need a sense of understanding at the end of the performance. From the women hugging confetti paper to the random scenes of dance, there is not one bit of Mr Jordan’s Funeral that makes sense. If that is the point, it has succeeded. Why is that the point? Audiences cannot quite tell.