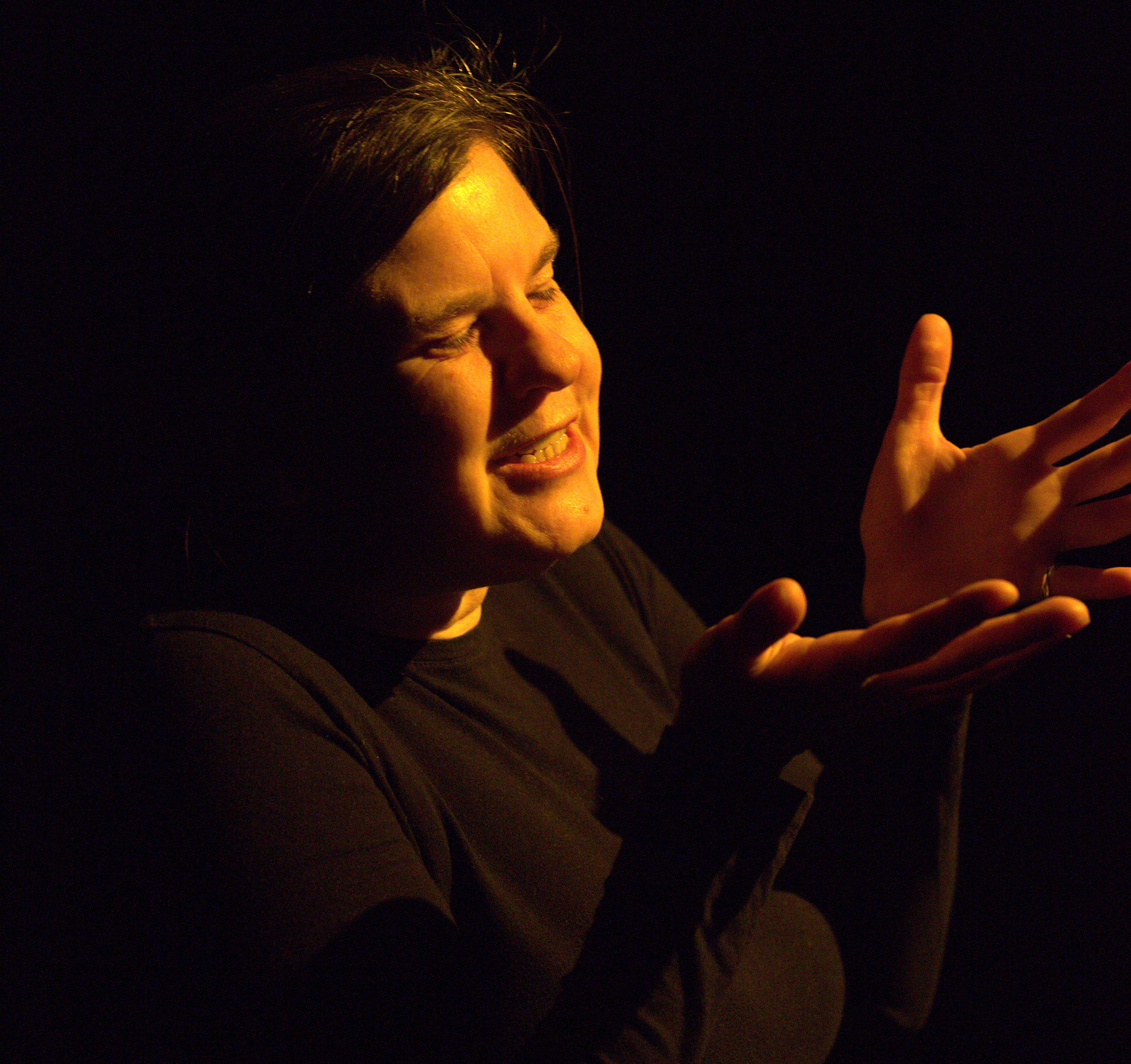 A Thousand Kindnesses (A-)
Award-winning Scottish theatre practitioner Rachel Jury created an hour-long one-woman show based, the Fringe site declares, on ‘interviews with people who have escaped conflict’. Jury stands alone in the centre of the stage, wearing all black, and migrates from character to character to tell many different stories of conflict and strife and, ultimately, kindness and collaboration. It seems as though many of the characters were immigrants to the UK, a timely topic in light of last week’s Brexit referendum, especially as the show demonstrates so many aspects of kindness: when can be abused or manipulated, the people who are kind versus those who merely think they are, the ways kindness manifests in the simple act of listening, and the ways in which it brings people together and even brings them into themselves. Jury’s characterization is exceptional, and the character shifts are clear. We were left, however, without a sense of how these people are connected, if at all, beyond the theme of the show, and some more contextualizing might help soothe that confusion and allow the audience to be more easily absorbed into Jury’s excellent storytelling.

Saor (Free) (B+)
Written and performed by Carlyn Rhamey, Saor (Free) is a show that details the problems with Carlyn’s life, and the journeys, both geographical and emotional, that she goes on to figure out who she is and where she needs to be. Rhamey is charming and self-deprecating and absolutely hilarious: I was literally guffawing throughout the whole show. Rhamey is one of those comedic actors who manages to hit the sweet spot where she can expose her flaws and vulnerabilities but in doing so shows an amazing strength and confidence, and is an absolute delight to watch. Even her Irish accent isn’t bad (though the Scottish one could use some work). I would like to see the final revelation of the show reflected in the stakes from the start: in other words, it would help audience if the depth of her initial frustration were more spelled out. But definitely a great one to catch!

Self-Exile (B)
Nisha Coleman’s one-person show recounts her story of growing up poor in small town Ontario the eldest child in a family with an emotionally and physically abusive alcoholic father. In her attempt to subvert abuse, Coleman learns how to blend into her environment so well as to make herself invisible, even to herself, to the extent that coming back from that is even harder than it was to get there. Coleman’s show is entertaining and engaging, and she has a very riveting stage presence and good comedic intuition. The performance itself is good but could use a tiny bit of polishing to make it stellar – if she slowed down some of the miming and her impressions of other characters that would help paint a more vivid picture. I also want her to dwell a bit more in the darker places, like the scene at the campsite with her father. This is a turning point in the show and could be dug into a bit deeper, helping to carve out the arc of the narrative more robustly. Finally, she could take a bit more time with the culmination of the plot – it isn’t clear to me, in particular, where the shift towards the very end comes from – what allows her to sit in herself in a different way, what motivates that change? Regardless, this show is a great one to see!

Wild/Society (B-)
Mika Laulainen and Melissa Oei perform Laulainen’s farcical take on current social and political conflicts. Rabbit moves to the city to escape the entrapments of the country but finds new ones in the city, especially when Racoon shows up and threatens to embarrass Rabbit in front of her new city friends. Then, two penguins in tuxes snort coke and pun wittily about wall street crashes and global warming. The puns are fun, and the show is short and whimsical and Laulainen and Oei have great energy as they work as a team in both competition and collaboration. The show might be a nice palette cleanser between some of the heavier fare, though I did find myself wondering, amidst the jokes and gags, what I should be getting from this that I haven’t seen before.

Collapse (C-)
Written and performed by comedian Ryan Dillon, Collapse outlines Dillon’s take on the reasons that he one day found himself on the ground after a panic attack outside a subway station. He begins in his childhood and recounts stories detailing moments he felt embarrassed, bullied, or unfairly maligned by other kids and at times one or two angry adults, and how that influenced the person he grew up to be.

This production falls a bit flat for me (no pun intended). The show’s description claims that it’s about how you cannot please everyone, and while this is a kind of clichéd truth (especially, as Dillon rightly points out, for those of us who have worked in the customer service industry) the show stays resolutely on the surface of that cliché. While Dillon seems to have the seed of something worthwhile here – for example, there’s a scene where he reveals the moment he sold out another kid to gain a modicum of popularity – he veers away from delving into its depths, which seems to me to be where the heart of this show really is. Why does popular opinion matter so much to Dillon, even to this day? What kind of insecurity lies behind that, and where can he find the vulnerability and the truth and the humour in that? That’s the show I want to see. As it is, Dillon rushes a bit nervously over the stories he is telling – he would do well to slow down his speech a bit, and to avoid swallowing so many of his punch lines, and let certain awkward moments have a bit more space so that becomes less about him telling the audience about what’s happening but rather showing it to us and letting us feel it along with him.