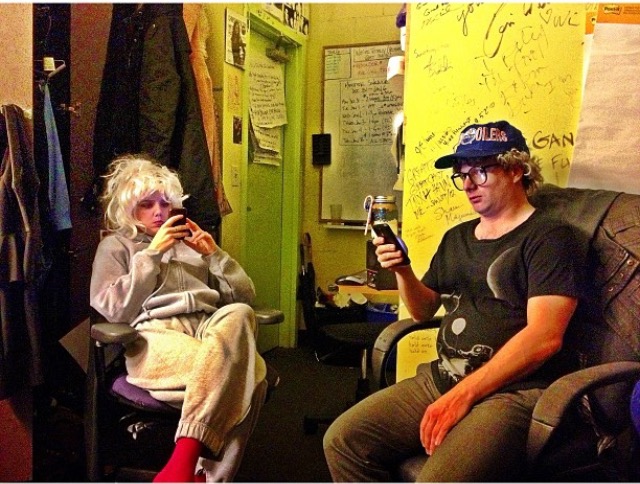 Tonight’s Cancelled (B+)
Tonight’s Cancelled is a well-performed sketch show by Torontonian comedy darlings Stacey McGunnigle and Jason Derosse. Not being a local, I’m not hugely aware of the theatre scene in Toronto so to walk into a packed house is a good sign. We are introduced to the two by a series of statements beginning in career highlights dissolving into awkward truths. Ok, these people are proud train wrecks. I can get on board. There’s a polished looseness to the sketches and the crowd lapped up the pair’s chemistry. The punchlines didn’t always land with the explosive laugh you’d hope for and revisiting the same scenarios didn’t always build on the funnies but there is so much to admire in the duo’s showmanship and writing. Definitely worth a look.

Little Pricks (B)
Little Pricks is a misleading title, referring to needles and not what I initially thought. This show is a touching and detailed recount of a woman finding out she has Multiple Sclerosis. It’s impossible not to sympathise with our storyteller, Denise Norman. She is so warm and articulate and you can’t help but imagine being as helpless and frustrated as her as she takes herself to the hospital, and whilst ill, has to deal with cold and unsympathetic doctors. I’m sure many people can relate, I know I can. Norman is an ex-dancer and a voice coach. No surprises there, she’s so at ease on stage and every moment is incredibly connected to her audience. These were my favourite moments, when she spoke directly to us and I found myself less interested in the moments when she interacted with the dancers. Three sprite-like young women who switch between different doctors and authoritative figures. Their physicality is impressive and they were very funny but ultimately didn’t quite fit with the tone of the other sections.

God Of Carnage (C-)
Two married couples are meeting to discuss a violent altercation between their young sons. What should follow is a power struggle between the couples, the men, the women and within the marriages. God of Carnage is a Tony award-winning play by Yasmina Reza translated to english by Christopher Hampton. This production is performed for the Fringe by Halo Productions and doesn’t live up to the play’s reputation. There are moments of gold in this show, largely due to the impressive script but there is a lot that falls flat. What dramatic tension there is is forced and quickly fizzles out from moment to moment. The dynamic between the four actors is unbelievable and the show ultimately lacks subtext. The crowd and I still managed to laugh at several moments so not all is lost.