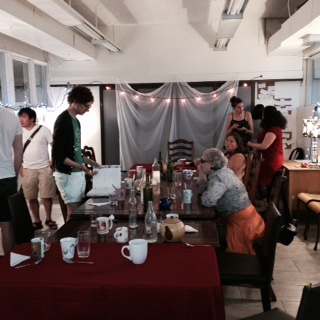 The Dinner Table (A+)
The last show I saw at the Fringe was also the best show I saw at the Fringe and it was really great to end the festival on such a high note. The Dinner Table is a beautifully curated meal by Ben Hayward and Ali Richardson of Fail Better Theatre. They manage not only to break conventional theatre conventions but to depart from the expectations and devices that can sometimes mark even site-specific or environmental theatre. A total of 12 guests, including myself, are entertained beginning with Hayward’s heartfelt explanation of his personal relationship to food. With the help of two assistants, our host Richardson warmly invites us to make ourselves at home here. We are invited to “get up”, “take pictures”, or “take calls” if need be. The company’s title begins to make total sense: how many performance traditions can we throw out the window?! Richardson invokes memories of her native Nova Scotia. To assist her touching narration, she shows us pictures. Of course, we each get a chance to introduce ourselves too.

I learn that each night features a different storyteller at the head of the table. From the likes of Sky Gilbert and Judith Thompson, had I known, I would have been sure to come “home” for dinner more often. But I am delighted that tonight’s storyteller is Cole Alvis who I have come to really respect. He delves into his family history, captivating us with stories about his unique relationship to each of his grandparents and parents.

The storytellers have each chosen a picture that represents home for them and these are strung against the wall of our makeshift dining room (in the basement of 918 Bathurst). Further, we are invited to write what we feel would be the title of our very own great story. All in all, the original and engaging form of this dinner was nothing short of inspiring. And judging by the big smiles and satisfied appetites of the others, I was not the only one. Personally, I want to examine my relationship with food more and explore my connection to home. Artistically, it makes traditional theatre that much more difficult to stomach.

Duotang Chesterfield’s Mystery Theatre Live (A)
Genres collide in one of the most enjoyable experiences of this year’s festival. A wonderful cast of seven performers brings to life a series of dynamic radio plays. I was really impressed at how each performer constructed a character who was completely authentic from the rest, complete with unique costume and mannerisms. Further, the actors switch from the characters they are playing into the characters they are voicing on radio with sheer fluidity and pizazz

The variety of props used to simulate the on-air sounds that a radio listener would be exposed to, topped off with old-school mikes, are not only visually interesting and well staged, but insights into the process of voice-over artists. Overall, a wonderful show. And for those of you who are starting to feel nostalgic, the self-titled company’s radio plays are actually available online via a podcast.

Lockeye & Pond in Death Killing Machine (A-)
Reid Brackenbury has created a rollercoaster cat & mouse Bond chase, skillfully weaving together every recognizable 007 trope possible. It’s impossible to get bored at this show, each vignette getting increasingly wild and funny. Pond and his arch-nemesis, Lockeye, eventually get so bored of trying to outsmart each other that they become close friends, and even consider dabbling in an encounter of the romantic kind.

Much longer than it needed to be, a lot of the scenarios begin to feel repetitive three quarters into the show. How many times can you use an explosive to blow something up? However, unlike a lot of shows at this festival, the talented company gave it their all, never loosing speed, no matter how outrageous or physical the scene became.

Everyone Loves Sea Land (B-)
An over-the-top comedic musical illuminating the lives of marine theme park workers. Not what I was expecting. Ethical concerns behind whales in captivity appear to be placed on the backburner as the dancers compete for attention and an orca trainer aspires to gain fame. For such a zany show, I found the caliber of singing and performance to be rather high. But I needed a few hints of urgency in the script in order to stay truly engaged. There is a potentially huge responsibility in dealing with something like animal abuse. And having learnt that Marineland actually threatened legal action after disapproving of the show’s original title which exchanged Sea Land for Marineland, I expected to learn more on such a controversial subject.

Stylistically, the show lacked focus too. And it’s not that I dislike satire. It just doesn’t seem to commit to it. At times, the music and dancing are extremely camp, at times melodic. The songs, while performed well, are not catchy. And they often don’t seem to move the plot forward. Most captivating, though, are the strong female characters. PR executive Sloane (Maren Sigson) who will do anything to make money, no matter the cost, and activist Krystal (Gillian Bartolucci) who cares as much about women’s rights as she does animal rights, are fully committed to their characters throughout.