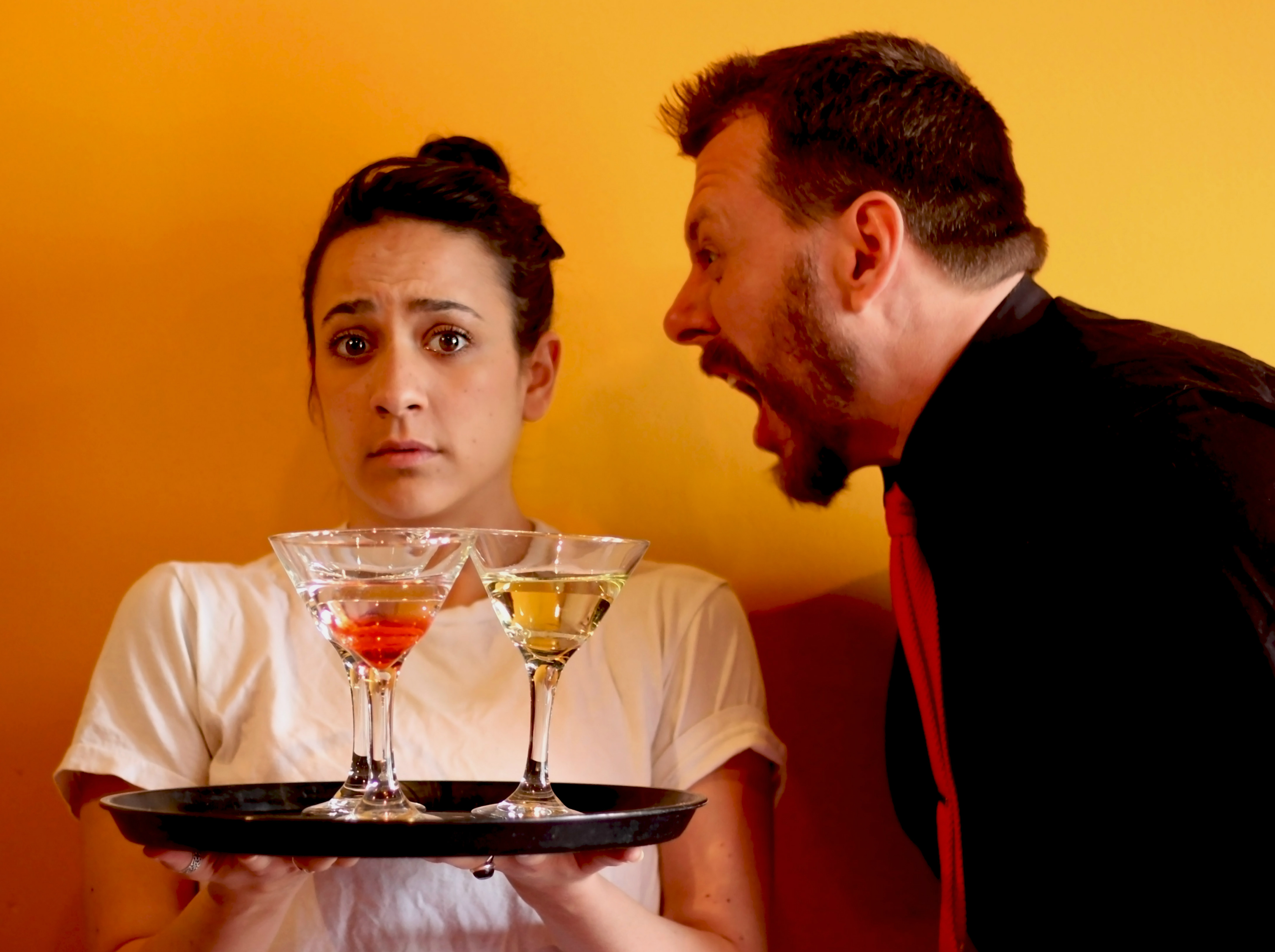 Served (A-)
Staged upstairs at the Epicure Café, this site-specific lamentation of a life in the service industry is filled with regret and entitlement, misplaced optimism and contemporary hopelessness. It’s self-aware of its own whininess (a refreshing change for this year’s Fringe) and highlighted by its conflicting perspectives- Jillian Welsh and En Lai Mah shine as endearing young servers with opposing points of view on their lot in life; Ron Kelly is less natural as their manager though Graham Isador’s script affords him an interesting mix of infuriating power grabs and misunderstood humanity. Planted in the table-seated audience is Glyn Bowerman who steals the show in his few brief scenes as a variety of disgruntled customers and a few audience members are pulled into the action as an unwelcome old acquaintance, a customer celebrating a birthday, and (most effectively) the other side of a very public fight Bowerman brilliantly conducts with his unsuspecting table-mate. There are some sightline issues and few particularly new conclusions drawn but Served is at once one of the more unique Fringe experiences this year and one of the festival’s best new plays.

Sizzle & Spin (B)
Two charming leads are the secret to a decent romantic comedy, everybody knows that, and two charming leads are exactly what make this formulaic play work as a likeable but hopelessly standard romantic comedy. Jonathon Lovett and Lena Maripu are an endearing pair with plenty of chemistry and the somewhat unique ability to make their characters feel somewhat unique despite being generic rom-com leads. There are multiple moments when you get the sense that playwright Sandra Cardinal really wanted to write A Man Walks Into a Bar (one of the most complicated assessments of gender relations the festival has ever seen; read Lauren’s review HERE) but instead she wrote Sizzle & Spin, which is sweet and charming and there’s absolutely nothing wrong with it but it’s definitely not A Man Walks Into a Bar.

Exposure (B-)
This cute but forgettable period play about the first photograph to capture human life (mysteriously billed as “the first selfie”, which is just wrong) is well but not excellently executed, leaving one with a lasting impression as fuzzy as that first photo. Playwright John Lazarus is clever in his carefully constructed imagining of the photographer and his subjects, leading to an excellent payoff when the photo in question is finally revealed, but there’s a bit too much happy coincidence for the story to ring true.

Quarter Life Crisis The Musical (B-)
This cute but pedestrian coming-of-age musical benefits from a dependable leading lady (Jada Rifkin), her natural and engaging chemistry with her principal love interest (Dalton Bolton) and a few catchy songs. Lyricist Jennifer Turliuk can’t seem to decide on a level of edginess (cheesy/sweet dominates most of the show with random spurts of disturbingly explicit sexuality throughout), an abrupt attempt at serious drama about two thirds of the way through feels distinctly at odds with the trivial feel of the rest of the production and Turliuk throws into the book a few too many issues that distract from the lead character’s journey (this girl would definitely fall for her therapist but we absolutely do not need so much insight into his struggle with loving her back). Focus and editing are desperately needed but Quarter Life Crisis is occasionally lovely even in its utter mediocrity.

Johnny Legdick, a Rock Opera (C+)
This whole musical is one joke. There are a few other gags littered in there but, really, the premise is the joke and the joke is only as funny as you personally consider dick jokes to be. The whole thing is silly nonsense, but it knows it’s silly nonsense and self-awareness is a wildly underrated quality at the Fringe (how many shows think they’re high art that are absolutely ridiculous?). Johnny Legdick is just supposed to be fun, so it is. I mean, I didn’t have that much fun, but I’m not the target market here. There are a few decent songs and leading man Colin MacDonald has one of the best voices at the festival. It’s stupid, but it’s not bad.

OverTime (D)
Alright, here it is, the one truly awful show I saw all Fringe. This overly long, self-indulgent drama by Romeo Ciolfi features stilted acting, blackout set changes, and every single one of the following things: long lost family members, OCD, racial tension, awkward oedipal undertones, hockey metaphors, MS, running metaphors, survivor’s guilt, something that doesn’t not resemble Stockholm syndrome and an attempt at examining the struggle of the artistic genius (I guess). Good grief.