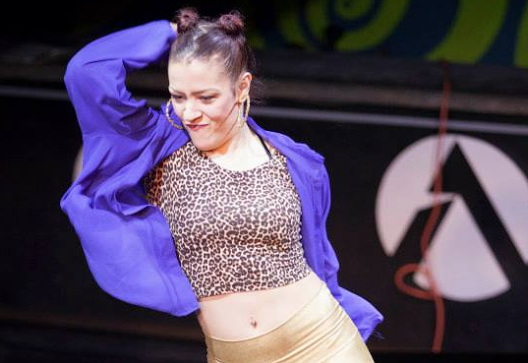 Urban Legends (A-)
In the last 24 hours I have inadvertently sat through four consecutive dance shows at the Fringe. While not exactly the way I would have arranged things had I realized just what it was I was scheduling, it hasn’t been a gruelling experience, since its allowed for an intriguing glimpse into the many ways such pieces can be conceived and presented. The first three that I saw all possessed a thematic or narrative thorough line, but Breakin’ Ground’s Urban Legends at the Tarragon Mainspace mostly acts as a showcase for seven highly imaginative choreographers and their exuberant, talented performers, and is, no disrespect to thematic coherency, by far the most purely entertaining of the dance pieces that I’ve seen so far. Curated by Deanne Kearney and emceed with extreme charisma by Amadeus “Primal” Marquez, who himself choreographs and takes part in the final and most message-heavy Krump piece, the programme consists of five group pieces and two solo works collectively showing off six different styles of hip-hop dance (Waacking, Breaking, House, Popping, Locking and Krump). All are swift, energetic and for the most part tightly executed examples of their respective forms, arranged in such a way so that a slightly more contemplative piece is generally followed up by a vivacious and fun effort, though to be fair all six sequences had the audience whooping and cheering at various moments.

Despite suggesting earlier that there is no narrative thorough line, it should be noted that most of the pieces feature a simple story that develops amidst the sharp moves. There really isn’t weak entry in the bunch, but worth special mention are Caitlyn “Caddy” Superville’s all-female dance club set piece, “Party at the Discotheque (Waacking)” which was slick and fun in equal measure, and Dora Award-winner Caroline “Lady C” Fraser’s “Body Talk (Locking)”, performed in a red pimp hat and with masterful style by the Lady herself, aided by some effectively moody lighting by Kyle Morton. Speaking of lighting, some of the cues could be a bit sharper in places, and there are a few sequences which are too underlit, leaving some of the dancers on the outer rim of the Tarragon stage in shadow. This is a minor quibble though – – Urban Legends more than succeeds in showing off its large and electric cast.

Me With You (A-)
A delicate and sensitively wrought work about mental illness that gains power as it goes along, this collaboratively produced work by Looseleaf Theatre and CAMH (who will receive all profits from the show)’s production yields deep emotional resonance out of a seemingly low-key premise. Twenty-nine year-old Granger (Oliver Georgiou) has returned to Toronto to stay with his elder sister Sophie (Myrthin Stagg) in the hopes of gaining some employment. He appears to suffer from an intense form of clinical depression that has hindered, amongst other things, his professional life and his relationship with his family. Sophie is extremely wary of his even staying with her, and when Granger turns out to be a sloppy houseguest and, more importantly, falls back into old patterns of lying, she feels vindicated in her doubts, causing the the two to have an intense showdown in the powerful final sequence. The show’s creators have realized the psychological struggles and battles of both characters by filling the stage with fifteen or so cardboard boxes, which are moved around at various points of the performance. Initially these boxes feel a touch gimmicky and literal as a means of expressing the characters’ psyches, but they end up being effectively and confidently used in ways that enrich the intimate and focused story. Intense dance interludes (choreographed vibrantly by Brittany LaRusic, with the use of an extremely effective, solitary spotlight that shines from the back of the stage) feature Georgiou throwing himself across the stage in articulations of his psychological torment, and forging various structures with the boxes (a precarious tower when things are becoming increasingly tenuous between he and Sophie, a couch, and an obstacle that stands between the two siblings). These dances are scored by Elliott Loran’s live accompaniment, who, when he isn’t producing wild and jazzy riffs on an upstage drum set and keyboard, sits in silence, acting as a watchful spectre to the proceedings.

Apparently the piece, credited to Georgiou and Stagg (who are both strong in the play), was developed from interviews conducted with individuals willing to discuss their mental illnesses and its effect both on themselves and their loved ones. The script however rarely feels sewn together from different parts, or inorganic in its depiction of this particular sibling dynamic (Sophie’s detachment seemed unusually unsympathetic to me, but it made more sense as it became clearer just how worn down she had become by Granger’s behaviours). Granger’s line “I think that if I can control what people know, then I can control their expectations” is such a clear and illuminating description of both his anxieties and their ramifications, yet feels totally in keeping with the drama at hand, reminiscent of a line from Sarah Kane. Like her plays, Me With You offers tough emotional clarity, but diverges from those works’ more foreboding conclusions by ending on a note of genuine optimism.

Skunkweed (B)
A change of pace from many of the Fringe plays that I have so far seen, Adam Bailey’s production of Eric Bogosian’s Skunkweed puts a relatively new American play onstage, with mixed results. Jerry (Chris Witby) is a married TV writer with a shocking tendency towards narcissism and depression who, as the play begins, has just met Jo-Ellen (Melanie Pyne) and invited her back to his apartment. After a few drinks it transpires that Jerry thinks Jo-Ellen is a prostitute that he’s hired for the evening, which causes some awkwardness when she reveals that she is not (or is she?!?). The two end up sharing a connection that takes them into the next day when Jo-Ellen’s brother Chet (an expressive TJ Chelsea) shows up, demanding access to Jerry’s bank account. He is accompanied by his business partner Boner (Brandon James Sim, hilarious in the role of an ostensible tough guy John more concerned with his Hollywood fantasies and making sure everyone’s feeling comfortable), as well as Christine and Rainbow (a pragmatic Amanda Armagon and spontaneous Jenna Harder).

Whitby cannily balances playing straight-man to the eccentric characters that surround him while getting strong comic moments of his own, and Pyne is natural and engaged throughout, bringing a surprising and moving emotional heft to the final scene. The rest of the cast is for the most part strong and enjoyably wacky, but the play itself is kind of a doodle, skating along ideas about Hollywood’s role in forging hopeless dreamers and simplistically diagnosing society’s many ills, before Bogosian cancels out the reasoning behind its main conflict in the final scene. He’s thrown together an extended sitcom premise for his beleaguered protagonist to struggle through, and the comic momentum nicely overseen by Bailey’s direction is never quite enough to balance out the feeling of low-stakes and relative aimlessness. Still, if the positive audience reaction at the performance I attended was any indication, the traditional story structure and endearing characterizations may be an effective tonic to the more unusual or introspective of Fringe offerings.

The King’s Castle (B-)
This one really depends on your particular mileage for the slow and thoughtful. The members of the New York Dance Creators have brought their piece about a tyrannical King and the people oppressed by his rule (I think?) to the Fringe, and while the work has some strong moments and focused performances (with the pace picking up noticeably in the second half), it was not quite strong enough to compensate for what is a very low-key execution of an abstract story. My notes include lines like: “the king (?) has subsumed this woman (daughter?)’s selfhood through repetitive dance maybe” and “more spinning now”. A review by “Dance Work 69” quoted in the program emphasizes the quartet’s dancing as constituting “a way of being” rather than representing meaning itself, and it’s probably best to take in the performance on that basis.

The cast of four are mostly divided in pairs for the duration of the show, with Japanese dancers Kasei Inoue and Wakako Ishida performing more physically arduous work that moves back and forth between aggressive and graceful, and sometimes, a compelling combination of both. Androniki Prokopiou, from Cyprus, and Jurandi Silva, from Brazil, spend most of their time together in more straightforward of the plot lines, with Silva’s titular king exerting an oppressive influence over Prokopiou, causing her to imitate most of his movements and remain subjugated to his will. One particular sequence where the two play out a cycle of spinning and snapping is hypnotically strange and intriguing, particularly when the onstage cast suddenly begin calling and responding to the offstage performers. The program doesn’t credit a composer for the pre-recorded electronic tracks that play over the dancing, but it casts an appropriately austere energy over the proceedings. The performance had a few awkward moments early on, like premature entrances and some hissed corrections. As it went on though the precision of the group’s work took hold, and while the story remained for me mostly inscrutable, the quiet beauty of their combined work and the evocative final image did a nice job of delivering us scattered audience members into the late summer night.