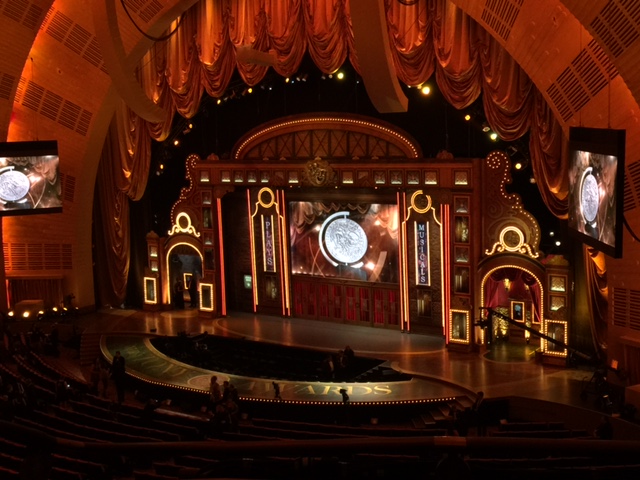 After a few days of recovery (and work), it is time to share some thoughts on the spectacle that was the 2015 Tony Awards. For the first time in years, I saw nearly all of the nominated shows (and numerous shows that failed to make the American Theatre Wing’s list of nominees), so I stepped into Radio City Music Hall with confidence on Sunday night in my gorgeous gown and heels.* This year, I had a strong sense of what would win, what could win, and what should win, and boy was I on the mark, correctly guessing 22 out of the 24 awards.

The Good
Fun Home and Curious Incident Take Top Prize. If you read my reviews of the assumed crowd-pleasing front-runner, An American in Paris, and the difficult but beautiful underdog, Fun Home, you know what show I was rooting for in the race for Best Musical. Fun Home is a strikingly poignant musical with a lush score and gripping lyrics but many have questioned whether a lesbian’s coming of age story, focused on her relationship with her closeted gay father who committed suicide, would capture the attention of mainstream audiences. Some critics surmised that Tony voters would hand the award to An American in Paris with its Gene Kelly-roots for that very reason; however, voters were not swayed and, if the buzz surrounding Sydney Lucas’ spellbinding performance on Sunday is any indication, mainstream audiences will not have any trouble embracing Fun Home.

Best Play also went to one of my favorite shows of the season – The Curious Incident of the Dog in the Nighttime. Curious Incident has achieved critical and box office success in the UK and in the US, and the production is both visually striking and thought-provoking. All that said, a small part of me is saddened that Hand to God failed to win a single award on Sunday. It is a brilliant original play and, in many other seasons, would have won top prize without question.

Women! Ladies led the way this year, garnering big wins in a whole host of categories including Best Direction of a Play (Marianne Elliott for Curious Incident), Scenic Design of a Play (Bunny Christie for Curious Incident), and the Best Original Score (Jeanine Tesori and Lisa Kron for Fun Home). It was uplifting to see so many women recognized in the entertainment industry for a wide array of creative talents (and to see a handful of accomplished female producers on hand as well). Rock on, ladies.

Kelli O’Hara. Best Actress in a Musical was the hotly contested race of the night – a three-way battle between two Broadway mainstays and a Broadway icon. Chita Rivera was an early favorite in award season because of her reputation in the industry, but The Visit has been clinging to life at the box office and very few thought that she would win the Tony. No, the race was really between Kristin Chenoweth in On the 20th Century and Kelli O’Hara in The King & I. Admittedly, these roles do not represent either actresses’ best work, but, with five nominations and no wins, I was pulling for O’Hara. Turns out, so was most of Radio City Music Hall because the crowd roared when her name was announced. It is about time Tony showed her a little love.

On The Town. When I first arrived in NYC, I got chills at every Broadway performance that I saw simply because being in a Broadway theatre was magical. However, after a few years of reviewing shows, the magic wore off. Shows are still enjoyable but attending a show no longer holds the same level of wonder or excitement for me. That is, it hadn’t in quite some time until Tony Yazbeck and the company of On the Town took the stage on Sunday night. Right after Yazbeck belted out the first line from “New York, New York” it hit me: I was sitting at the Tony Awards in historic Radio City Music Hall watching incredibly talented performers sing an iconic song about New York City.

You should have seen the goose bumps on my arms.

Sydney Lucas Kills It. None of the musical performances were more inspired than the starkly staged number from Fun Home sung by young Sydney Lucas. Demonstrating a level of emotional acting beyond her years, 11-year-old Lucas mesmerized the audience with her powerful and heartfelt rendition of “Ring of Keys.”

Hamilton the Musical Advertisement. While television audiences were watching commercials, those of us at Radio City were watching additional award presentations** and watching previews for shows that have already been announced for next season. If you have not yet heard of Lin-Manuel Miranda’s new musical Hamilton, which opens this summer on Broadway, you will. I saw it in March at The Public and have been withholding my review until I see the adapted production this July, but I can say unequivocally that it will revolutionize musical theatre. I am by no means alone in this assessment as was indicated by the reception that the “Got Hamilton” preview received on Sunday. Yes, it was a hilarious spoof of a 1993 Got Milk? commercial, but what was most impressive was the rousing round of applause that the spoof got from the Radio City audience, which is generally busy tweeting/texting/talking during commercial breaks. Get ready America – Hamilton is only a few weeks away from launching previews and becoming a pop culture phenomenon nationwide.

Unaired Content. There were two brilliant Tony Award moments that America missed this year because CBS did not broadcast them. Yes, I am talking about Tommy Tune receiving his lifetime achievement award and the ladies of Fun Home winning Best Original Score – the first women to ever do so. Instead, television audiences were treated to brief, edited glimpses of these events after long commercial breaks. The simple fact is that the Tony Awards is an awards ceremony and not a three-hour commercial for Broadway musicals, so why are key award presentations being ejected from the broadcast?

Poor Performances. Not all of the musical performances this year were good. In fact, some were downright dreadful. Despite a passable performance by the beloved Chita Rivera, the number from The Visit was a head-scratcher (unsurprisingly The Visit and Gigi have both announced that they are closing in the next few weeks), and the abridged Act I closing number “Stronger” performed by the cast of Finding Neverland felt cheesy and overacted (not to mention the introduction was mangled by Jennifer Lopez, Nick Jonas, and Kiesza).

In Memoriam. Given how many times the hosts teased Josh Groban’s performance, I was prepared to be blown away by the powerhouse vocalist. Sadly, Groban began in a key that was far too low, and his performance never really took flight as the In Memoriam names flipped across the screen at lightning pace. Not even the help of a gigantic chorus of talented Broadway vocalists could keep this number from being entirely underwhelming.

Plays Need Recognition Too. The Tony Awards may seem like a giant commercial for Broadway, but patrons should not rely exclusively on the Tony Awards to determine what shows are worth seeing this year. Why? Put quite simply: because this was an incredibly solid Broadway season for plays, which you probably did not derive from the Tony broadcast. While Curious Incident took home Best Play, fellow nominees Hand to God, Wolf Hall, and the now-closed Disgraced are all phenomenal productions. I cannot stress that enough. Best Revival may have gone to Skylight, but either Elephant Man or You Can’t Take It With You could have easily earned the same honor. There is more to Broadway than the musical, yet much of this years’ broadcast was comprised of musical numbers (even numbers from non-nominated shows). Viewers were given only a brief glimpse of each of the play nominees – a tragedy to be sure.

Art Versus Ticket Sales. For many years, the Tony Awards has been seen as a vehicle to introduce audiences around the country to new musicals and the occasional play in the hopes of driving up ticket sales in NYC and bolstering support for a national tour. However, this is the first year that the ceremony felt entirely driven by the need to please investors rather than by the desire to honor the luminaries of the Broadway theatre community for their artistic work. Never during the ceremony was this more apparent than the decision to cut off the Fun Home creative team that had just won Best Musical in favor of bringing on the cast of the Jersey Boys to perform one last unnecessary musical number.

Producers. No, I am not saying that producers are ugly, but the three sitting in front of me who clearly had a vested interest in the musical Something Rotten! behaved atrociously throughout the ceremony. While most of the audience politely applauded the winners, they were swearing and cursing them – even drowning out some wonderful acceptance speeches (I missed part of Michael Cerveris’ carefully crafted speech thanks to one man who apparently thought that Brian d’Arcy James had been robbed). I guess that money does not buy manners.

*One of my fashion-conscious friends scolded me for failing to disclose my clothing designers in past years. For those of you who wait with bated breath for the answer to the question “who are you wearing,” I was in a Marchesa gown with Kate Spade and Nicole Miller jewelry, a Banana Republic clutch, and Jimmy Choo pumps (Eduardo at GLAMSQUAD did a phenomenal job with my hair). For everyone else, I wore a dress and shoes.

** Fun fact: the Tony Awards actually started at 7:15. Home viewers missed a whole 45 minutes of awards prior to the broadcast (plus everything during commercial breaks)!