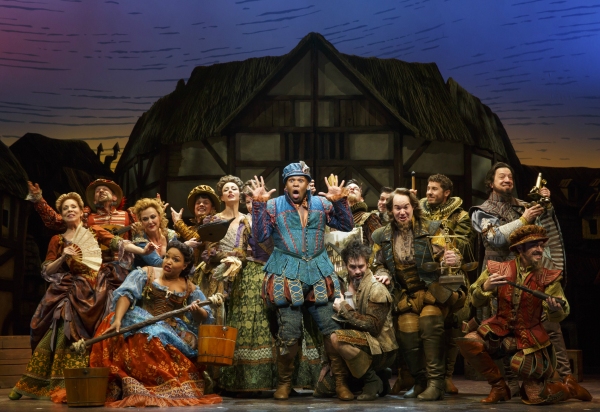 The Bard is back on Broadway – just don’t go looking for any of his plays. No, Shakespeare is actually playing leading man in the new musical Something Rotten! playing at the beautiful St. James Theatre. Something Rotten! is a meta-musical that is just a little too cute for its own good and, ultimately, it is a show that suffers from a lack of originality.

Something Rotten!, written by Karey Kirkpatrick and John O’Farrell, tells the story of the Bottom brothers* who are playwrights in South London in 1595, eager to produce the next great play. Unfortunately, the brothers face stiff competition for theatrical acclaim from beloved celebrity and master of the spoken word: Shakespeare. Nick Bottom, portrayed by theatre veteran Brian d’Arcy James, hates Shakespeare (so much that he sings an entire musical number about it). Socially maligned and facing financial ruin, Nick uses his family’s savings to pay an eccentric soothsayer, Nostradamus, to reveal to him the details of Shakespeare’s next masterpiece. Except, Nostradamus is not quite as good as he lets on – or, maybe he is too good for his own good. Nostradamus informs Nick that he should get working on Shakespeare’s new play before Shakespeare writes it. The play? A new musical called Omelette, of course. You probably see where this is headed. The result is a spectacle that references nearly every Broadway hit (a product of Nostradamus’ haphazard clairvoyance that allows him to see far FAR into the future of theatre). Eggs dance (because its about “Omelette,” get it?). There is a requisite kickline. The musical is goofy and just plain bad. While Shakespeare initially attempts to infiltrate the production, his competitive spirit is quickly replaced by a bemused awe when he sees the whirling dervish that is Nick’s production.

This over the top ode to Broadway is cute. Not fantastic. Not revolutionary. Not a theatrical triumph. Just cute. Something Rotten! is the sort of show that I chuckle throughout but leave without a desire to re-visit my experience or recommend the show as a “must see.” Many of the charming Broadway references and on-going jokes in the first act grow stale by Act II – even tiresome. Moreover, while the premise of Something Rotten! is promising, it is also flimsy and relies significantly on the audience’s desire to play along and restrain eye rolls and/or outward groans. In addition, there is a secondary story line in which Nick’s brother, Nigel Bottom, attempts to woo a young woman in the town. This aspect of the show is nothing more than a traditional “love at first sight” tale that feels both incomplete and contrived. Even Kate Reinders’ exaggerated (and often annoying) portrayal of Nigel’s love interest, Portia, reflects the absurdity of this trope, whether intentional or not.

The musical numbers, written by Wayne and Karey Kirkpatrick, are safe and generally unmemorable but upbeat and fitting for the show. Of particular note is the crowd-pleasing number “A Musical” which is filled with references to musical theatre luminaries and stage blockbusters, including the aforementioned kickline and plenty of other BIG MUSICAL NUMBER choreography and style. It got a quasi-standing ovation at the performance I saw. It was an enjoyable number no doubt, but not one worthy of a standing ovation – about half of the audience appeared to agree with me as the performers on stage stayed in their final poses for an excessive amount of time, as if begging the audience to leap to their feet. It felt less like an ovation earned and more like an ovation extracted.

Stars Brian d’Arcy James and Christian Borle are household Broadway names at this point in their careers, but they are quite different leading men. James has a powerful voice which, coupled with his charismatic stage presence, makes Nick Bottom an easy protagonist to root for despite his consistent ability to make a mess of, well, everything. Then there is Borle. Christian Borle is a tough actor to assess because when I first saw him as Emmett Forrest in Legally Blonde the Musical I thought that he was quite talented. He was an unusual leading man – somewhat inhibited on stage but charming nonetheless and a strong vocalist. Borle has since appeared in Mary Poppins, Peter and the Starcatcher, SMASH, and both of NBC’s attempts to bring musical theatre to live television – The Sound of Music and Peter Pan. After seeing him in numerous roles, I have grown disenchanted with Borle as he tends to give the same guarded performance over and over again. His portrayal of Shakespeare is fine, but he comes across as merely smug when the character could be gregarious and pompous (as his lines suggest him to be). Unfortunately, the humor in the role is lost on Borle. Fortunately, there are other cast highlights, including Heidi Blickenstaff as Nick’s fiercely independent wife Bea and Brad Oscar as the delightfully mad Nostradamus.

Scott Pask’s scenic design is simplistic and takes on a fairy-tale quality – it is more a fantastical vision of what London might look like in 1595 than an accurate period-portrayal. Sets unfold as if tucked away for safe keeping, making some of the transitions clunky. In totality, the design was effective but uninspired. The same can be said for Gregg Barnes’ costumes, although some of the outfits created for Omelette were appropriately horrific (and, therefore, quite entertaining).

While part of me wants to applaud the efforts of Something Rotten!’s creative team for developing a truly new musical on Broadway, another part of me cannot help but wonder what this show might have become had it taken a more traditional route to the St James. Delightful and innovative elements exist within Something Rotten!, but the musical suffers from a lack of editing and a heavy-handed reliance upon humor, characterization, storylines, and creative elements that have been utilized more successfully in other musicals. All things considered, it is not a rotten show, but it is no Shakespeare either.

*Somewhere, the Minions are giggling.