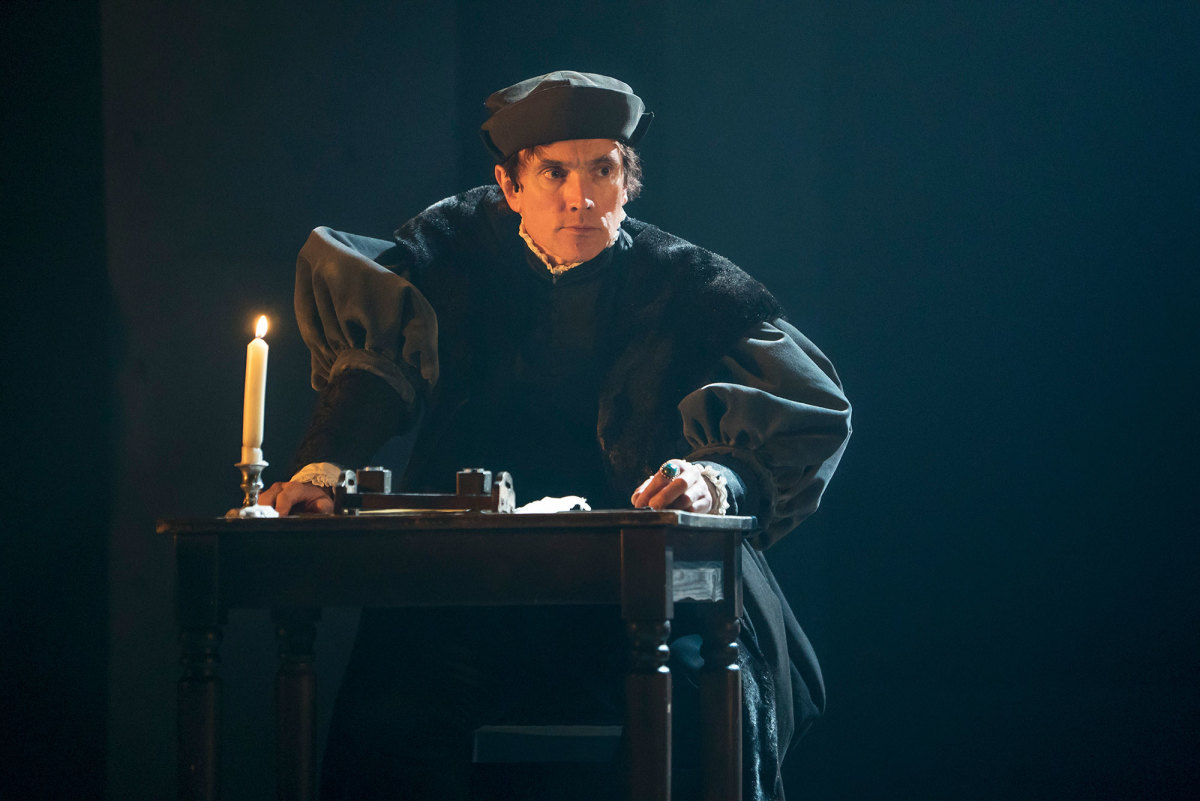 Wolf Hall – Part I and II

Love, lust, power, and control – sounds like the central themes of a new season of the reality show Real Housewives; however those concepts actually unite in the Royal Shakespeare Company production of Wolf Hall, presented in two parts, at the Winter Garden. PBS recently aired a six part miniseries based upon the popular novel of the same name by Hilary Mantel, but RSC’s production is a sight to behold (in person) – a gorgeously staged and riveting play about a well-known historical tale from a less well-known point of view: that of attorney and royal adviser Thomas Cromwell.

Wolf Hall recounts the story of King Henry VIII’s court during the rise and fall of Anne Boleyn from the perspective of Thomas Cromwell – a key member of Henry’s court during the English Reformation. Cromwell is often treated as a somewhat notorious and ruthless figure in history. As a lawyer and chief advisor to Henry VIII, Cromwell was a strong advocate for the separation from the Catholic Church and used his position in the court to further his religious agenda. Cromwell served as Cardinal Wolsey’s right-hand man and it was this position, and Wolsey’s inability to give Henry VIII the annulment that he wanted from Queen Catherine so that he could marry the young Anne Boleyn, that set Cromwell up for his political ascent. Part One: Wolf Hall recounts the demise of Cardinal Wolsey’s career and Cromwell’s efforts to find a legal way to dethrone Catherine and to clear the way for Anne Boleyn to become Queen. Part Two: Bring Up the Bodies details Anne’s inability to produce a male heir and the King’s shifting attention to Anne’s lady-in-waiting, Jane Seymour. Upon the King’s request, Cromwell once again searches for a legal way to rid Henry of his current wife so that he can move on to another.

Set in King Henry VIII’s court, heads are bound to roll in and lust drives the plot of Wolf Hall, but Cromwell is such an enigmatic and complicated figure that these dramatics take a backseat to Cromwell’s personal and professional development. Ostensibly, Cromwell begins as a simple family man and professional – an individual with religious conviction and a respect for the rule of law. He is a trusted confidant for Cardinal Wolsey but, when Wolsey’s power begins to wane, he maintains his relationship with the Cardinal while simultaneously repositioning himself to remain in the King’s favor even after Wolsey is exiled from his advisory role. An extremely bright and diligent man of humble beginnings, Cromwell astutely recognizes political tensions and manipulates situations to achieve his goals, but he does so with a striking loyalty to certain mentors, attendants, and family (the same cannot be said for most of Henry’s inner circle) and an unyielding dedication to the legal code which he has studied so diligently. In other words, he is not simply a Machiavellian schemer in search of power and prestige – he is far more intriguing than that.

The ensemble of Wolf Hall does a superb job of presenting two distinct plays. Chief among them is Ben Miles who, as Thomas Cromwell, almost never leaves the stage. Miles’ indelible performance is gloriously nuanced, smart, and engrossing. Having seen the illustrious Mark Rylance tackle the same role on PBS (an actor who I praised last season on Broadway), I appreciated Miles’ differing approach to the character. Other noteworthy performances include those of Peter Eyre as Cromwell’s mentor Thomas Wolsey who brings a sharp comedic wit to his role and Lydia Leonard as the detestable Anne Boleyn who is so viperous that one struggles to find sympathy for her when she is unjustly tossed by the King. Additionally, Lucy Briers beautifully captures the strength and authority of Katherine of Aragon and Pierro Niel-Mee adds a delightful comedic touch to the play in the role of Cromwell’s servant Christophe. I could go on. Suffice it to say that the ensemble of Wolf Hall is one reason that the American Theatre Wing should create a Tony Award for best ensemble.

The ensemble of Wolf Hall also had a masterful director leading the way. Jeremy Herrin’s staging is nothing short of exquisite with the actors moving about the stage in beautifully orchestrated interactions (also attributable, in some part, to the movement coordinator, Siân Williams). Despite the large cast, every actor on stage appears to have a purpose in each scene, and Herrin’s ability to compose scene transitions in a play that makes significant leaps in space and time is quite extraordinary. Moreover Paule Constable and David Plater’s lighting design is quite striking and complimentary to the narrative. Of course, as a period piece, the costumes designed by Christopher Oram are gorgeous, as is his sparse yet functional set design. Overall, the entire creative team behind Wolf Hall made noteworthy artistic contributions to the production.

Undoubtedly, Wolf Hall is a rich story adapted for the stage by Mike Poulton, and the cast and creative team of the Royal Shakespeare Company has developed an elegant production worthy of such riveting source material. Catch this production before the limited run ends on July 5!